To say two-time NHRA Pro Mod champion Stevie “Fast” Jackson is looking for redemption at the 2023 Drag Illustrated World Series of Pro Mod would be an understatement. The drag racing veteran, known for speaking his mind and talking trash to his fellow competitors, is no stranger to the WSOPM – the newest installment at Bradenton Motorsports Park will be his fourth event.

“With the previous World Series of Pro Mod being in Denver, I feel like you got people that were serious about big-money door car racing out there, but I also think you limited yourself to only people on that side of the country,” Jackson said. “Having the World Series of Pro Mod at Bradenton Motorsports Park at that time of the year, you’re going to get the mecca of door car racing all in one spot.”

Jackson also made it known that the fans will play an integral part in the success of the WSOPM. It’s already been proven with the demand for tickets and media buzz.

“That’s what the fans want. That’s how the fans win the event because you’re going to have the best of the best in door car racing,” Jackson continued. “Pro Modified race cars are the hardest thing on the planet to drive – they’re the most unpredictable and require the most skill. That’s why people pack stands that have Pro Mod door car races.”

Fans are in for a treat as star racers from across drag racing are set to descend upon Bradenton Motorsports Park March 3-5. Winning the WSOPM will be no easy feat – the $100,000 winner-take-all cash prize, and of course, the bragging rights are a big motivator for the invitees. Only the 32 quickest cars will qualify out of a field of 40-plus.

According to Jackson, his phone has been “ringing off the hook” by racers wanting to buy parts for the WSOPM.

“I can tell you from an insider in motorsports and a guy that’s got his finger on the pulse of drag racing – it’s been a while since I’ve seen this much industry-wide excitement about one event,” he said.

He continued, “That’s a gauge of how excited the rest of the field is. At the end of the day, that’s what gets me excited. You’ve got people that are good at what they do coming there, and I want to go crush them.

“Then you have fluffers like Keith Haney, who will show up and be four-tenths behind the field, and everyone will crush him,” stated Jackson. “I also like to come and watch that.”

The 2023 WSOPM will be an eighth-mile outlaw format. Jackson typically competes in the NHRA Pro Mod series, which runs a quarter-mile race. However, he’s ready to take on the “grungy, wild, and out-of-control experience” of eighth-mile racing.

“I like the elite nature of quarter-mile racing. NHRA Pro Mod is the folks that are at the top of door car racing out of every organization. That is the people that are the best,” Jackson said. 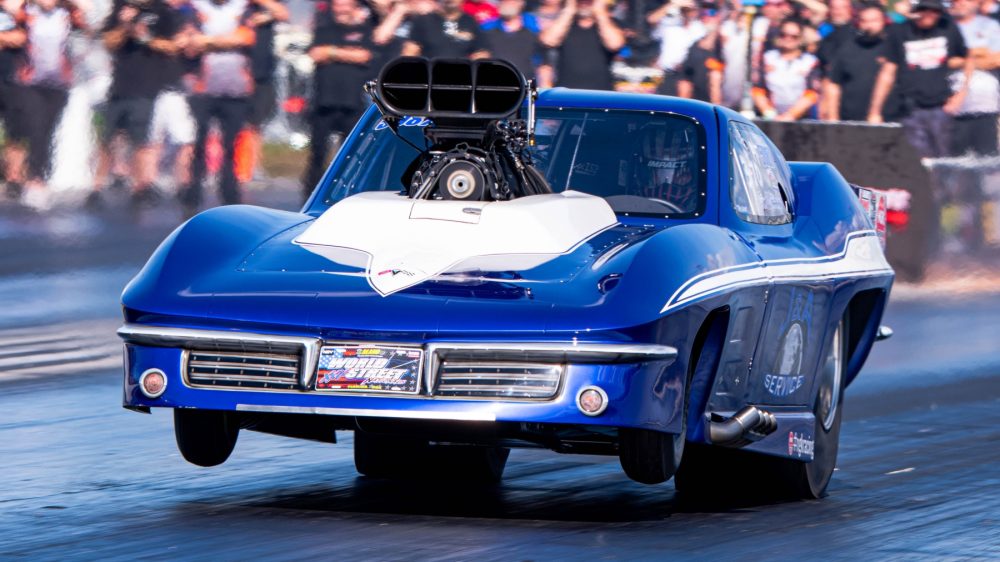 Jackson, fresh off of neck surgery and inking a new partnership with Sidnei Frigo, is ready to take the WSOPM by storm. After all, it can be argued that he’s one of the best Pro Mod drivers in the world. However, it will be time to prove himself at the WSOPM after his first three appearances were nothing to brag about.

“All three years, I had the car to beat at the WSOPM! It was stolen from me all three times,” Jackson exclaimed. “One time, I red-lighted, and two other times I had mechanical failure because the voodoo racing gods were mad at me for racing in Colorado. Eventually, stuff will quit falling off, and I’m going to crush the field.”

Lastly, Jackson shared his admiration for those that make races like the WSOPM possible, including the fans. “I appreciate all the companies that put in the extra work to put these events on. It requires a village to make deals like this successful,” said Jackson.

“More than that, I want to thank all the fans who come out to spectate an event like this. The place will be sold out, and they’ll have to close the gates for this event. The fans are the boss, and if anybody ever forgets the fans are the boss, they can go do something else; pick up ping pong or something,” he said, ending his statement in true “Jackson- fashion.”

Fans can watch the WSOPM on CBS Sports in April 2023. For more information and to purchase tickets to the invite-only Drag Illustrated World Series of Pro Mod, visit www.WorldSeriesofProMod.com.