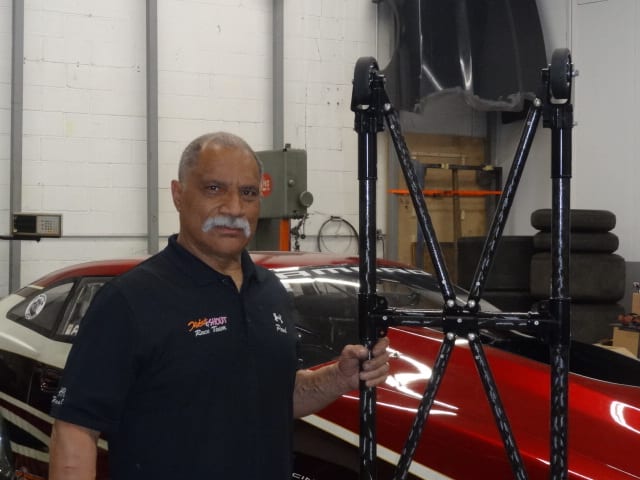 A life in racing has served Paul Pittman well, both on and off the track. Racing in a number of different sportsman classes, as well as Pro Stock, Pittman claimed the 2016 NHRA Division 5 Top Sportsman championship in his Twist & Shout Racing 2013 Camaro.

That success has led to a growing customer base for his Twist & Shout Racing Products and Chassis Shop, which recently expanded into a new, bigger shop in the Minneapolis area.

Working with the late Don Ness and developing a strong friendship with the famed chassis builder provided the building blocks for Pittman taking the next step in his own business. Pittman has furthered Ness’ ideas and plans with his new carbon-fiber wheelie bars, while his engine chillers continue to be an impressive hit for racers in a variety of classes.

Now with a full-blown chassis shop, Pittman talked to Drag Illustrated about his journey, and how he’s been able to stand out in the marketplace.

How have you been able to find your niche in the industry and how has being a racer helped in that regard?

That allows us to get our product to the track, so people can come get the stuff they need. We ran Pro Stock for 3-4 years and now we run Top Sportsman. We’ve won races, won a divisional (title), so we get a lot of people who want the same stuff as our car. The car and the results, what we’ve done is a big reason people come to us. We kind of cater to the sportsman racer, particularly the Top Sportsman racer. We started catering to those drivers and also the budget-minded racer who still wanted high-quality work.

One of the newer products that you’ve introduced is the carbon-fiber wheelie bars. What is the story behind that?

Don was the first to design them, and he was a friend and employer. He came out with them initially, and when Don passed away, we decided to carry on the wheelie bar part of things. The only thing we changed is we went to a different vendor for the carbon tubes. We felt there was more strength in their carbon, so we wanted to improve on the bars and still keep the same design.

What has you most excited about their potential?

It’s weight. Through the years, the wheelie bars kept getting bigger and bigger. They started going to titanium, and that puts you up there in cost. You’re saving 35 percent or more of weight (with the carbon-fiber wheelie bars) and you can take 25-30 pounds off the car. So you’ve got a big weight reduction, and it’s a lot cleaner, high-tech looking. Plus, it’s a done deal once you get these. You don’t have to worry about anything down the line. You don’t worry about them bending or anything.

You have a strong presence in the pits and at races. Why is that important to you and what difference has that made?

When it comes to your chillers, how have you been able to separate yourself?

There’s a couple around, but they’re not as nice as ours. We make it a neutral color, so it blends in with any car. But that’s also the benefit of being there. For a turbo car, we make an engine chiller with a transmission plate so you can cool the engine and the transmission down at the same time. So it pays dividends to be there and understand and figure out this type of stuff. If you get into the third round and beyond, you need a chiller. In particular, you can bring the temperature down from 150 degrees to 55 degrees in less than 10 minutes, making sure you’re not going down the track hot.

Looking at your journey, how satisfying has it been to get to this point where you’re able to cater to racers with products you’re passionate about?

it just keeps getting better everyday, especially when you look around and see your stuff there in the pits. We’re straightforward with people and we have a good reputation, and that’s a big deal and something we’re proud of. Our chillers, our wheelie bars, people say the craftsmanship is second to none. That’s not me, that’s just what we’ve learned. People like nice stuff and we make nice stuff. The quality in our work is something we take a lot of pride in.