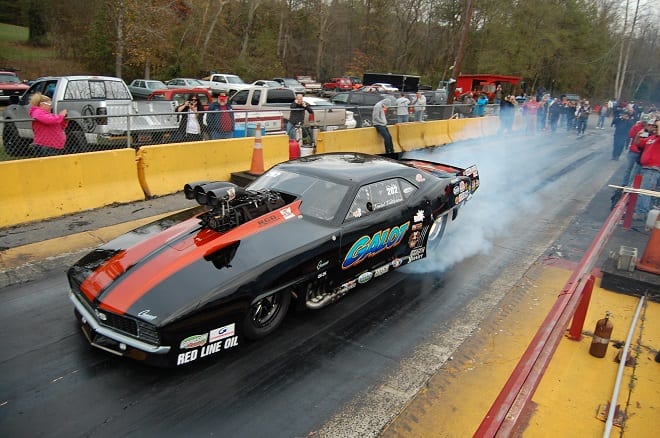 Todd “King Tut” Tutterow made a stellar impression on all that were watching him pilot his GALOT Motorsports ‘69 Camaro to a world record for Roots-blown Pro Mods at an amazing 3.69 ET at 202 mph during the Carolina Xtreme Pro Mods race held at Shady Side Dragway this past weekend.

Tutterow qualified number one with the record-breaking 3.69 ET to take on number eight qualifier, Jeremy Creasman. In the semifinals, Tutterow ran James Linton and in the finals ran a 3.76 @ 199 to grab the win over Alan Pittman’s 4.15 @ 158 at the Shelby, North Carolina track.

”We had a great time at Shady Side and I want to thank Ronnie Buff and his crew for a good track surface,” Tutterow noted. “We needed to test the New Ty-Drive transmission. Along with the Hammer Supercharger, it looks like we might be on to something. My crew has done a great job this year and we are looking forward to great things to come.”

The previous record for a Roots blower was held by Tutterow’s GALOT teammate, Kevin Rivenbark. Rivenbark set the record at Piedmont Dragway during the EOPM/Big Dog Shootout in October at a 3.713 ET at 198 mph.