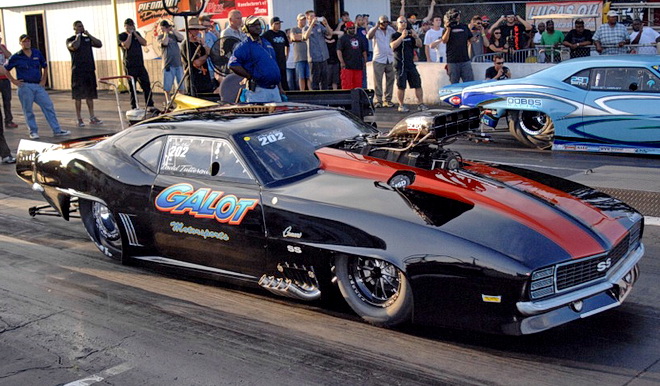 It seems like Mother Nature has been doing most of the winning this year at North Carolina’s historic Piedmont Dragway. Inclement weather cancelled the Big Dog event for July outright and the June race was interrupted by rain with only four cars left to run for the trophy that resembles a bulldog.

So last Thursday (Aug. 7), during this month’s Big Dog gathering, Todd Tutterow (above) and Keith Floyd were left to settle the postponed June final in the second round of qualifying. In a battle of supercharged Camaros, Tutterow took the win with a 3.83 pass defeating a red-light start by Floyd. 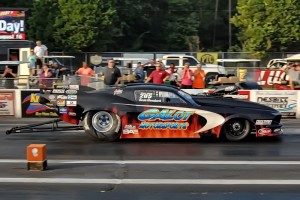 That finished, with the Extreme Outlaw Pro Mods also in the house at Piedmont, the Big Dog qualifying list featured some old and new names. Among those new to the season at Piedmont were Extreme Outlaw Pro Mods (EOPM) points leader Tommy Franklin in his nitrous-boosted ’69 Camaro, Dale Brinsfield and his Corvette tuned by Charles Terrell, Todd Howard at the controls of Jerry Williams’ new Mustang, Ronnie Gardner, and the GodFather of Pro Mod, Charles Carpenter and his conic, nitrous-fed ’55 Chevy.

Qualifying resulted in some surprises as Lucas Oil Shootout and multi-time Big Dog winner Chris Rini failed to qualify, running only a 4.07 that was simply not quick enough to crack the all-three-second field.

Tutterow’s 3.83 put him on the pole, while his GALOT Motorsports teammate Kevin Rivenbark placed third at 3.88, with Franklin between the two with a 3.86 pass in his Pat Musi-tuned machine, and rounding out the top half of the eight-car field was Jay Cox with a 3.90 in his Charlie Buck-tuned Camaro.

Fifth place went to the new Camaro of Danny Perry at 3.91, with sixth going to Travis Harvey’s Russ Farmer-tuned “Carolina Kid” Camaro at 3.93 seconds. Seventh was Randy Weatherford at 3.96 and at 3.98 in the final slot was Carpenter, who seemed to have not lost a step in tuning or driving despite not regularly competing for several years.

First-round racing action was highlighted by a perfect .000 light by Harvey, only to lose to Rivenbark’s quicker 3.90 ET, followed by Franklin using an excellent .013 light and a 3.83 to easily defeat Weatherford’s 3.96 effort. Tutterow then ran a 3.85 to end Carpenter’s day and Cox made a 3.89 pass to defeat Perry. 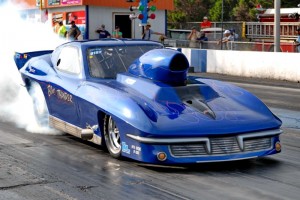 The semi-finals were highlighted by Rivenbark cutting a .001 light to defeat Franklin’s quicker 3.81 with a 3.87, before Tutterow posted and off-the-pace 4.31 after Cox broke.

That set up an all-GALOT final and Rivenbark picked up where he left off after winning the PDRA Pro Boost race a couple of weeks earlier at Dinwiddie, Virginia, by posting a .016 light and a 3.87 to get by Tutterow’s .061 and a 3.90 ET. Top-speed honors for the event went to an impressive 198.06-mph pass by Franklin.

Renegade Eliminator that night saw the class of the field running each other in the final, with Jamie Chappell marching from his number-one qualifying spot to defeat number-two starter Tim Lawrence. Other winners included Shaun Carpenter in Outlaw Doorslammer, Clay Fulcher and Jason Marshall in in 6.0 and 7.49 index classes, respectively, and Jacob Baker in Jr. Dragster.

The EOPM will run one more combo race with the Big Dog regulars in October.