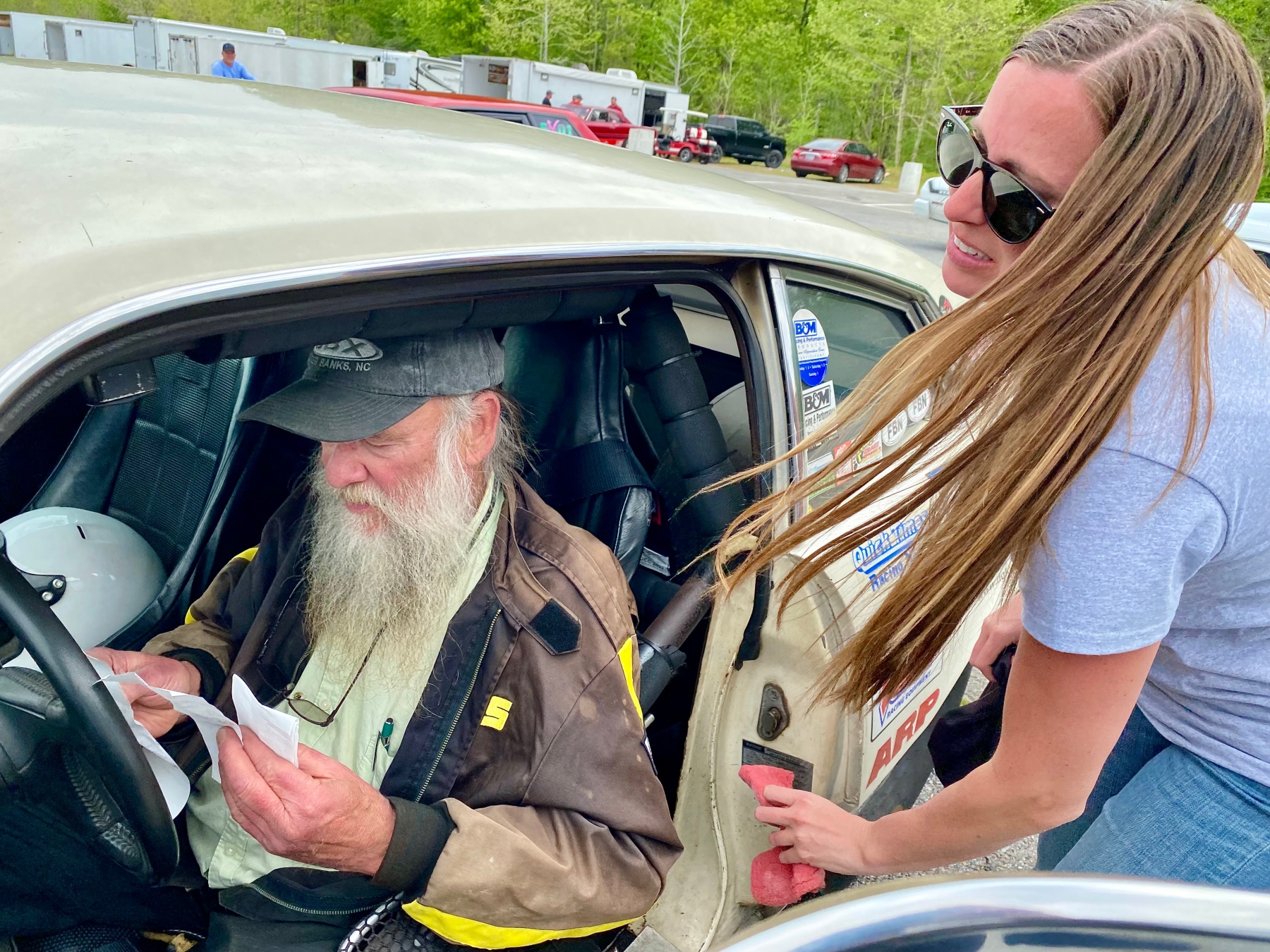 When people ask Francis Reynolds Jr. how many times his classy 1970 Ford Maverick has been down the track, Reynolds studies on the question for a moment before usually answering “A lot” – accompanied with a hearty laugh.

In 2022, Reynolds celebrates 53 years of drag racing…51 of them have been behind the wheel of his vintage Maverick. Prior to that, he was tagging along with his father and watching him race at tracks such as Colonial Beach and Sumerduck, both in Virginia. “Dad raced a 1961 Ford Station Wagon, and also a 1956 Ford that he bought for 50 bucks!” recalls Reynolds. It was behind the wheel of the classy ’56 Ford that Reynolds made his first-ever pass down a dragstrip at Colonial Beach in 1969 soon after he got his driver’s license.

Reynolds always knew that drag racing was in his blood, so he began saving his money to buy his own car, and soon afterwards the Maverick entered the picture. In June of 1971, he traveled to Lexington Park, Maryland, where a car dealership was located, and there sat the Maverick (just one year old at the time) with 12,000 miles on the odometer. A deal was struck for the sum of $1,200, and Reynolds drove off in the 6-cylinder Maverick.

“I bought the car midweek and then took it to a service stations – not a gas station – we actually worked on cars back in those days,” he laughs. They put the Maverick on a lift and cut off the muffler, and a local guy made him a couple of tow hooks. The following Sunday he was at Colonial Beach racing the car, and it’s been on the track ever since. 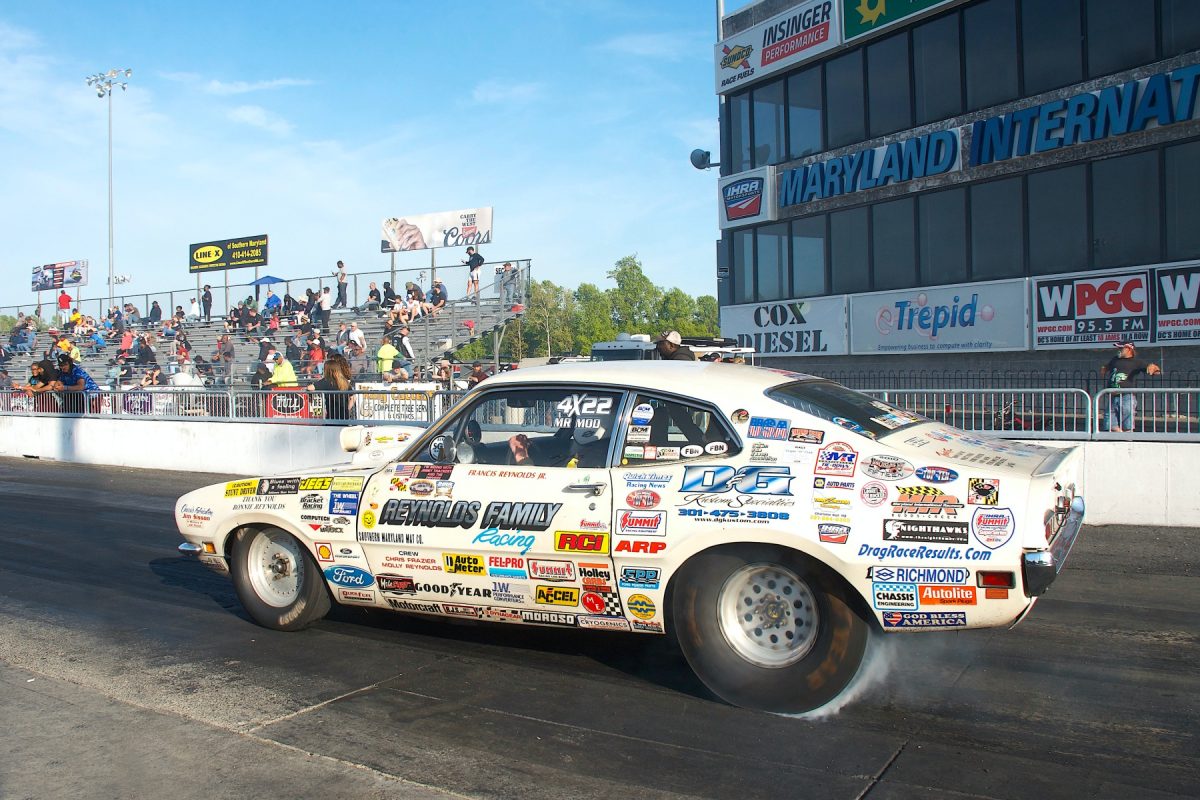 Back in those days, Stock Eliminator classes were all that was available. “You’d run your class, win a trophy and go home,” he remembers.

Among the most entertaining stories Reynolds tells from the early days was the night he got into the money rounds for the first time. Reynolds is a life-long native of southern Maryland, and usually went south to Virginia to race, but on this particular occasion he traveled north to Capitol Raceway in Crofton, Maryland. Soon after arriving, they informed Reynolds that he had to have a helmet to race, which was a problem since he didn’t even own one. “Back home you didn’t have to have a helmet at the tracks I raced at,” he laughs.

Reynolds asked around and nobody had an extra helmet. Things were looking pretty bleak when suddenly he spotted a man and woman riding in on a motorcycle. “I went up to this perfect stranger and asked him if I could borrow his helmet and he said I could!” As fate would have it, Reynolds began stringing together win after win on a track he’d never raced, all while wearing a stranger’s helmet.

“I felt bad because this went on until close to midnight,” he says. “I was in the finals, and I looked up in the grandstands and everyone had gone home except the couple who let me borrow the helmet…they were the only ones left!” He won $50 that night, and promptly split it with the man who let him borrow his helmet. “I bought a helmet after that,” he laughs.

Another memorable outing was winning the 1977 NHRA Division 1 Bracket Finals while competing in Heavy Eliminator. The event was held at the fabled dragstrip in York, Pennsylvania. Reynolds was no stranger to long road trips in those days, and he toured the car extensively in decades past. “I’ve been to Gainesville, Orlando, Palm Beach, Bristol, the Carolinas…even went way out to Byron, Illinois, back in the 1970s.” 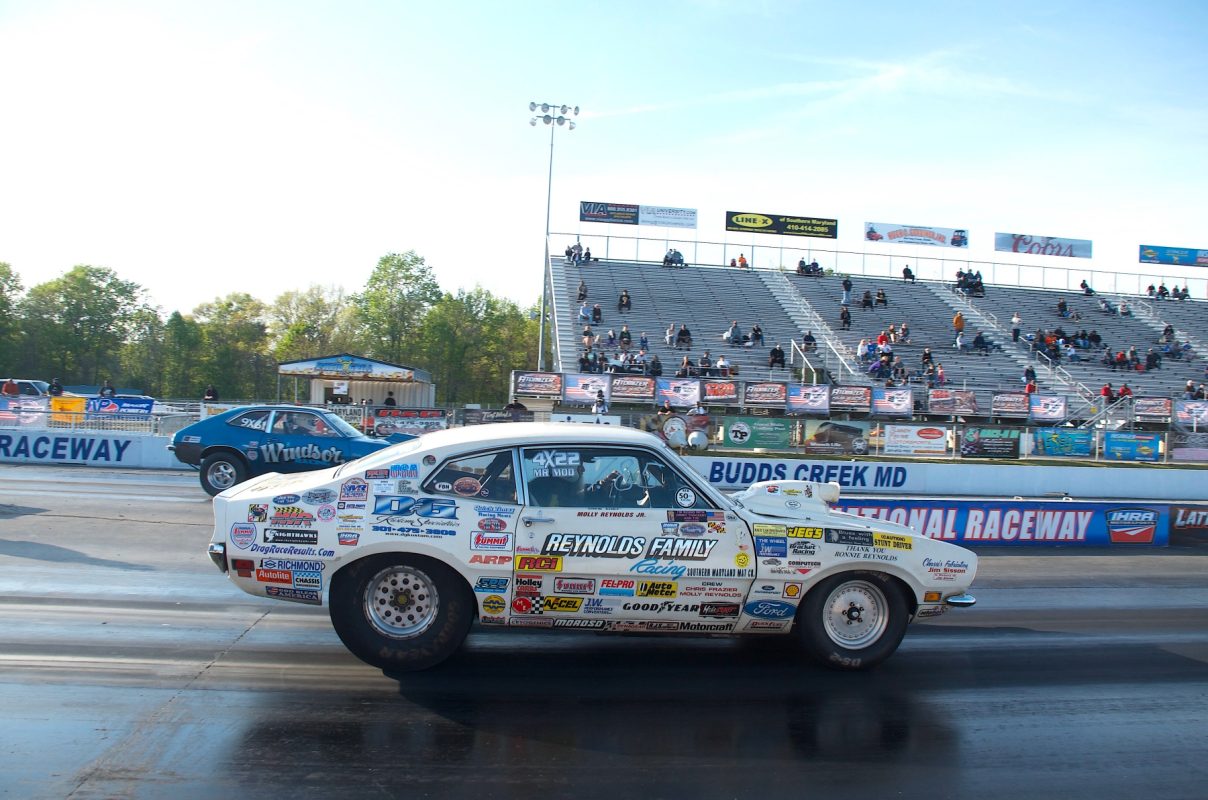 As Reynolds approaches 70 years old, the competitive fire is still in his belly, but it’s awfully tempting to just race close to home, especially when a facility as nice as Maryland International Raceway is less than five minutes from his house.

These days, the Reynolds Family Maverick is something of an iconic car, covered in decals and seen weekly at MIR. The car has undergone a variety of engine swaps over the last half-century. Following the 1977 upgrade to a 302ci powerplant, Reynolds outfitted the Maverick with a series of 351 Clevelands that he had difficulty keeping together.

Afterwards, he found success with a couple of fast 460 engines, followed by a bone-stock 460 that came out of a Mercury he used to tow the Maverick with. “That engine had 280,000 on it when I put it in the Maverick, so after about eight or nine years I was getting kinda scared of it, so I wound up buying another 460 engine from a junkyard for $300.” That was the last engine transplant the Maverick has undergone, which was around 2013.

The car has been painted three times in all the years Reynolds has owned it, always sticking with its original factory color of Wimbledon White. “I believe by 1989 they were calling it Colonial White…same color with a different name,” he says. Its most recent respray was 33 years ago after his brother-in-law back-halfed the car first, then put a new front end on it. Since then, a steady flow of decals has been applied, each serving as a constant reminder of the best of times spent at the dragstrip.

His daughter, Molly, is always by his side, and has basically grown up at the dragstrip. “No better place to raise a daughter,” smiles Reynolds. “Molly and I have been by ourselves since she was 5 years old.” It comes as no surprise that Molly followed in her father’s footsteps, drag racing at their local Maryland International Raceway. 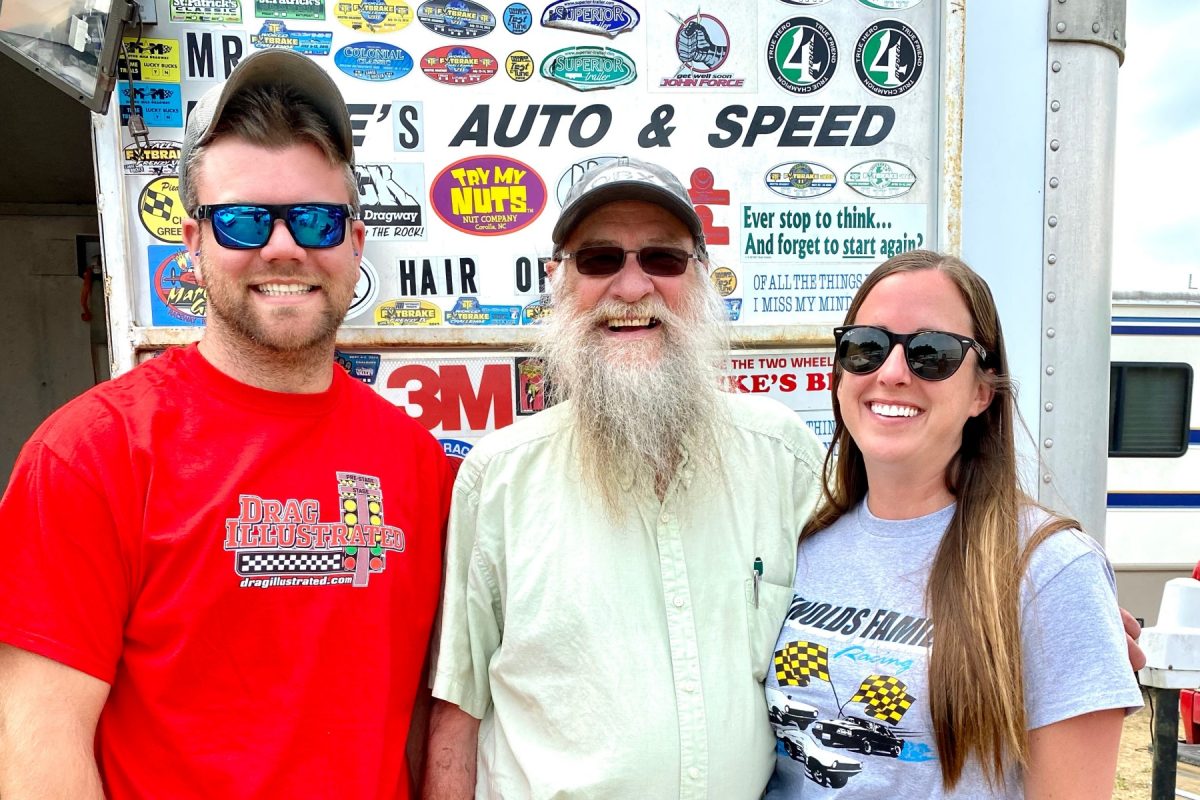 She started racing her great-looking 1991 Fox-body Mustang in 2020, and got her first win the following year during the Midnight Madness event. “Molly and I both race in the Modified class. We’ve never met in eliminations, but we hope to meet in the finals someday,” says Francis. Molly’s boyfriend, Gary Hill, comes to the track and cheers them both on. Win or lose, it’s the most fun they could possibly have in a weekend.

Reynolds treasures the family he’s made at the track and the people who’ve impacted his life through the years. “I met Luke Bogacki about a decade ago, and he’s a true gentleman, not just in drag racing but in life. There’s always something you can learn from Luke, and I’m glad I was able to sit down and get to know him,” says Francis.

And so it goes, every weekend Francis and Molly gather up their cars and head to the track. Francis couldn’t imagine being anywhere else…or driving any other race car. “I kinda got a feeling I’ll finish up my racing career in the Maverick,” he laughs.