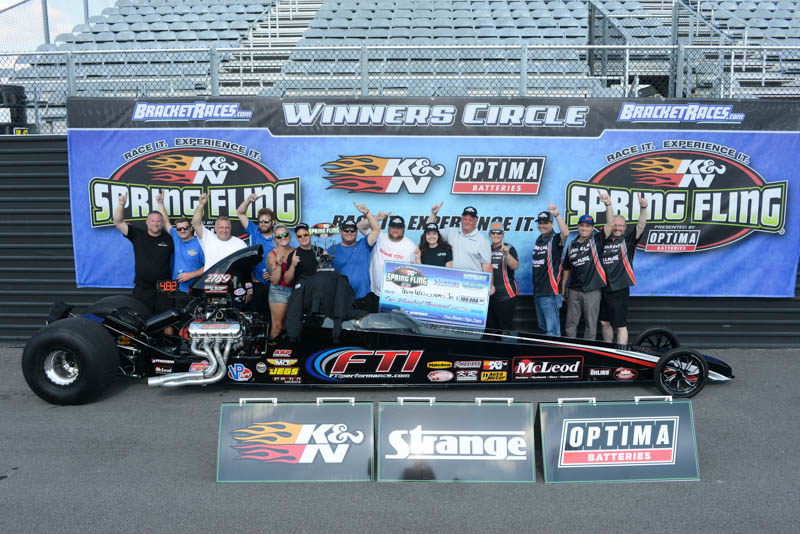 Day Last of the K&N Spring Fling GALOT presented by Optima Batteries was upon us and it was a sort of weird event.

What was originally scheduled as four separate races paying $15K-$25K-$100K-$25K to the winners had to be curtailed when Mother Nature threatened to intervene. As has been reported in earlier race results, the entire purse from the two $25K races were combined and paid $50K to one winner who ended up being Josh Luedke from Boonville, Indiana. Due to heavy storms on Thursday, that race was completed yesterday after which the Strange Engineering Friday $100K race began.

Because of the late start on that race, only one round along with the buyback round was completed last night with the balance of the rounds completed today.

With $100,000 on the line, once again over 380 racers made the first round call and has been the number all week, round seven consisted of nine cars; Leon Robertson, Richard Wilk, Joey Harrison, Dan Fletcher, Hunter Patton, Josh Baker, Parker Dotson, Kyle Cultrera and Troy Williams. In that round with an odd number of cars, Dotson will have the bye run into the quarterfinals.

Round seven survivors were the very red hot this year Patton, perennial high-dollar winner Williams, Harrison in his Mustang, multi-time NHRA champ Fletcher driving his Chevelle wagon and Dotson in his dragster. Three dragsters against two door cars with Patton on the bye in the quarters, followed by door cars against dragsters; Williams against Harrison and Fletcher against Dotson.

Unfortunately, Dotson broke on his bye run and couldn’t make his date with Fletcher. Harrison then red-lighted to advance Williams, and Fletcher took his unearned bye run. In the semis, Williams received the bye into the final, while Patton and Fletcher battled it out. 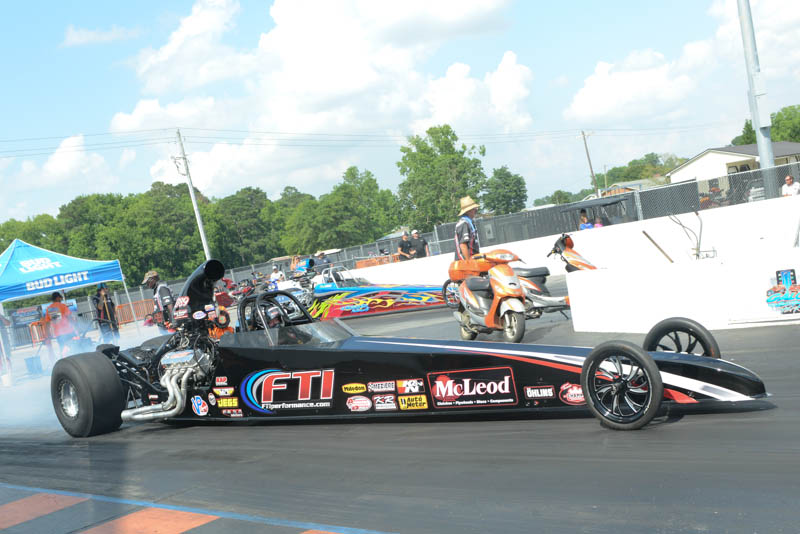 With the field narrowed down to three cars left, the decision was made to award Hunter Patton the Todd’s Extreme Paint MVP Award, voted on by the Fling staff as the person who was most consistent in turning on win lights all week. The award carries a custom-painted Spring Fling MVP helmet along with a check for $1,000, courtesy of Todd’s Extreme Paint. Going into the semis, Patton showed his talent and still had some work to complete.

Unfortunately for Patton, he ran into “this guy named” Fletcher. A better reaction time by Fletcher was all it took to move the man who has been a little dry on NHRA national event wins for the last year, now moving into his biggest bracket racing final round with $100,000 on the line. But first he had to deal with another big time winner in Troy Williams.

The final for $100,000 and by virtue of the dial-in, Fletcher left first but lit that big red cherry at the bottom of the ‘Tree by -0.003. And the two-time Spring Fling winner; make that now three-time; cruised to another big win.

“I’d guess you could say we were a little concerned on Tuesday when the weather forecast looked so grim,” said co-promoter Kyle Seipel. “We were sorry we had to make the schedule adjustment but it just appeared to be the right decision. And then the weather forecast turned around. But the racers accepted the change and we couldn’t be happier with the outcome. We are so thankful for each and every one of them who had the confidence in us to put on a great event. Thank you from the bottom of our hearts!”

All week long the MotorManiaTV crew was on hand live streaming the entire event thanks to JEGS and Hoosier Tires. Next up on the Fling schedule is the Sparco Fall Fling presented by Optima Batteries in Bristol, Tennessee, September 29 to October 3. Both Peter Biondo and Kyle Seipel are still working with the Las Vegas Motor Speedway to reschedule the Spring Fling Million which unfortunately had to be postponed from April. For more info and news, stay connected to www.bracketraces.com.