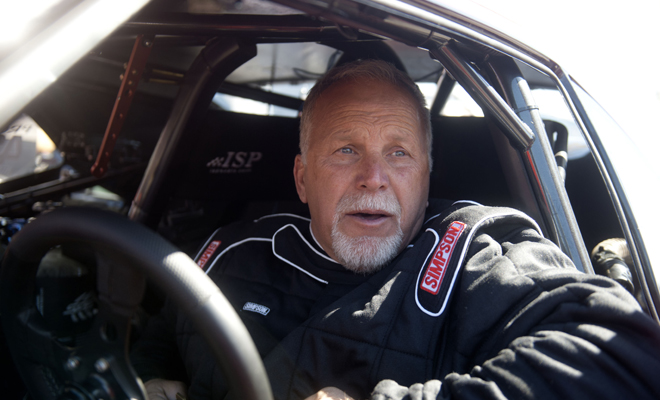 One of the biggest names in NHRA Pro Mod racing – and the most successful driver in the class – won’t be in Las Vegas this weekend.

Rickie Smith has chosen not to race at the annual NHRA Pro Mod finale at The Strip at Las Vegas Motor Speedway, citing a number of reasons.

The three-time NHRA Pro Mod world champ and 15-time event winner isn’t in the championship hunt this year after experimenting with a turbo combination early in the year. He’s back to his nitrous roots, currently sitting fourth in points, but Stevie “Fast” Jackson already clinched the title in Charlotte.

That may be one reason he’s not traveling across the country to race, but it’s not the only one.

In a surprising turn of events, longtime teammates Smith and Khalid Al Balooshi are also no longer working together, a sudden move that stemmed from Al Balooshi’s disqualification in Charlotte.

AlBalooshi’s run of 5.717 at 256.89 was thrown out and the team was disqualified from competition. Tuner Brad Personett passionately denied any type of wrongdoing and was supported wholeheartedly by Al Balooshi in the aftermath, but Smith wasn’t buying it, which led to a parting of company between the longtime friends.

“I’ve known and helped AlBalooshi for 14 years and I’ve never been thrown out of a race,” said Smith. “They went their way, I went mine. That’s all there is to it.”

NHRA officials identified an oddity they took issue with on Al Balooshi’s turbocharged Camaro – an air line ran to the atmosphere-side of the turbocharger waste gate – and interpreted the move as illegal. Smith also took umbrage with the move, leading to the rift. A loose fitting on the NHRA’s mandatory boost controller has also become a point of contention.

“I don’t have a history of being thrown out and stuff like that, and I’m not going to tolerate it at this stage of my career,” Smith said. “I’ve spent a lot of years with (Al Balooshi), but he decided to go with (Personett). That’s his choice and we went our separate ways.

“I told Balooshi on three different occasions that I believed there was an issue with his car, that it wasn’t right, and he chose not to acknowledge it,” Smith concluded. “So, here we are.”

Following that, Smith weighed his options to make the trek to Vegas, ultimately deciding to stay home. With that incident weighing on his mind, Smith also said Vegas’ conditions have long not been conducive to nitrous cars. The title has already been decided as well, leaving Smith out of reasons to race in Las Vegas.

“It’s not a good place to run a nitrous car,” Smith said. “I just figured I would stay at home, save $10-$12,000 and get ready for next year. It’s going to be a little weird because I’ve supported this class from the word go.”

Smith estimates it’s the first NHRA Pro Mod race he’s missed – minus when he injured his back – since 2011, but the variety of swirling issues will keep the veteran from racing in Vegas.

But he’s been plenty busy, putting together a major sponsorship deal for the 2020 NHRA Pro Mod season. He’ll be back campaigning his nitrous car and Smith will announce the deal at the PRI Show in Indianapolis in December.

“When that came together last week, it was an awesome feeling,” Smith said. “They jumped right on board and I’m so proud to have a company like this. It’s a done deal – inked and done – and we’ll debut it at PRI.”

Smith also could be busier than he’s been in recent years.

Along with trying to race for a fourth NHRA Pro Mod world championship in 2020 in his nitrous-powered Camaro, Smith plans to compete in some PDRA Pro Nitrous races.

He’ll use the massive Musi Racing Engines 959 cubic-inch engine for those races, but it’s another challenge Smith will look to tackle in 2020. After going back to his nitrous roots, things came together quickly in 2019. He qualified No. 1 at two straight races, including Indy, made two straight finals and won in St. Louis, putting at least one good note on what has undoubtedly been a strange, tumultuous season.

“I learned some stuff and found a few things, and it’s improved my deal,” Smith said. “We have something to work on and test this winter, and I want to get better in my PDRA program, too. It’s a bad-ass class, nitrous on nitrous, so I’m excited to get out and test and work on things.”