These seven words were the theme of Travis Pastrana’s Top Fuel dragster experience. Pastrana’s resume is extensive. From X Games gold medalist to motocross racer, then NASCAR driver and rally racer, and now offshore boat racer, but one thing that wasn’t on his list was drag racing.

“I don’t know much about drag racing. I don’t know a lot about anything that has 11,000 horsepower,” Pastrana confessed. “I thought, ‘I’ll put my foot to the floor, four seconds keep it straight, nothing to it, no problem.’

“Then I got a call from Tony Stewart at 10 o’clock at night,” he said. Stewart, former NASCAR and IndyCar champion turned NHRA Top Fuel and Funny Car team owner, called Pastrana to offer a bit of advice. Stewart had previously experienced driving a Top Fuel dragster for the first time in 2021. Stewart told Pastrana that he needed to start familiarizing himself with the procedures that go along with driving a Top Fuel dragster as soon as he arrived in Charlotte, North Carolina.

Enter the theme for the experience. “You don’t know what you don’t know,” Stewart told Pastrana. “Everyone thinks they have a plan until they get punched in the face.” Stewart, along with Alex Laughlin, Scott Palmer and Leah Pruett, started preparing Pastrana Sunday night as soon as he landed. Pastrana was to drive the Top Fuel car on Monday, and they didn’t waste any time teaching the adrenaline junky.

Pastrana and crew were at the track until 2 a.m. Monday morning, practicing the staging procedure in a rental car. They explained to Pastrana the different G-forces he would experience and what the car would be doing as it makes its way down the track.

“They said you’ll feel 4-Gs at the beginning, then it will go 5-Gs, and then 6-Gs as you get more aerodynamic and the weight goes all the way down on the rear wheels,” Pastrana recounted. “They also said you have to go wide open the first time. It won’t work if you go half-throttle.

“You’re basically driving on an 11,000-horsepower bomb,” Stewart told Pastrana. “Then Tony goes, ‘the key part there isn’t even putting your foot to the floor. The thing handles pretty good, but your butt will feel what’s going on, but your brain isn’t going to process it.’”

Stewart confessed to Pastrana that after 13 runs in a Top Fuel dragster, he still had no idea what was going on. “That scared me, and that was when the reality set in,” Pastrana said.

However, when Pastrana was still feeling confident Monday when he got to the track and was ready to get in the car. An NHRA official told Pastrana that he would start by going 150 feet. “150 feet? Weak!” Pastrana thought to himself.

“I finally get in the car – my chin is strapped down, my head doesn’t fit. I feel like Donkey Kong in Mario Kart! We got the steering wheel on sideways so I can get my knee to clear the brake far enough, so I stop the car when it starts going,” he explained.

“I started to panic,” Pastrana confessed. “I’ve never panicked before or felt claustrophobic. I don’t get claustrophobic unless you’re in a foam pit, upside down with your foot over the back of your head with fuel dripping, and someone yells fire,” he joked.

Pastrana’s thoughts continued to spiral as he remembered his team “delicately described this vehicle as a bomb.”

“I’m thinking, ‘my wrist is fused, and I can’t get to the latch to unhook.’ The back spasm started to kick in, I couldn’t breathe, and I got all this stuff on. I’m like, ‘Bob, get me out. Get me out, Bob!’ It didn’t even start yet, and I’m getting out,” Pastrana chuckled.

Stewart reassured Pastrana this happens all the time. “They asked if I could get back in, and I was like, ‘I have to.’” Pastrana was reassured by everyone around him at zMax Dragway that he didn’t have to go through with it. 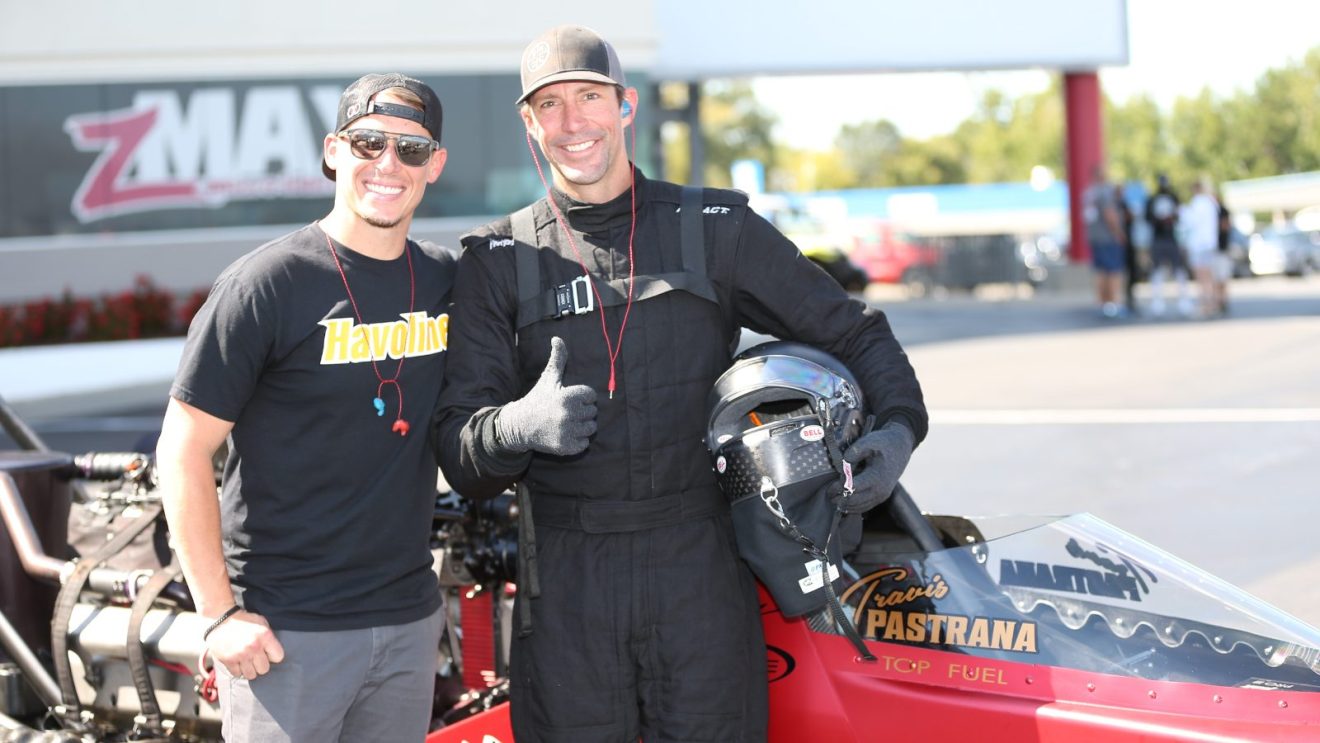 Pastrana, who has stared fear in the face time and time again, thought to himself that his “no fear” attitude might be changing. “I’m thinking, ‘I’m getting old, and I’m panicking.’ I haven’t even started this thing yet – let alone gone down the strip yet. I’m claustrophobic and completely lost my mind.”

It was then that the thought of Pastrana’s father, a former Marine, entered his mind. “I’m like, man, if I say I didn’t go down this dragstrip and if I say I’m claustrophobic and couldn’t even deal with being in the vehicle, he’s going to kick my ass. He’s 73 years old, and he can still kick my ass.”

It was through the fear of Pastrana’s father that he found the strength to get back in the dragster and continue with what he had set out to do. “I calmed myself down. I got hooked up and wedged back in, and I’m like, ‘I’m going to do this.’”

Pastrana began the staging procedure for his first run in a Top Fuel dragster. He even detailed how he accidentally hit the throttle when backing up and “almost shot back at 100 MPH.”

“I did a good burnout with the tires but couldn’t find reverse, so they had to push me back,” he said. “I finally got up to the starting line, lined up and hit the gas pedal, and felt exactly what Tony was saying.

“I felt everything that was happening, but my brain wasn’t processing. It felt literally like Star Wars. Warp mode. Everything got narrow – I got squished to the back, and all of a sudden, my mind caught up to what was happening, and I got the perma-grin. I was like this is awesome… and then they shut it down right as the G-force started to pick up more,” Pastrana explained of his first launch in a Top Fuel dragster.

Then Palmer and his crew rebuilt the motor, and it was time for round two. Everyone was optimistic about Pastrana’s second attempt, as his first 150-foot attempt was a success. “Back to claustrophobic again,” Pastrana said as he remembered climbing back in the confined cockpit.

“It went worse,” he said, describing his second launch. “I didn’t quite line up perfect… had a bit of a wheelie going… made a correction right away, and my foot came off the gas.

“I blew it – definitely disappointed,” Pastrana said. However, it was a major win for everyone participating in this exciting day.

“Everyone was pretty excited at the end of the day. This was something that was so much above any beyond I could’ve ever imagined,” he said. “It’s truly remarkable. I hope to go and watch an event. Thanks to everyone that was involved.”