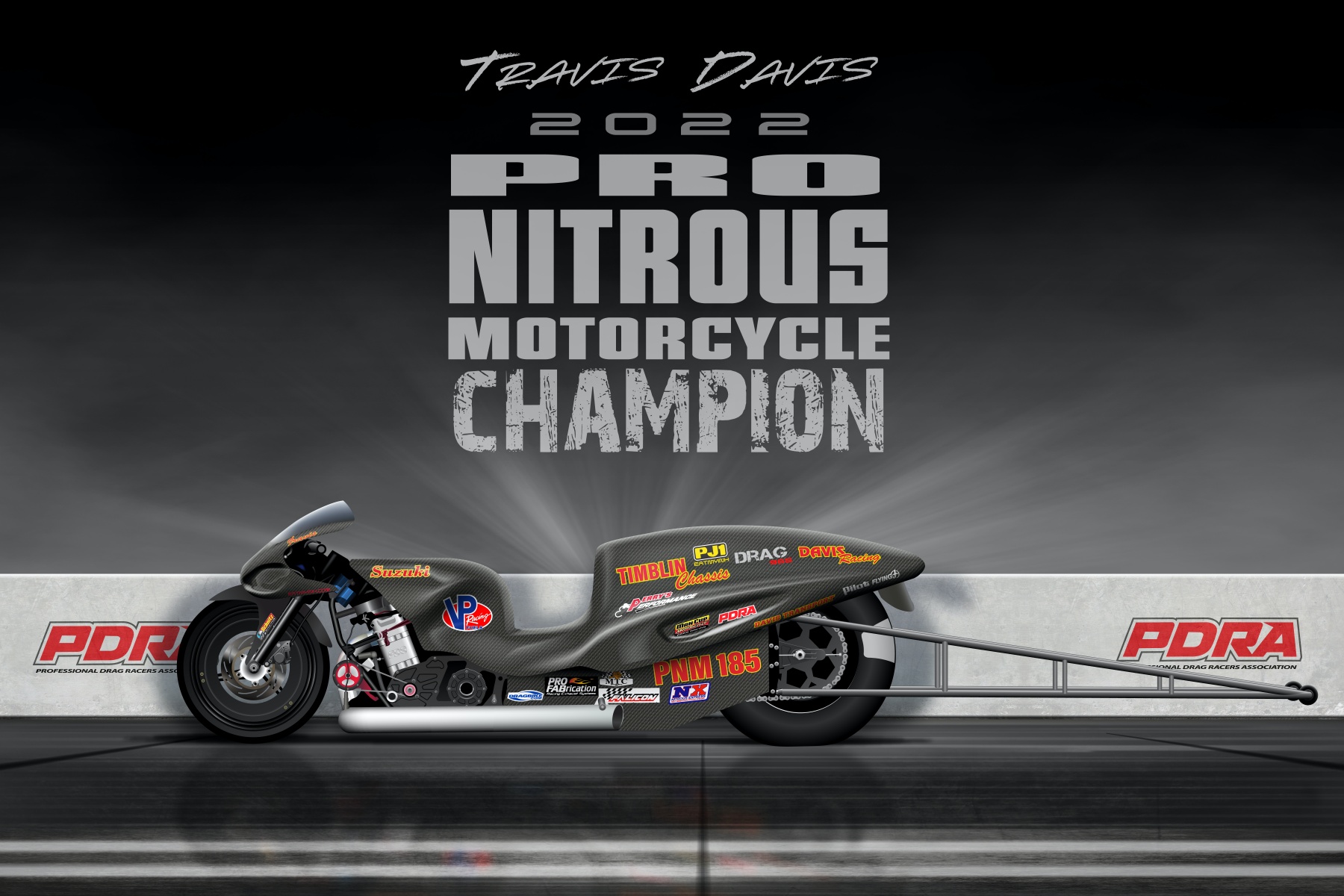 “Winning the championship was kind of unexpected, to be honest,” Davis said. “To win four of them, I’m proud of our team and everybody that helps me. We really weren’t focused on the championship, just trying to develop a new engine and take a little time off, but we managed to do it. We didn’t go to the Ohio race, so any time you start skipping races, championships usually aren’t in play. But the races we did show up at, we either won or went rounds and put ourselves in a position to do it. You try to win them all, but you’ve got pretty stiff competition to do that.” 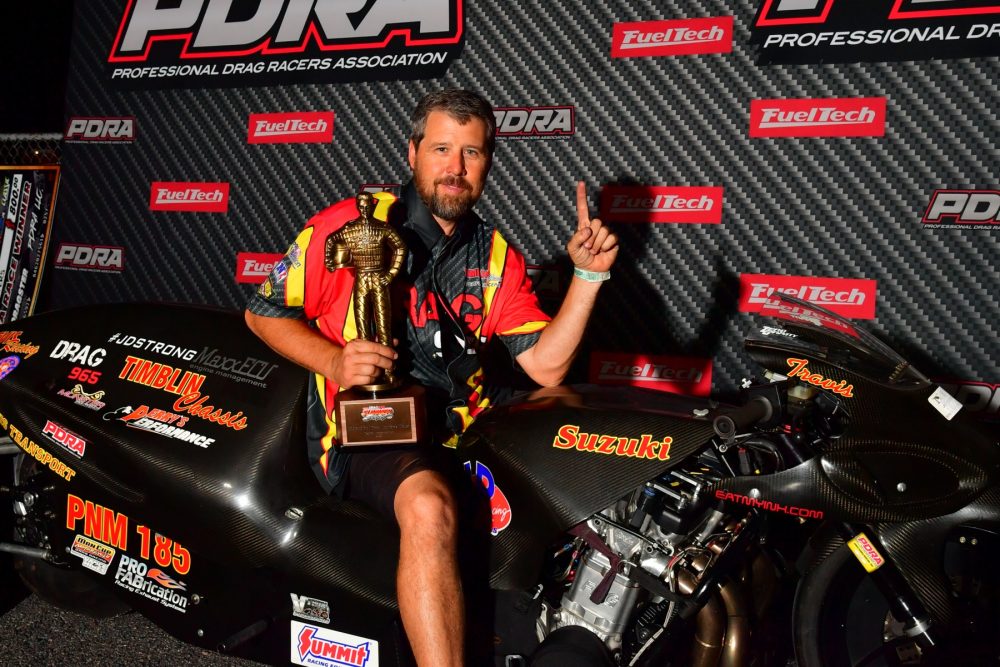 The Virginia win was unexpected, as Davis didn’t originally plan on running the race. Weather delays allowed Davis and his team, primarily wife Brandy and son Brayden, to make the trip from the NHRA Jr. Drag Racing League Eastern Conference Finals in Bristol, Tennessee, to VMP for the Summer Shootout.

“That was the gamechanger in the championship,” Davis said. “The way things worked out, we saw that we could make it there in time to qualify and race. I didn’t even have a can of gas or a spare motor, just had the bike in the trailer. Had we not done that, the championship definitely wouldn’t have happened.”

Weather plagued the next two races for the Pro Nitrous Motorcycle class as well. DragWars at GALOT was canceled due to Hurricane Ian, then persistent inclement weather forced the cancellation of the Proline Racing Brian Olson Memorial World Finals presented by ProCharger at VMP before the Pro Nitrous Motorcycle final could be completed. Davis lost in the semifinals, giving him no choice but to wait and see if defending world champion Chris Garner-Jones could beat Paul Gast in the final round. That was the only way Garner-Jones could pass Davis for the championship, but weather conditions didn’t allow PDRA and VMP officials to prepare the track for that final or the other World Finals late rounds.

“I never really get very emotional about points or championships,” said Davis, who thanked Brandy and Brayden, as well as supporters like Dan Wagner with DTM, Walt Timblin with Timblin Chassis, Steve Nichols with Maxx ECU, MTC, Paul Gast with Fast by Gast, Worldwide Bearings, and Monster Race Products. “If it’s meant to be, it’s meant to be. With the weather that was coming in and us having to get back for our son’s schooling, we just had to leave [after losing in the semis Sunday night]. Me and Paul [Gast] butted heads in the second round and he went 3.99, I went 4.00, and he beat me by one thou at the stripe. He’s tough, he’s fast, and we are too.”

Davis is still working out his plans for the 2023 season. He could choose to defend his championship, or he might give 16-year-old Brayden the chance to get his feet wet in Pro Nitrous Motorcycle. The third-generation drag bike racer is already riding his dad’s Pro Mod-style bike in a 4.60 index class to prepare for a future PNM debut. 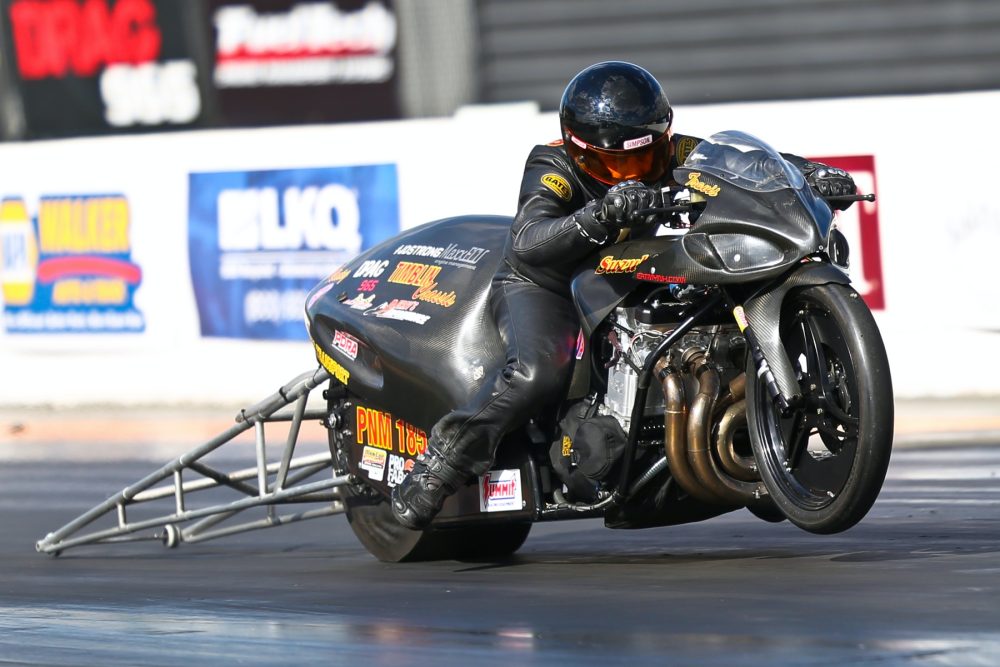 “If he does start riding, he will be a major threat for the championship right off the get-go,” Davis said. “He has the desire to win as bad as anybody I’ve ever seen. I think when the time comes and he does get on there, he’ll find himself in the winner’s circle pretty quick.”

Garner-Jones, the championship runner-up, started his title defense season with a win at the East Coast Nationals. He suffered an uncharacteristic DNQ at the Maryland race, then bounced back by qualifying No. 1 and reaching the final round at the Summer Shootout.

The PDRA will celebrate Davis and the other 2022 world champions at the annual PDRA Awards Banquet on Friday, Dec. 9 during the Performance Racing Industry (PRI) Show in Indianapolis.