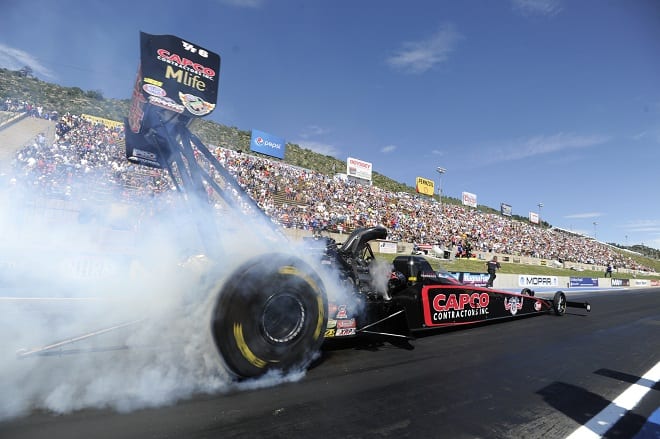 Steve Torrence raced to his first Top Fuel victory in over two years Sunday at the Mopar Mile-High NHRA Nationals at Bandimere Speedway.

Torrence powered his Capco Racing/Torrence Motorsports dragster to the winner’s circle with a 3.925-second performance at 319.37 mph to earn his fifth career victory, first at Denver and first since Bristol 2013. Torrence, who defeated Tony Schumacher’s 3.940 at 305.08 in his U.S. Army dragster, earned the seventh spot in the Traxxas Nitro Shootout at Indianapolis. 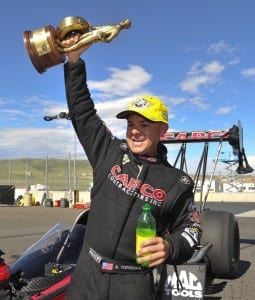 “I thought I saw him ahead of me, and I said to myself, ‘No, don’t pull this on me,’ ” said Torrence, who moves to ninth in points. “I saw him out there for a little bit and then he disappeared, and I thanked the good Lord when my win light came on because we needed this win. We needed to get back into the Traxxas showdown. Tony and I are friends, but when you run a DSR car, you have to bring your A-game. To beat him on the mountain is unbelievable. It’s been way too long to get into the winner’s circle. It’s not representative of the team we have. I’m getting confidence in myself, and that’s a good thing.”

Schumacher, the current Top Fuel points leader and No. 2 qualifier, raced past Steven Chrisman, Clay Millican and Brittany Force before falling to Torrence in the finals. He holds an 85 point advantage over teammate Antron Brown.

Beckman powered his Infinite Hero Foundation Dodge Charger R/T Funny Car to the win for the fourth time this year with a 4.190 at 293.92, beating John Force in the final. Beckman, the 2012 world champ, has 19 career victories, putting him tenth on the all-time wins list in Funny Car. This is his third career win at Bandimere Speedway.

“”(My crew chief) Jimmy Prock intimidates the other crew chiefs,” said Beckman, who moves to second in Funny Car points. “He’ll force them to do things they may not be comfortable with. Last year, I was 0-6 against JFR, so I figured I had paid my dues. To do it in the final round today, when they really had the better car throughout the weekend – to beat the No. 1 qualifier, the winningest driver of all time, and at the Mopar race – this is just a perfect weekend.” 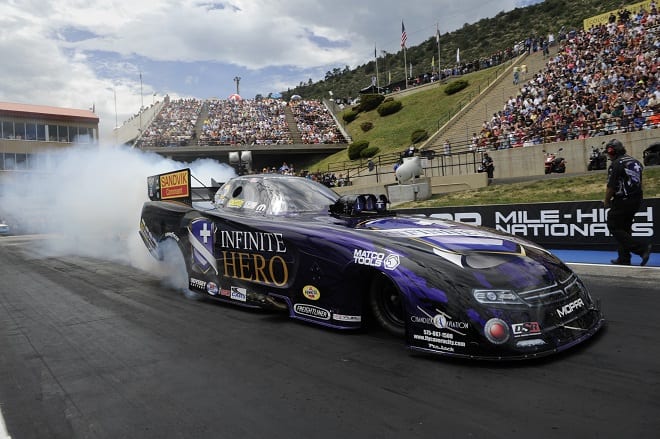 Force was appearing in his fourth final round appearance of the season and second against Beckman. Force, a six-time winner at Denver, entered eliminations as the No. 1 qualifier and jumped to third in the Funny Car point standings.

In Pro Stock, Morgan raced to a final round holeshot victory over three-time defending winner Allen Johnson with a 6.944 at 199.02 at the controls of his FireAde Chevy Camaro. With the win, Morgan earned his 12th career victory and second of the season. The final featured an intense staging duel at the starting line, lasting one minute and 45 seconds before Johnson finally staged.

“What a wonderful race!” said Morgan, who won his first Denver event in 1990. “This was probably my best win this 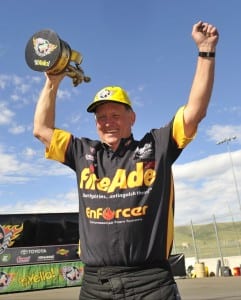 year. The Four-Wide (event) was cool because I got to beat three guys at one time. Coming up here and racing Allen, though, I give those guys all the respect in the world for being in the final round nine straight years. Nobody will ever do what he’s done up here, and I commend him for that. Those guys are still the ‘King of the Mountain.’ I just got lucky enough to keep it for one race. He still owns this place.”

Johnson, who was appearing in his fourth final of the season with one win, was looking for his fourth consecutive victory at Thunder Mountain.

Krawiec raced to his 28th career victory in Pro Stock Motorcycle with a 7.239 at 185.51 holeshot final round result over Hector Arana Jr. on his Screamin’ Eagle Vance & Hines Harley-Davidson. The current Pro Stock Motorcycle points leader earned his first win of the season and third at Bandimere Speedway.

“In the final, I could hear him next to me,” said Krawiec, a three-time world champ. “I will say one thing; I knew I had to be about .020 on the Tree, and I was .025. I usually don’t race that way. I don’t usually have to push that hard, but this year I do. I really didn’t want the final to be that close, but I couldn’t ask for any better. It always makes the driver look good to win on a holeshot.” 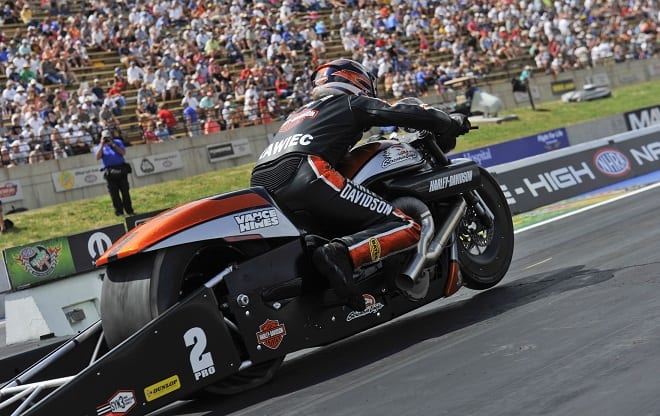 The NHRA Mello Yello Drag Racing Series moves to Sonoma, Calif. for the second of three stops during the NHRA Western Swing for the NHRA Sonoma Nationals, July 31-Aug. 2.