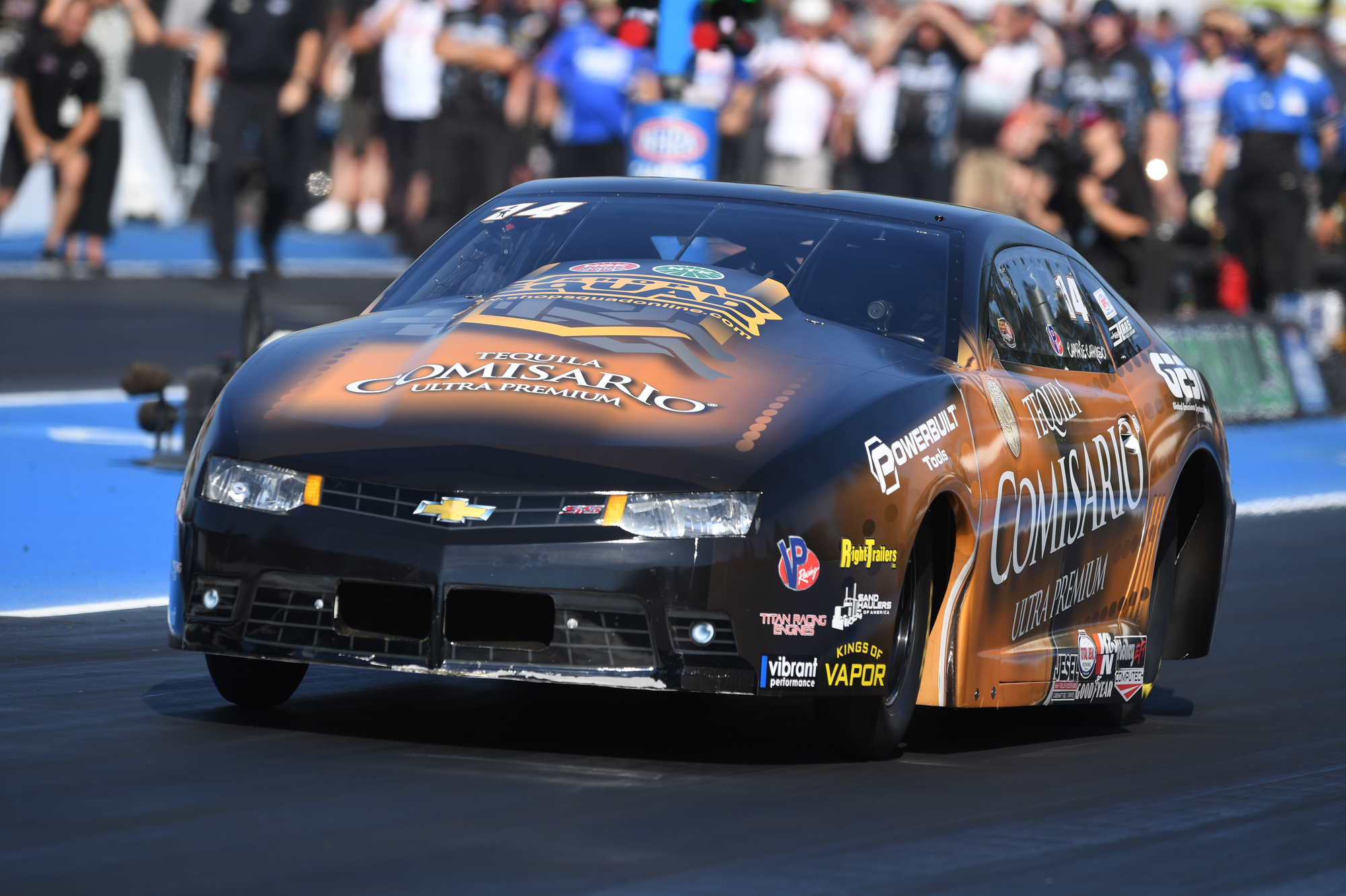 The first-year pro has already made a name for herself securing her first career No. 1 qualifier and racing to the final round of the SpringNationals in Houston. She has held fast to a position in the ultra-competitive Pro Stock top ten throughout the season and is looking to make a move up the standings with a strong showing this weekend in Topeka.

“We had some tough races in the Western Swing, but we made progress and I think we will keep improving this weekend in Topeka,” said Caruso, who is a third generation drag racer. “(Crew chief) Jim Yates has a strong tune-up and I can’t say enough about the Titan Racing Engines power we have under the hood. I am getting better behind the wheel so we will be ready to go this weekend for sure.”

The young driver who resides in Denver, North Carolina, has put together one of the strongest single car Pro Stock operations in recent memory. In October of last year Caruso Family Racing announced they would enter the Pro Stock category and they made an immediate impression qualifying in the top half of the Winternationals field and winning their first round of competition at the NHRA Arizona Nationals in just their second national event. Since those first two races Caruso has raced to five more quarterfinal rounds or better this season.

“My goals haven’t changed and the success we have had this season has only given me more confidence that we belong at this level,” said Caruso. “We are working at every race to get better. The guys at the shop are busting their butts between races. I am on the phone almost every day with potential marketing partners for this season and next season. I have to thank Tequila Comisario for the five races they are sponsoring us including this weekend in Topeka. I am chasing my dream of a Pro Stock world championship one race at a time.”

Caruso is in the midst of a tough battle in the middle of the Pro Stock point standings. The 24-year-old is currently sitting in seventh place just 43 points out of fifth place. The jump to fourth place is just 105 points away. When the points reset following the U.S. Nationals Caruso could be within two or three rounds of the top spot. Following the Menards Nationals Caruso will have one more chance to make a move up at the U.S. Nationals in Indianapolis which will feature points and a half for all the competitors.

“I would love to go into the Countdown in fourth or fifth place because basically you are right behind the point leader,” said Caruso. “From the beginning of the season I said I wanted to compete for the championship and win races. We have a team that can win races and that will be our focus this weekend in Topeka. This is a quick and fast track. Jim won this race twice in Pro Stock so that gives me a lot of confidence as well. A win this weekend and then another good showing in Indy could be huge for our team.”

The first year Pro Stock team has built its program on consistent runs and strong marketing relationships. Caruso has been instrumental in finding funding and marketing partners since the October announcement. The season has been sustained with support from Powerbuilt Tools, GESI, Vibrant Power, Chevrolet, and VP Racing Lubricants as well as new additions like Sand Haulers of America and most recently Tequila Comisario and NGK’s Shop Squad program.  Throughout Shop Squad’s five-race run as major associate marketing partner automotive professionals can visit:  www.shopsquadonline.com to register. Use code RACE22 for a chance to win a Solo Stove with NGK conducting one drawing per month.

“We have had an awesome race car this season and I have to thank all our marketing partners for their support,” said Caruso. “I know as a young team it is important to represent on and off the racetrack. We are constantly promoting all our supporters and this weekend in Topeka will be another chance for us to introduce ourselves to so many new fans.”

The Tequila Comisario Chevrolet Camaro will take to the track for the first time on Friday afternoon for their first qualifying session. Saturday will feature two more qualifying runs followed by final eliminations on Sunday starting at 10:30 a.m.. The race will be broadcast nationally on FS1 from 2 p.m. – 5 p.m. ET.