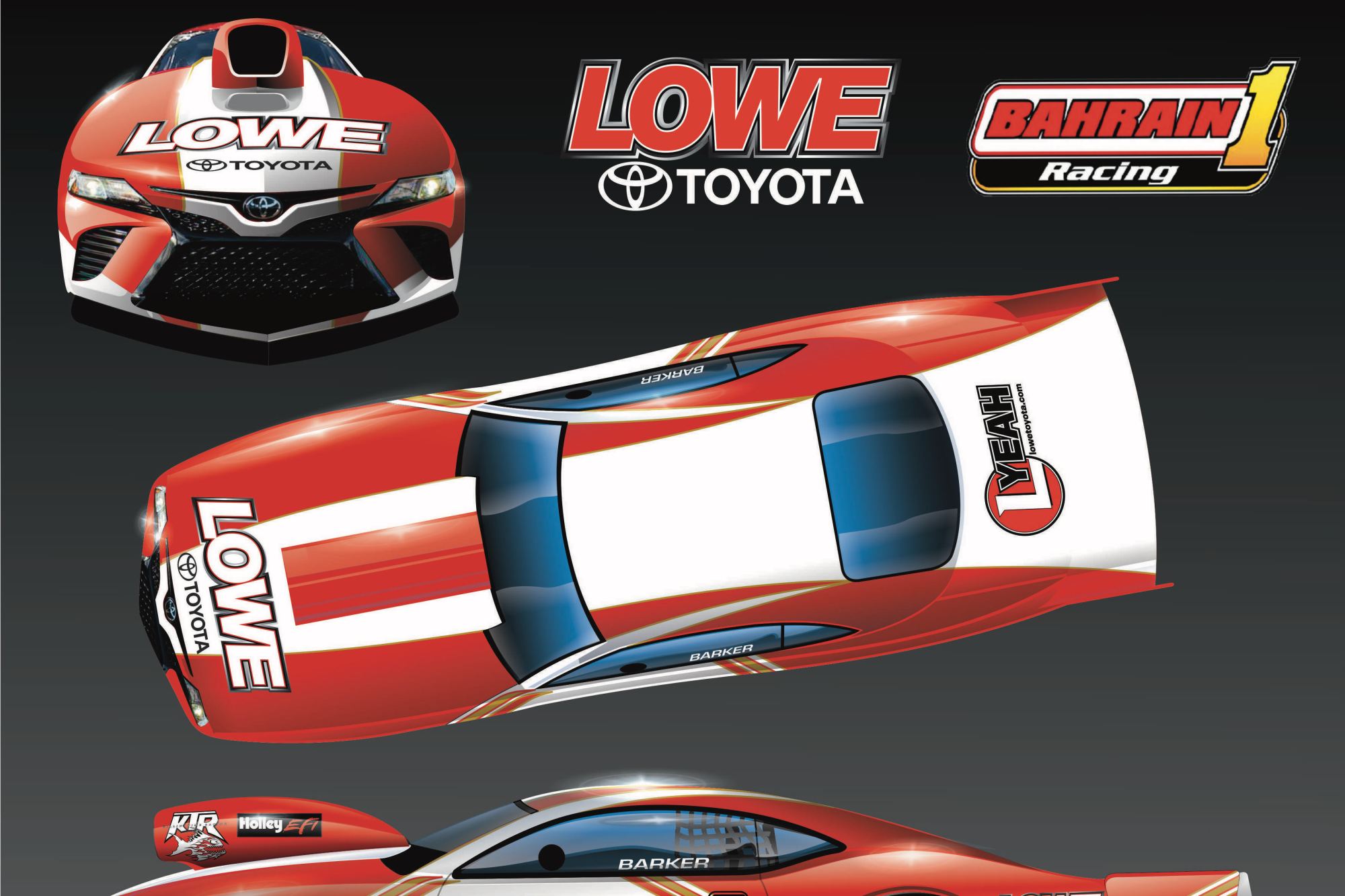 After racing his ’18 Camaro at the three Indy races, Gainesville and St. Louis last year, Barker had the car rewrapped with a new 2021 Toyota Camry look over the winter.

“I ran Pro Mod at a select number of races last year and Lowe Toyota was behind me for a few races on that deal,” said Barker, who also had Lowe Toyota on his twin-turbo GXP in 2018. “They’re a local Toyota dealership that we’ve been connected with for quite some time. They like drag racing and want to be involved. For it to make sense for them to be involved, the car needs to look like a Toyota.”

Barker struck up the deal with Jeremy Smith, the new owner of Lowe Toyota. Smith worked at the dealership for several years before taking on the ownership role after the December 2020 passing of his grandfather and the previous owner, Wayne Lowe. Smith got his first look at the NHRA Pro Mod scene last year and knew he had to get involved on a bigger level.

“I went to the Gatornationals for the first time ever and got a behind-the-scenes look at what goes into making the car run and everything they look after. It was amazing,” Smith said. “I’ve known Jeffrey and his dad, Jerry, for years. They’ve worked with my grandfather for so long in the car business. I went down to Gainesville with Jerry and I was just amazed by everything. I sponsored Jeffrey during that time and it just went from there. I’m just amazed by everything and I want to learn more. I just think it’s cool.” 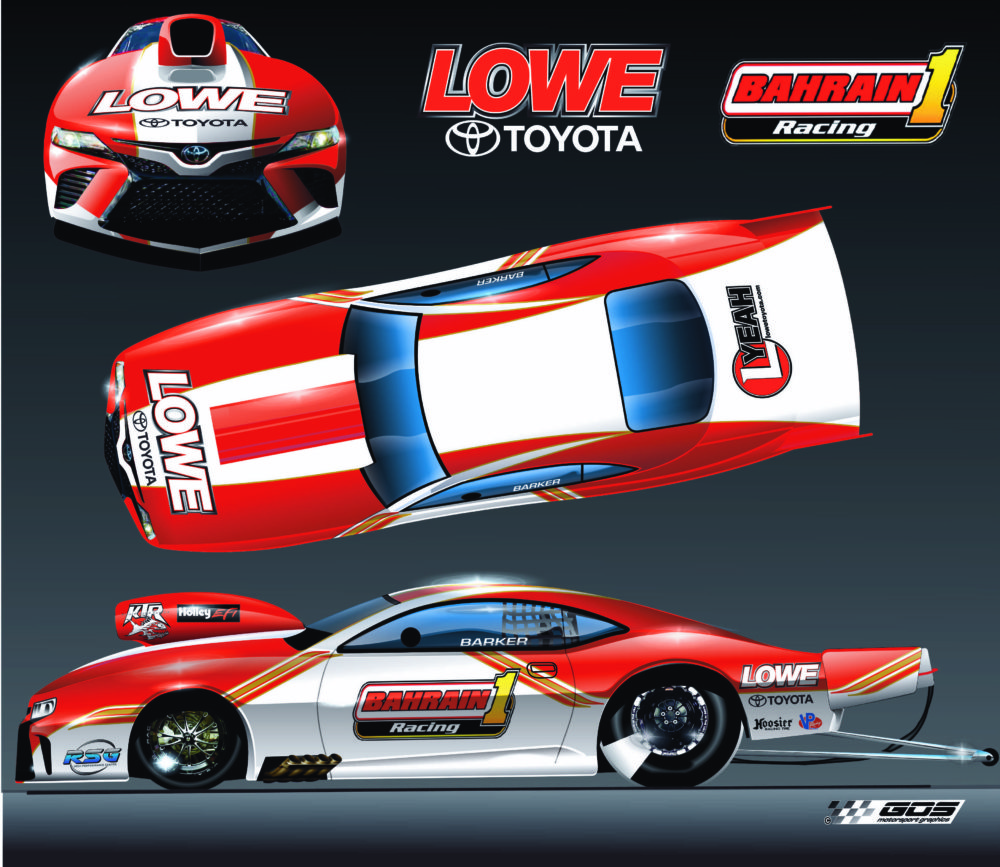 “I really appreciate the opportunity Balooshi’s given me to take this car out and go racing,” Barker said. “NHRA Pro Mod is the cream of the crop in doorslammer racing, and I’m really looking forward to racing with Stevie, Balooshi and the Bahrain 1 team.”

The Georgia native will kick off his season at the traditional NHRA Pro Mod opener, the NHRA Gatornationals in Gainesville, Florida, March 12-14. He tentatively plans on running the full 12-race schedule.

“It depends on how the season goes,” Barker said. “If the season’s not going great, I’m probably not going to leg it out to Denver and Vegas and races like that. But we’ll see how it goes. We’re definitely planning on running the first 7-8 races regardless.”

As for the $50,000-to-win CTech Manufacturing World Doorslammer Nationals presented by JEGS, held at Orlando Speed World Dragway the weekend before the Gatornationals, Barker is trying hard to fit the race into a busy three-race stretch. He’s scheduled to work with Jackson on Marcus Birt’s Radial vs. the World Corvette at Lights Out 12 at South Georgia Motorsports Park the weekend before Orlando.

“I’m definitely going to try to come to that race,” Barker said. “One thing that throws a little curveball in it for me is we have the radial race the week before, then Gainesville the week after. That’s three full weeks of racing and I’m just not sure yet if I can swing all three. I already have obligations to the radial race and obviously Gainesville. I’m definitely shooting towards going.”

Barker will step up to tune the Bahrain 1/Lowe Toyota entry himself this year. He’s proven he’s ready for the challenge, with an incredible track record in the Radial vs. the World realm.

After serving as car chief alongside Jackson on Birt’s Corvette for the last two seasons, he stepped in to tune both Birt and RvW rookie JR Gray at No Mercy 11 last year, as Jackson was tied up with running his own Pro Mod at the NHRA Dallas race the same weekend. Birt and Gray qualified No. 3 and No. 6, respectively, with 3.50-second passes. Birt defeated Gray in the third round, then went on to win the event. Gray won a weekend earlier at Sweet 16 3.0 with Jackson tuning.

“I’ll be taking over calling the shots on the Pro Mod car this year,” Barker said. “It’ll still be ran alongside KTR and Stevie and those guys, but I’ll be in charge of the tuning.”

In addition to Balooshi, Bahrain 1 Racing and Lowe Toyota, will race with support from Holley EFI.