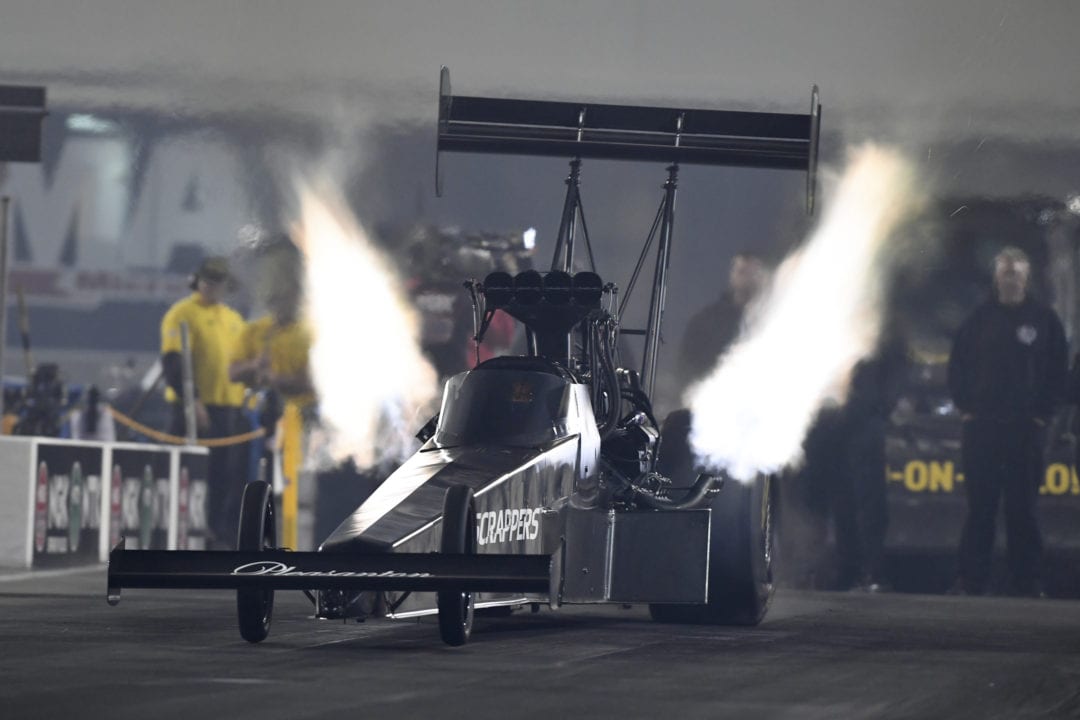 It was another impressive weekend for Top Fuel driver Mike Salinas, who qualified No. 1 and set the track record at zMAX Dragway during the NHRA Four-Wide Nationals.

While the Scrappers Racing team owner didn’t earn his second win of the season on his birthday weekend, his crew members did leave the weekend with new Harley-Davidson motorcycles.

As a reward for helping Salinas to his first career NHRA Top Fuel victory earlier this month in Las Vegas, Salinas rewarded each member of his crew with new Harleys. The announcement and presentation came during pre-race ceremonies on Sunday in Charlotte, and it was something Salinas had planned since the moment he won.

“Each one of my guys gets a brand new one because they all did a great job helping me get my first win,” Salinas said. “I give credit where it’s due and these guys have done some amazing stuff. We’re not going away and this car is going to be good all year long.”

Salinas worked with Harley-Davidson and NHRA on when to surprise his team, and that moment came Sunday. As could be expected, his crew was stunned with the incredible gesture.

“They were ecstatic, but the day I won (in Las Vegas), I knew what I was going to do,” Salinas said. “It was a gesture I wanted to do and they were pretty surprised and pretty happy. But we’re a close-knit group and spend a lot of time together, so this is something I wanted to do.”

It figures to be a huge motivator for Salinas’ talented team, which is led by standout minds like Alan Johnson, Brian Husen and Arron Cave, and they again delivered a strong car for Salinas this weekend in Charlotte.

Salinas bowed out in the second quad of the Four-Wide Nationals, but he remained fourth in points after the sixth of 24 events during the 2019 NHRA season and once again showed the type of performance befitting of a championship contender.

He earned six bonus points during qualifying, setting the tone on Friday with an impressive blast of 3.687 at 327.43 mph to set the track record. That easily held up and Salinas added another strong run of 3.728 at 327.43 on Saturday for the quickest run that day.

Salinas went 3.768 at 324.90 in the first round to advance, though he slowed to a 5.423 a round later when a last-minute lane swap pushed him into the far lane. Still, Salinas likes where he team is at a quarter of the way through the 2019 season.

“We’re positive people and we’re happy to be here,” said Salinas, who now has three career No. 1 qualifiers. “We know we have something. We broke the track record, qualified No. 1, so everything is all good with this team. You’re going to have some good runs and bad runs, but we’ve got a really fast car.”

It won’t take long for Salinas to try for his second win of 2019, as the Scrappers Racing team travels to Atlanta next weekend for the Arby’s NHRA Southern Nationals, May 3-5 at Atlanta Dragway.

Salinas celebrates with his team after earning his first career Top Fuel win earlier this month in Las Vegas. He surprised his team with Harley’s in Charlotte as a token of appreciation.