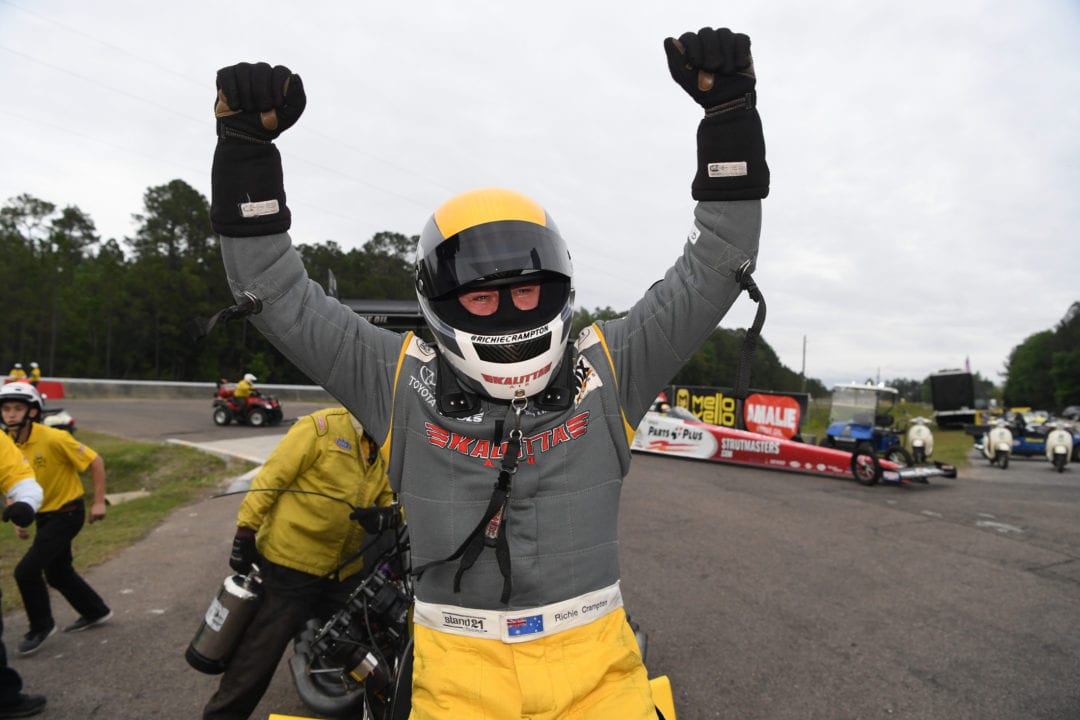 The high moment for Richie Crampton a year ago was winning the early-season NHRA Mello Yello Drag Racing Series event in Gainesville. The Australian Top Fuel standout won there for a second straight year last month, but now Crampton hopes it simply turns into a building block for the rest of the 2019 season.

The Kalitta Motorsports driver will get the chance to build upon his most recent win at this weekend’s 20th annual DENSO Spark Plugs NHRA Four-Wide Nationals at The Strip at Las Vegas Motor Speedway, as Crampton aims to keep his hot streak going in his 10,000-horsepower DHL dragster. It didn’t happen a year ago, as Crampton slumped to an 11th-place finish, but he is confident this season will be much different.

“There’s no question we have a more consistent car this year, and that builds more confidence in me as a driver to work on my reaction times and try to win those close races on the starting line,” Crampton said. “The way Kurt (Elliot) and Connie (Kalitta) have the car running right now, we haven’t set the world on fire in qualifying, but we’ve gone down the track a lot and I know they’re going to build off that. We’ve put those first-round losses from last year behind us and continue to move onward and upward.”

Steve Torrence (Top Fuel), J.R. Todd (Funny Car) and Vincent Nobile (Pro Stock) were last year’s winners of the event that will be televised on FOX Sports 1, including finals coverage starting at 5:30 p.m. (ET) on Sunday, April 7. It is the fourth of 24 races during the 2019 NHRA season and marks the second ever four-wide race in Las Vegas, giving West Coast fans the chance to witness the incredible thrills of four-wide racing.

It also presents one of the biggest challenges in the sport, but Crampton is one of drag racing’s marquee drivers and he’ll look to thrive in the unique set-up after winning the 50th anniversary race in Gainesville in March. A year ago, Crampton only won nine more rounds over the final 21 races, something he is determined to change in 2019. With legendary tuner Kalitta calling the shots and Elliot on board this year, Crampton, who is currently fourth in points, can see a significant difference already.

“We did have a rough end to last season but for me, I knew if I just continued to do my job and have faith in my team and crew chief and my car, the wins would come back and obviously they have,” Crampton said. “I’m just focusing on becoming a dependable driver and I want to earn the right to be driving the car I’m driving. It’s hard to keep your chin up when you have a rough weekend, but you’ve got to.”

Going against elite Top Fuel competition means there is always a possibility for a rough weekend, and Crampton knows he’ll have to be focused to knock off the likes of defending world champ Steve Torrence, Clay Millican, Antron Brown, Terry McMillen, teammate Doug Kalitta, Brittany Force and Leah Pritchett in Vegas. But Crampton has nine wins in 11 Top Fuel final rounds, proving he knows how to rise to the occasion. With a historic Gainesville win under his belt, he’ll now try for his first four-wide victory.

“There’s not too many easy rounds,” Crampton said. “It just goes to show you how Top Fuel is this year. Every driver competing in Top Fuel is the cream of the crop and every round win is getting harder and harder to come by. But I have such a great team behind me and they put me in a great position to win.”