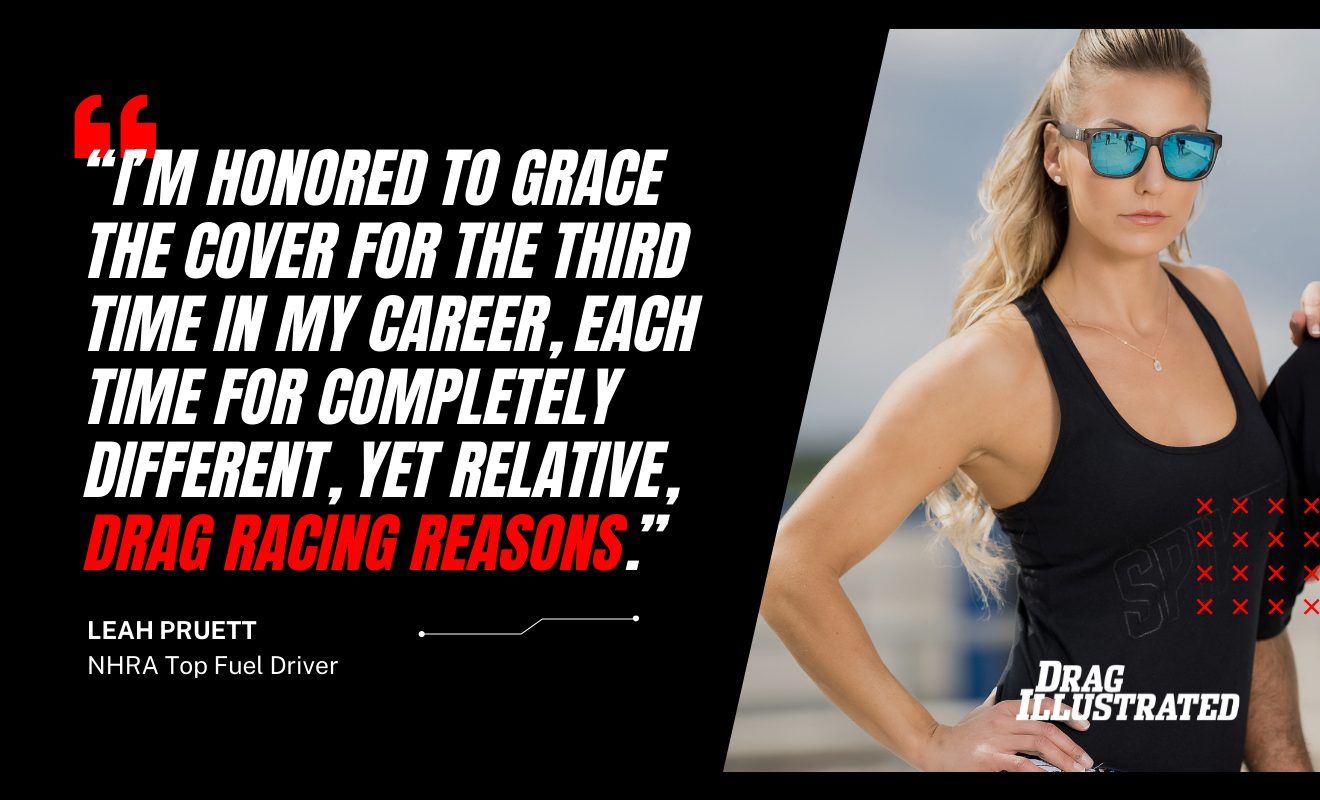 Leah Pruett’s drag racing career has taken a number of unique and thrilling turns and DRAG ILLUSTRATED has there been to document all of it, showcasing the fan-favorite driver on the cover at various points in her remarkable career.

The latest — and third DRAG ILLUSTRATED cover — for Pruett comes in the latest issue, No. 169 for the magazine, as Top Fuel standout Pruett appears on the cover with her fiancé, legendary multi-time NASCAR world champ Tony Stewart, putting two of motorsports biggest names front and center for DRAG ILLUSTRATED’s annual “State of Drag” issue.

The moment wasn’t lost on Pruett, a self-built and self-driven star, who was thrilled to share the cover with her fiancé and tell a story that was far different from her first two cover stories in 2011 and 2016.

“I’m honored to grace the cover of DRAG ILLUSTRATED for the third time in my career, each time for completely different, yet relative, drag racing reasons,” Pruett said. “From my debut in Pro Mod in 2011, to my first Top Fuel win in 2016, and now alongside my better half as we discuss with DI what life is like in love, licensing, and all things motorsports in between.”

Pruett first appeared on the cover a decade ago in the middle of her Pro Mod career while racing in Top Fuel was merely a dream.

Five years later, Pruett celebrated her first nitro milestone and appeared on the second cover. In the next five years, Pruett accomplished a great deal more, winning seven more races and even claiming a world championship in Factory Stock Showdown.

He star continued to grow even brighter in that span, becoming one of the most recognizable and popular faces in drag racing. But in the terrific cover story from DRAG ILLUSTRATED Editor-in-Chief Nate Van Wagnen, Pruett showed a completely different side, touching on her relationship with Stewart, how it came to be and coaching him on getting behind the wheel of a Top Fuel dragster in what was both a sincere and forthright conversation for both figures.

“(DRAG ILLUSTRATED) always has their finger on the drag racing pulse, and even when a pulse is somewhat different from the traditional drag racing rhythm, they stand out and cover that as well,” Pruett said. “I like that the DI cover stories are not always about the recent winner or milestone breaker, rather DI takes a unique approach by giving clarity to pit chatter and beyond.”

“Our goal has never been to just report the news,” he began. “We serve our mission to grow and build the sport of drag racing by celebrating the men and women who spend their lives at the drag strip. We tell their stories, we explore pressing issues and while we certainly love to celebrate a racer’s success – our content isn’t steered solely by who’s winning right now. I’d say that’s rooted to some extent in our team’s collective racing experience. We know how hard it is to win and be successful in this sport, and if we focus only on the men and women who are winning in this moment or season we’d absolutely be missing out on many of the most interesting, inspiring and relatable stories that exist in drag racing.

“We were thrilled at the opportunity to once again work with Leah, and the inclusion of Tony Stewart as well was just a perfect storm-type deal,” Buck concluded. “Their story is one worth telling, and the insight, opinion and candid commentary they offer in the interview is worth its weight in gold. We certainly didn’t gloss over the opportunity to leverage Tony’s incredible fan following and influence in motorsports to massively increase the eyes on this issue and in turn all the many other awesome racers, events and cars featured throughout the pages of the issue.”