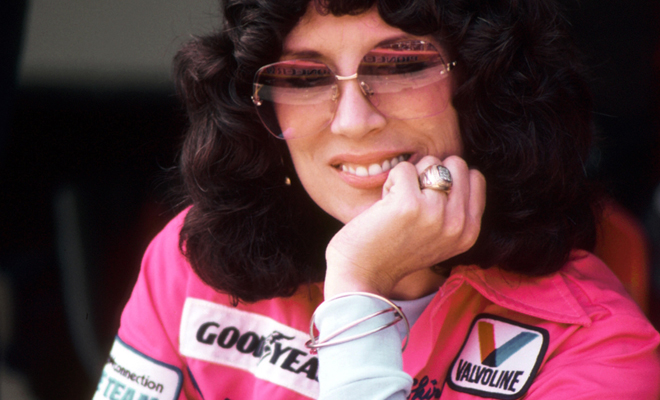 In order for 100 professional wins by a female driver in the NHRA to be possible there had to be a first. Of course, that honor and distinction of course goes to the legendary Shirley Muldowney, who started the impressive streak with her first career victory in Top Fuel on June 13, 1976 in Columbus.

That magical number certainly grabbed Muldowney’s attention and she discussed the importance and significance of the landmark achievement.

“I think it’s a terrific thing,” Muldowney said. “A lot of ladies played a big part in getting to 100 wins and it’s good for the sport. Anything that shows women can be competitive with men and come out on top, it’s a good thing. There are a lot of cars capable of getting that 100th win.”

All eyes at Royal Purple Raceway will be on the likes of Houston area native Erica Enders-Stevens in Pro Stock, Alexis DeJoria and Courtney Force in Funny Car, and Brittany Force and Leah Pritchett in Top Fuel, as the 100th win will be within reach at Houston.

Bob Vandergriff (Top Fuel), Cruz Pedregon (Funny Car) and Jason Line (Pro Stock) are last year’s winners at one of the circuit’s quickest and fastest tracks. The event, the sixth of 24 during the 2014 NHRA Mello Yello Drag Racing Series season, will once again be televised on ESPN2.

But it all started with Muldowney, who overcame adversity and doubters to blaze a path for females in the sport. The pioneer won her first NHRA race in 1976, starting a historic run that included a number of significant moments.

“Nobody could hold me back from what I wanted to do,” Muldowney said. “When the NHRA saw that I was capable in the driver’s seat they relaxed and were great. They were very accepting. They knew I could sell tickets and that I had the goods.”

There was no denying that as fans, media members and fellow competitors marveled over her driving ability and fiery personality. Muldowney finished with 18 career Top Fuel victories, including a memorable performance and win at the prestigious U.S. Nationals in 1982. That remains one of her career highlights, as does her championship in 1980.

“In 1980, we slayed them,” Muldowney said. “We came out of the box at Pomona with a brand new car that I had never even driven before and we won. I was really proud of that.”

Muldowney’s place in the sport as a pioneer and Hall of Fame driver is certainly secure, but the impact she has had remains impressive. The current crop of female drivers have all remarked on how Muldowney has paved the way for their own successes, and she remains to be blown away from the constant support she has received for more than 40 years.

“Some of the most wonderful things people said to me or said about me just because I drove that race car is really special and unbelievable,” Muldowney said. “It was my life and it means a great deal to me. That tells me I made a difference, had an impact, helped the sport and did something good. It’s amazing to see how I am treated all because of that race car and I can’t say enough how much I appreciate it. I love the sport and I think drag racing the most exciting motorsport around. There’s nothing like it.”

Muldowney will be attentively watching the race weekend in Houston with the possibility of the landmark 100th victory by a female driver taking place at Royal Purple Raceway.

She also praised the current lineup of female competitors, which includes Pro Stock points leader Enders-Stevens, DeJoria, who posted her first two career victories to start off 2014 in strong fashion, and the Force sisters who have won the Auto Club Road to the Future Award (Rookie of the Year) in consecutive years.

“I think today’s crop is very good,” Muldowney said. “Erica is as good as anybody and is good as I’ve ever seen. She does an incredible job and you don’t see many mistakes from her, and the job all of them are doing is great.”