Drag racing star Morgan Lucas made a recent visit to Nellis Air Force Base in Las Vegas for the ride of a lifetime. 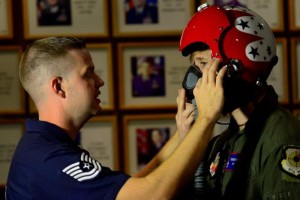 “Aside from knowing you’ll be flying around in a fighter jet, you really have no idea what to expect when you get there,” Lucas said. “Right away I could see how professional and first-class all these men and women are. We were met by Maj. Darrick Lee, who is No. 12 with the Thunderbirds and also its public affairs officer. He took us on a tour of the facility at Nellis and it’s pretty impressive. Everything is perfect.

“They take you through a safety briefing where you learn everything from how to breathe and bear down in your posture to keep from passing out during the high-G maneuvers to how to properly eject in the rocket-powered seats should something go wrong. 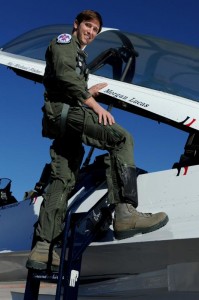 “I met the pilot that was taking me up, Maj. Michael Fisher, and he explained all the things we’d be doing. Man, your heart is pounding just talking about it. Then I got suited up by Tech. Sgt. Craig Hall, who is actually from the same area of Missouri where my mom and dad have their ranch. He follows racing and was pumped to be suiting up a race car driver. Those suits are pretty wild. It’s really labor-intensive getting ready for a flight. The Thunderbirds are top athletes, I promise you.”

The “Ambassadors in Blue” Thunderbird show is a popular one for spectators to watch around the country, but very few get the chance to suit up and ride shotgun in the famous fighter jets. Joining the elite 9G club, Lucas was able to receive a greater appreciation for those who do this to protect our country.

“Going up for the flight is really awesome,” Lucas said. “They have all these practiced procedures and moves they do and it’s like clockwork. Then before you know it you’re airborne. I was thinking I’d be somewhat familiar with G forces as we experience 4.5Gs during a run, but that’s nothing compared to pulling 9Gs through a long turn. 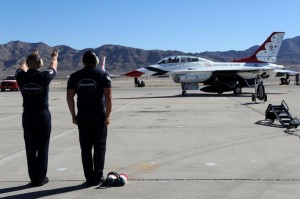 “When Maj. Fisher was so calm going through all these moves I was thinking how incredibly exceptional these men and women are. To handle all what the plane is doing and then carry out a mission at the same time is so mind-boggling. What would it be like to be in a firefight? Just crazy.”

In addition to his dream-making fighter jet journey, Lucas was able to be a part of a special occasion afterward.

“This happened to be Maj. Fisher’s last flight,” Lucas said. “He is moving to the Air Force Reserves, so the entire Thunderbirds crew plus his entire family were there to meet us afterward. We toasted with champagne. It was an honor to be a part of that by itself.”

With a sense of pride, Lucas knows that this experience means more than just a thrill-seeking ride in the sky. It displays what it truly means to be an American and responding to the call to serve.

“I’ve never been more proud to be an American,” Lucas said. “I’ve never had more respect for anyone I’ve ever met. This was an experience of a lifetime, and it makes me feel so blessed to know there are men and women like this protecting us.

“If I were starting my career, the Air Force would be a top candidate. Why would anyone want to even join another branch of the military? This is the ultimate. These are special people, and I’m talking everyone involved, not just the pilots. It’s truly a team deal, just like racing. If they took 30-year-old washed-up Top Fuel drivers, I’d join today.”