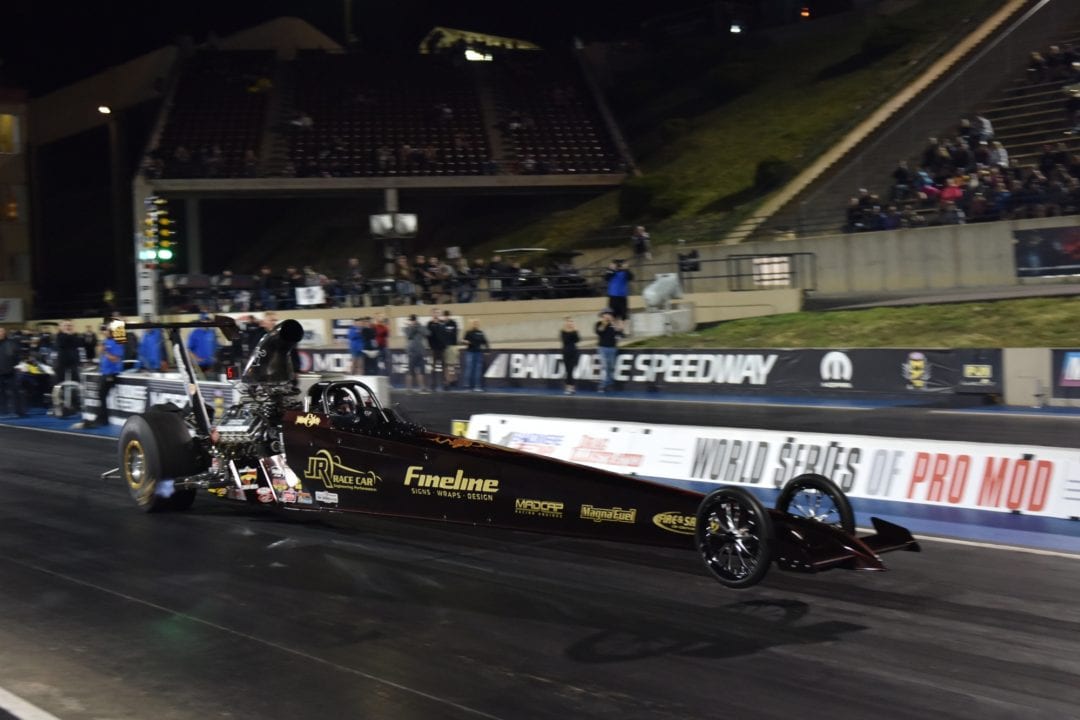 Top Dragster standout Steve Johnson hasn’t retired from racing, but he did want to take this year off when it came to driving.

That is, except for one race.

Johnson will compete in the $5,000-to-win MagnaFuel Pro Star 16 for Top Dragster as part of the DRAG ILLUSTRATED World Series of Pro Mod, which takes place Aug. 10-11 at Bandimere Speedway.

The reason is simple.

“This event is way too bad ass to miss,” Johnson said.

That, and a bit of redemption, was more than enough to get Johnson, the Vice President and General Manager at Fineline Graphics, excited to get back behind the wheel for one race in 2018.

He was the runner-up in Top Dragster at the inaugural event on Thunder Mountain, losing in the final round after an unfortunate parts failure.

Johnson, a Denver-area native, is anxious to finish the job in 2018, while also putting on a show in front of family and friends in the process.

His dragster is typically in the 6.30s during competition, but Johnson has big plans for the WSOPM, all of which centers on turning on the third stage of nitrous in the dragster.

“I’m going to turn it up for the World Series of Pro Mod,” said Johnson, a former NHRA Divisional champion in the class. “I’ve never turned on the third stage (of nitrous). I’m going to turn it on and hopefully run in the 6.10s for the first time or low 6.20s. This is our opportunity to play and see if this thing can go faster.”

It will be a thrill to watch, and Top Dragster and Top Sportsman’s inclusion in the WSOPM represents a major part of the weekend.

While the Pro Mod class deservedly gets the spotlight in the biggest and richest Pro Mod race in the history of the known universe – and the winner earning $100,000 – Top Dragster and Top Sportsman play an imperative role in the thrilling race.

Like Pro Mod’s rapid ascent in popularity in the last handful of years, Top Dragster and Top Sportsman are thriving as well. Johnson, who races in the Quick 16 program at Bandimere Speedway, has been impressed with the growing interest in the class, and he believes the rise in popularity and participation is similar to what is fueling Pro Mod’s growth.

“There’s just so much diversity in the class,” Johnson said. “You’ve got guys in old alcohol dragsters with big blowers on them, then you’ve got guys running a pro charger. We’ve done it in nitrous and there’s a couple twin-turbo cars out there, too. There’s a lot of diversity and it’s really thrived here in Denver. The class has been good to us.”

Including the class and also making sure Johnson was there was a no-brainer for Drag Illustrated Founder and Editorial Director Wes Buck.

Having both classes compete in the inaugural event proved to be a major highlight a year ago, and Buck has seen that momentum continue for 2018, especially with $5,000 on the line for both winners.

“Not to overstate this, but Top Sportsman and Top Dragster are two of the most critically important categories in drag racing as it relates to the health of the sport,” Buck said. “These cars are filling the pits of dragstrips coast to coat and to hear Steve say this is the one race that couldn’t be missed, it just warms my heart. To hear guys say it’s the highlight of their season, it’s just amazing to me.”

Johnson has been around the sport all his life, so he knows what makes a top-flight event.

He liked the close-knit, high-stakes feel of the inaugural WSOPM, giving it a unique atmosphere that made the event special. Being close to the Denver racing scene, Johnson expects that to grow in 2018 and has noticed an even bigger buzz this year. Of course, that’s only added to his motivation to grab the Top Dragster win on Thunder Mountain.

“We burned up our motor in the final, so it’s time for redemption,” Johnson said. “I’m probably not ready to quit driving, but this year, I wanted to take the year off driving and see how it goes. But I didn’t want to miss this. It’s the only thing I wanted to do.”