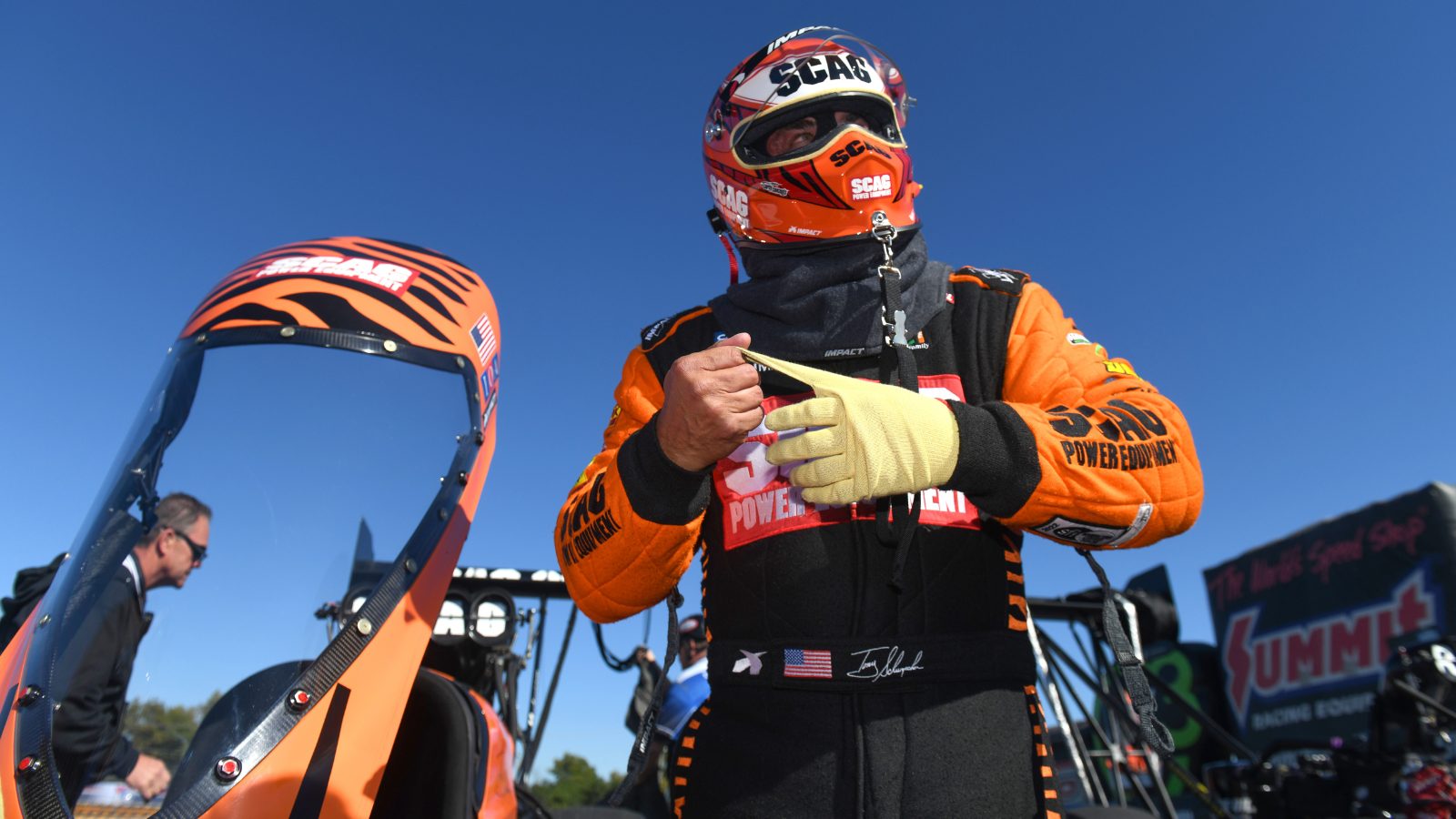 After a frustrating start to his 2022 NHRA Countdown campaign, SCAG Power Equipment Top Fuel driver Tony Schumacher was optimistic that the Maynard Family Racing team would experience an uptick in performance beginning with this weekend’s NHRA Midwest Nationals. Following last week’s Charlotte event, Schumacher had remarked that he thought the team would crack into the 3.6-second zone for the first time this season during the St. Louis race. Schumacher noted that the JCM tuning brain trust of Todd Okuhara, Phil Shuler, and Marc Denner was pleased to see that their 11,000-horsepower machine was starting to react to what they were asking it to do, and felt they had a good baseline to work off of heading into World Wide Technology Raceway.

“We haven’t run in the 3.60-range all year. And, I think this weekend in St. Louis, it’ll run that 60 we’ve been waiting for,” Schumacher had said in between the Charlotte and St. Louis events, adding, “The car’s performance is finally doing what we’re asking it to do. When you have a car that does that, you can fine-tune the run. Every time we were making a change, the car would just do the same thing; it wouldn’t react. Now we’re making changes, and it’s responding to what we’re doing, sometimes good, sometimes bad. Even if it’s bad, at least you can say, ‘okay, that’s not it, we need to take a different approach,’ but at least you have that information to be able to make that call.” 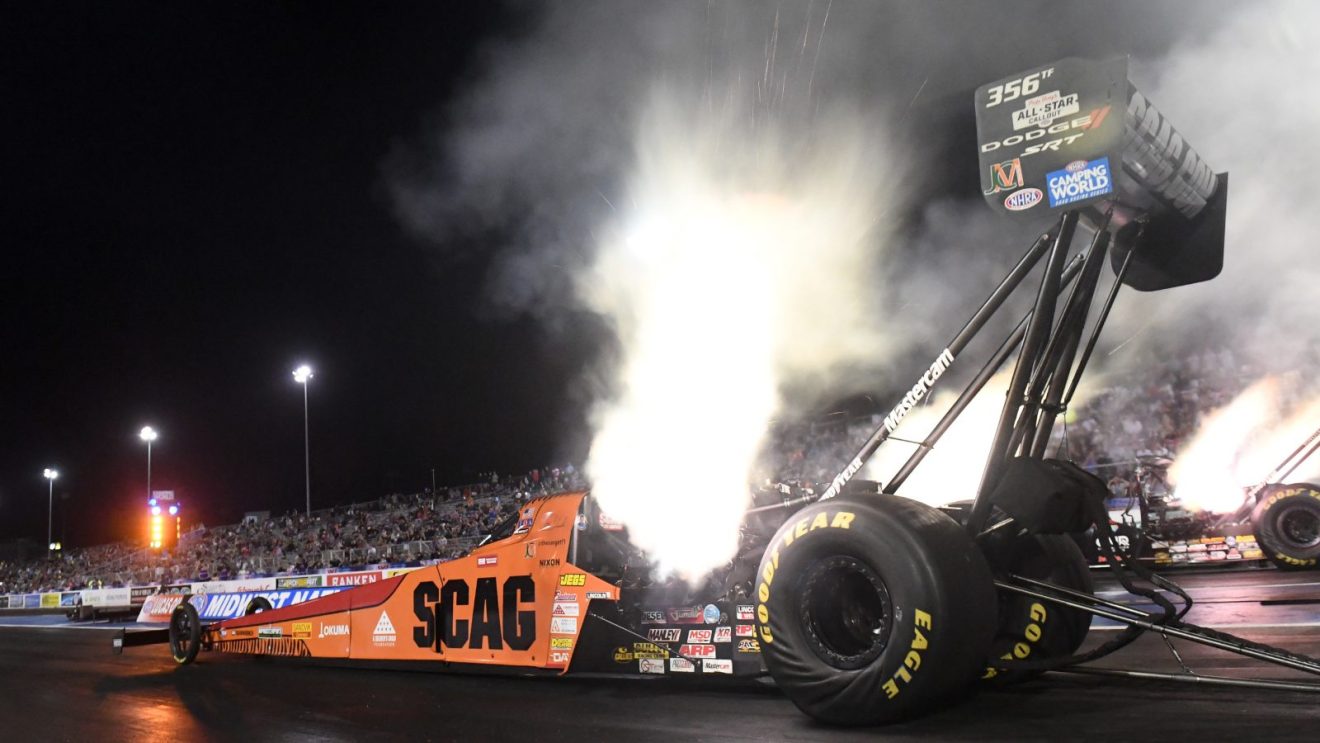 During the third round of qualifying in St. Louis, Schumacher took his DSR Performance-powered machine to the finish line stripe in 3.694 seconds, clocking his best run of the season and first sub-3.7-second run, as he had predicted earlier in the week. The Q3 pass placed Schumacher sixth on the Midwest Nationals elimination ladder and set up a first-round contest with Leah Pruett. The former teammates were the second pair of drivers to hit the track on Sunday morning and were nearly even leaving the starting line. Schumacher started to steadily pull ahead and scored the round win with his 3.701 E.T. versus her 3.716-second effort. In the quarterfinals against Shawn Langdon, Schumacher lost traction as soon as he hit the throttle, and his opponent made a clean pass to advance into the semifinals.

While Schumacher had hoped to have a longer race day of going rounds, he continues to be pleased with the direction the team is headed.

“We have a car that is performing and starting to come around,” Schumacher said on Sunday afternoon. “Not a very good second round today, but a number of things caused that. In reality, our car is doing what we’re asking it to do, and we’re looking forward to really getting this momentum going.”

After a grueling three-race stretch that saw NHRA teams visit Reading, Pa., Charlotte, and St. Louis, Schumacher and the SCAG Power Equipment Top Fuel team will have a week off from racing before the Camping World Series season resumes with the Texas NHRA FallNationals near Dallas, Oct. 14-16.

“Very much looking forward to a week off and getting back home to recharge,” said Schumacher, who occupies the No. 12 spot on the Top Fuel leaderboard following the Midwest Nationals. “Phil, Todd, and Marc learned so much this week that it’ll be great for them to go back and regroup, and come out swinging in Dallas, which is going to be a massively big race for SCAG. We’ve got tons of distributors coming down, and owners and employees of local dealerships. Dallas is where I won my first race, and we’re all pumped to get back there following what will be a much-needed off-weekend.”