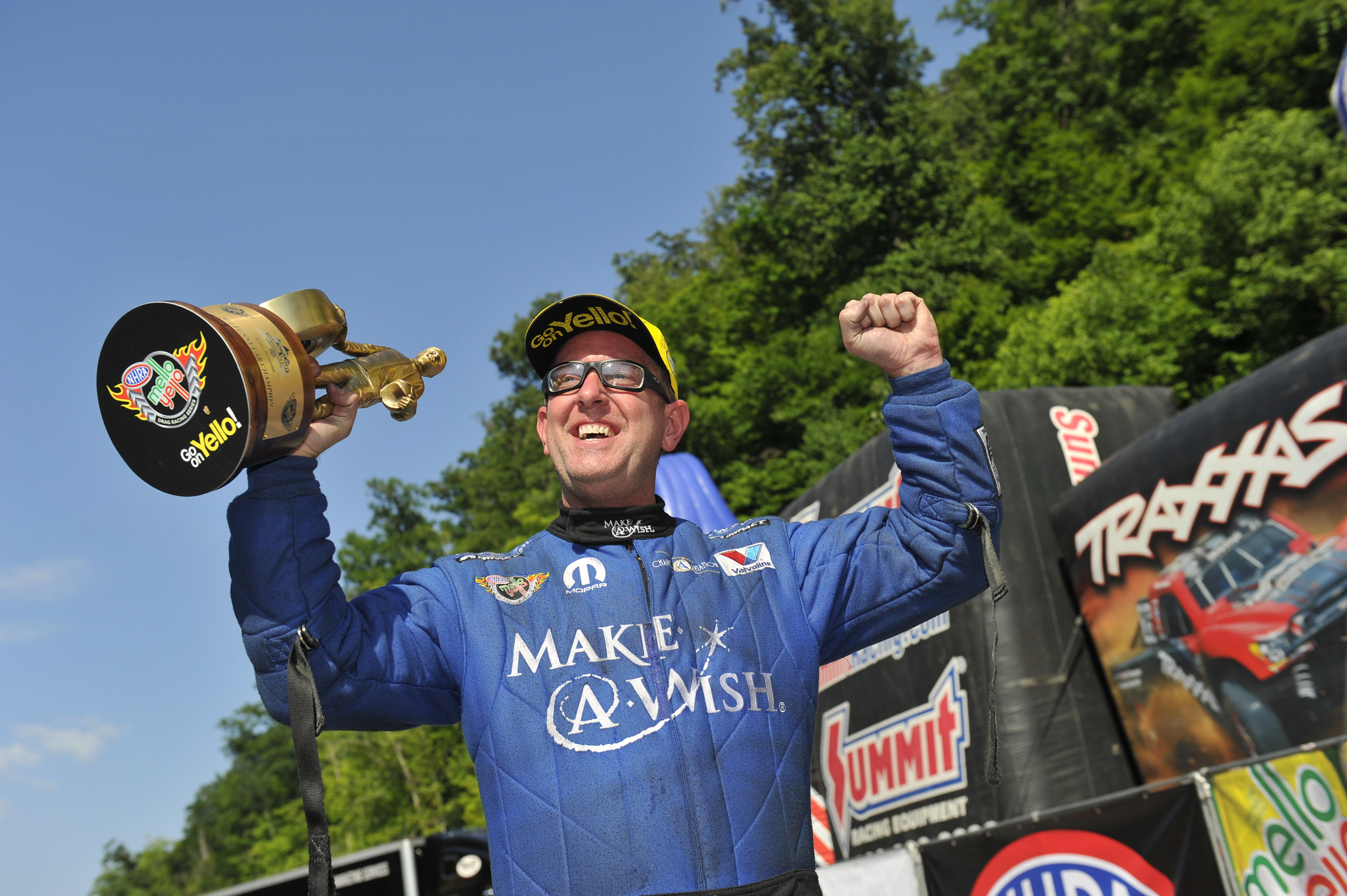 Tommy Johnson Jr. Lights up the Tires in Thunder Valley

Tommy Johnson Jr. and the Don Schumacher Racing Make-A-Wish Funny Car team made a very important point on Sunday in Bristol: They are by no means to be taken lightly. Johnson and his Terry Chandler-sponsored team put a series of former world champs on the trailer on raceday at the NHRA Thunder Valley Nationals with their very reliable John Collins-tuned Funny Car and surely made a lot of wishes come true as they earned their first win together as a team. For Johnson, it was particularly special as the win fell on Father’s Day. Twice before TJ has won on Father’s Day, and he was able to do it again with his father, veteran drag racer Tommy Johnson Sr., in attendance. “I woke up this morning thinking, well it’s Father’s Day, and I seem to do pretty good on Father’s Day,” said Johnson, who also won on this special day in Columbus in 1988 and then again in Englishtown in 2007. The Englishtown win, notably, was also Johnson’s most recent victory. He returned to racing full-time this year after being off the full-time circuit since the conclusion of the 2008 season. “Our Make-A-Wish Dodge Charger was just a really good car all weekend,” said Johnson. “The guys did a great job, and I felt good coming into today. Knowing that it was Father’s Day did give me some confidence, and as a driver, that’s always a good thing. I thought, well I’ve done this before – why not again?” The win was the 10th of Johnson’s career in a nitro category and it also marked the 226th win for the Don Schumacher Racing organization. In addition, it was the first Funny Car victory of the season for DSR. “It’s not that we haven’t been competitive, we just haven’t been able to put it all together on Sunday,” said Johnson, who had raced to the semifinals twice this season but had yet to make the final round. “We’ve qualified great but just couldn’t get it to go right on raceday. I’m thrilled we were able to get it done today. I didn’t want to get to the final and get a runner-up and still not have a DSR Funny Car win. I wanted to prove that we’re not in a slump, it’s just tough out here. We just needed to step it up a little bit.” And step it up they did. Johnson missed one qualifying session due to weather and another due to a simple mistake that prevented them from making the final qualifying pass; however, the two runs he did make during qualifying were exceptional. One was the quickest of the session and the other was second quickest, allowing Johnson valuable bonus points and situating him in the No. 5 qualifying position heading into raceday. On Sunday, Johnson and his Make-A-Wish Dodge got the better of Cruz Pedregon in the first round, 4.147 to 4.613, and then blasted past a troubled Robert Hight in round two for a 4.175 to 6.00 win. Unfortunately for DSR, that made for a TJ versus teammate Matt Hagan semifinal. Both DSR cars were tuned right up, but it was Johnson with the win light this go ’round, 4.201, 299.46 to Hagan’s 4.207, 293.54. The victory set up a final-round meeting with Tim Wilkerson in which a 4.156, 302.14 defeated his opponent’s 4.423, 227.34, and the Make-A-Wish team’s hunger was finally satiated. They got their win. The win was the first for new crew chief Collins, who joined the team just a few races into the 2014 season. Collins had been the assistant crew chief on the Ron Capps-piloted NAPA Dodge Charger since 2010. “I’m very proud for John to get that first win as a crew chief. We grew up together and are from the same hometown, so this is really neat,” said Johnson, who moved into the No. 3 position in the Funny Car standings with the victory. “He’s slowly making this car his own, and he’s doing a great job. The first car he ever worked on was my Top Fuel dragster in 1999. To see him work his way up in the ranks of racing as a crew member, assistant crew chief, and now a crew chief and to get his first win is pretty cool. He did the bottom end on my dragster the first time he ever went to a race and worked on a car. And now he turned the screw before I staged in the final. That’s a pretty neat deal. “The car was working perfect today. It was running great, and the guys did a great job. They turned that thing around every lap, and man they have put in so many extra hours lately at the shop – I’m just thrilled that the work paid off. “Our car has been right there for awhile now, and maybe it’s the heat and coming into the hot conditions of the summer that played into our hands. I’m looking forward to the next three months.”