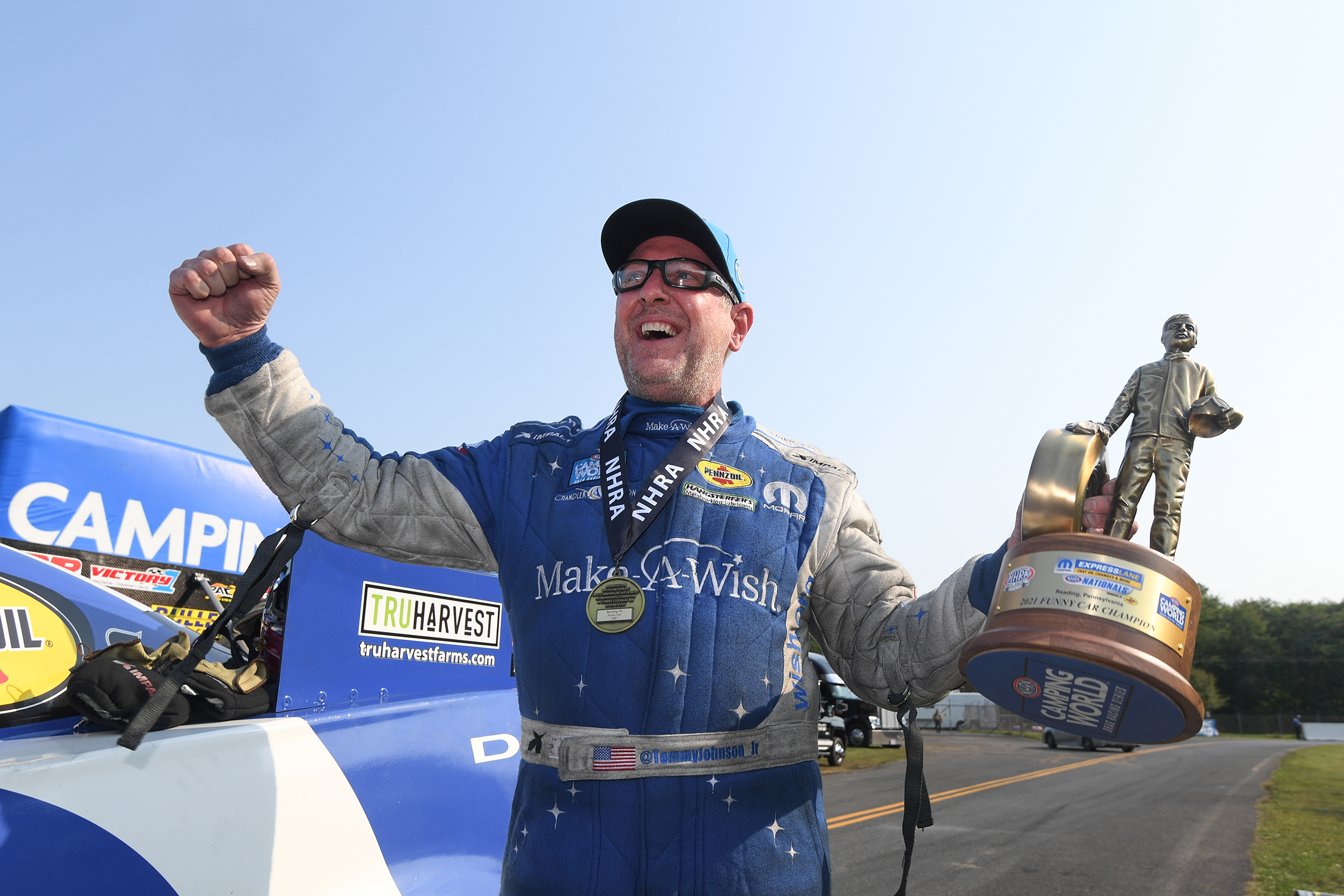 ‘Unprecedented’ has been the name of the game for most things COVID-related, and NHRA Drag Racing is no exception. Under the most unusual circumstances, Tommy Johnson Jr. won the Mopar Express Lane NHRA Nationals Presented by Pennzoil, collecting Wally trophy No. 23 while competing on behalf of Matt Hagan who now sits in the No. 2 position on the Funny Car leaderboard thanks in part to Johnson and his efforts behind the wheel of Mopar Dodge Charger SRT Hellcat.

After testing positive for COVID-19 ahead of the Dodge//SRT NHRA U.S. Nationals, Hagan withdrew from the Indianapolis event and former Don Schumacher Racing Funny Car pilot Tommy Johnson Jr. was called upon to substitute for Hagan in his absence. Hagan’s entry was ranked No. 1 heading into the Indy race, the final ‘regular season’ event before the points were reset for the Countdown to the Championship, and Johnson was focused on helping Hagan and the Mopar team, the defending Funny Car series champions, maintain their top-seeded ranking. In an unfortunate series of events, Johnson and the team failed to qualify for the U.S. Nationals when a mechanical malfunction forced Johnson to abort his first qualifying attempt following his burnout, and Mother Nature washed out Saturday’s two additional sessions, causing Hagan to fall all the way from first to fifth in the point standings heading into the start of the Countdown to the Championship.

When Johnson was tasked with the Mopar Dodge Funny Car driving responsibilities for the Reading, Penn. event, the first of seven Countdown playoff races, he and the team were eager to redeem themselves. They wasted no time returning to championship-form, unloading with a 3.895-second run at 333.82 mph on Friday night, which held up to be the second-quickest pass of the session and was also recorded as a career-best speed for Johnson, who started race day from the No. 4 position.

Johnson and the Dickie Venables-led Mopar Dodge Funny Car team dominated the field on Sunday, putting together a string of quick and consistent runs, which included two 3.8-second E.T.s to defeat Jim Campbell and Ron Capps, a 3.902 E.T. to take down J.R. Todd in the semifinals, and a stout 3.926-second at 330.23 mph pass to outrun John Force’s 3.946-second pass in the final round. Johnson’s triumph, which was victory No. 364 for drag racing’s winningest team, propelled Hagan from fifth to second in the point standings and within one round win of Force, the current point leader.

“It’s pretty amazing actually,” said Johnson, who finished second in the standings to Hagan in 2020. “I got a call a week ago after I’ve been sitting on the sidelines for 10 months, saying ‘we need you.’ To come back and up your game that good, I mean, Dickie and the guys have been racing all season while I haven’t been doing anything. I thank them for the opportunity. I thank Don Schumacher, and Matt, I hope you get to feeling better. Dickie and all these Mopar guys, they came, they rose to the challenge and dove in and made me fit in this car and made everything happen.

“After Q1, I thought we had a pretty good chance to win this race,” he added. “It’s hard to sit out that long. These cars accelerate so fast and you want to keep up and keep ahead of the car and be able to drive them good. Each run, it just got more and more comfortable, and as the day went on I kept getting more relaxed and more relaxed. By the final round I was like, ‘oh, okay, there’s nothing to it now.’ I was astonished when I threw the parachutes (in the finals) and saw the win light come on. I just burst out laughing because I couldn’t believe it happened. I thought, ‘you’ve gotta be kidding.’ We’ve come a long way in a week.”

Victories are always sweet, but Sunday’s win at Maple Grove Raceway was extra special for Johnson. Not only was he able to find his way back to the winner’s circle after being away from the driver’s seat since October 2020, but Johnson dedicated the win to his father, the late Tommy Johnson Sr., who passed earlier this year. After his win, Johnson reflected on memories he shared with his father at the Reading, Penn. facility, which is also where Johnson captured his career-first Funny Car win in 1999. 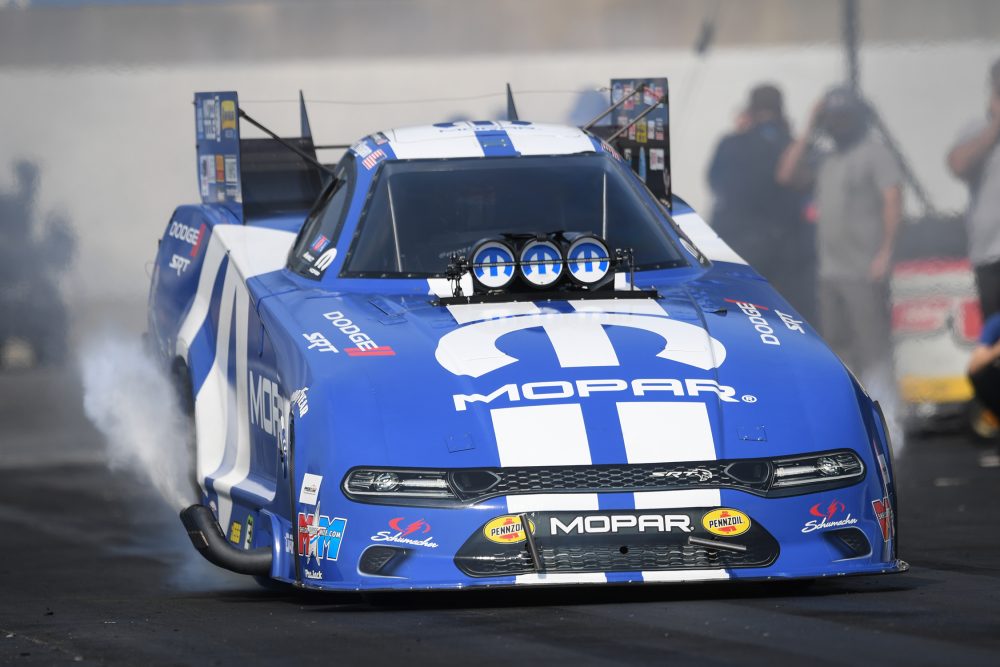 “This has always been a special track for me,” said Johnson. “I won my first Funny Car race here. I don’t want this to be the last one. I want to get another shot at it again. It was very cool and it meant a lot. I kept thinking of my dad all day. He and I had our own Top Fuel team for a few years and came out here and raced a few years together with a lot of memories. I’ve been talking about them with my wife all weekend; joking about my dad yelling at me for scratching the truck driving in here with all the trees. The sport of drag racing is my whole life. I’ve got all my memories from drag racing.”

Hagan, of course, was paying close attention throughout the weekend, tuning in on FS1 and NHRA.tv, watching to see how the event and points would play out, and had nothing but praise for Johnson and the team.

“I am so proud of my guys,” said Hagan, who is eagerly awaiting clearance to return to competition. “They got it done today. T.J. did a phenomenal job in the race car. He’s a wheelman. We battled each other the last two years and there wasn’t a doubt in my mind that he could get it done. Everybody adapted to adversity and the driver change and I’m just so proud of what these guys accomplished today. We weren’t able to race in Indy and it was a setback, but that just goes to show, you can dig right back. These guys did great. There’s a huge hole in my heart not being there with them racing and it was really tough to watch, but at the end of the day, I knew these guys were going to do a great job and they did. They won today and I’m so proud of each and every one of them. Dickie Venables is just an amazing guy, an amazing leader, and a great crew chief, and does what it takes to get it done. That’s why we’ve won so many championships together and done so well. I can’t say thank you enough to T.J. for stepping in and bringing his A-game.”