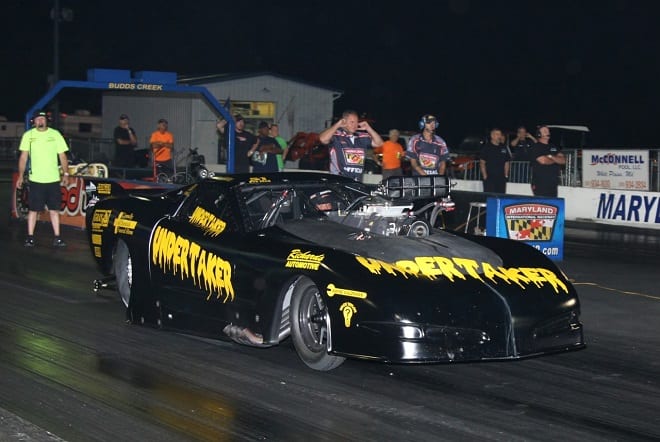 On a picture-perfect night at Maryland International Raceway (MDIR), Baltimore-based Tommy Gray and his ’05 supercharged Corvette stood tall as the “Last Man Standing”, topping a strong field of 10 Pro Mods to take home the $4,000 payday as well as the additional $500 bonus provided courtesy of Best Western Plus of La Plata, Maryland at the track’s War on Wheels III mid-week feature.

The event featured a “unique” no qualifying or ladders format where racers draw from a deck of cards for their pairing and lane assignments for eliminations following an earlier shakedown pass. The show attracted a pre-commitment list of 12 competitors, however the 3-6 PM open test session offered to all Pro Mod racers prior to the event provided an early casualty with West Virginia’s Dwayne Wolfe suffering engine issues and un-able to make the first round call. Robert Patrick Jr. was also on the property with his ’15 GTO, however, Patrick chose to use the evening for some testing on the quarter-mile looking to sort of his combination for up-coming ’15 events.

“What a tremendous show the Pro Mod racers put on for our fans last night,” says MDIR Director of Marketing and Public Relations Director Rick Lindner. “It is a very special commitment these racers make to come and support the track for these type of events. We are thankful and honored with the opportunity to host these quality race cars, drivers, crews, and fans.” 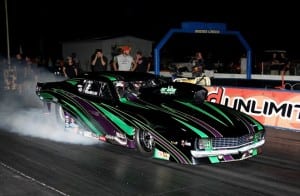 The racers took no time in hooking up with the track in the first round of eliminations with each of the five winning passes reaching the sub-4 second elapsed time. Perhaps the most competitive pair of the first round was New York’s George Williams III and his immaculate ’68 nitrous Camaro putting down a winning 3.860 lap to a losing 3.927 effort by Bill Edward’s ’05 ProCharged Grand Am. In the other first round pairings, Tommy Gray, Tommy Franklin, Jay Cox, and Kenny Ferguson all came out victorious.

Five cars returned for the second-round call with Cox drawing the lucky bye and automatically advancing to the semi-final round. Gray eclipsed Ferguson while Franklin put Williams III on the trailer for the evening.

Again, with an odd pair advancing to the semis, this time it was Gray drawing the bye and a pass to the finals. Franklin used a 3.738 lap to advance to the finals to face Gray, while the semifinal round proved to be a costly one for Cox. As soon as Cox’s car launched from the starting line, a break in the camshaft caused a severe explosion and fireball from the orange nitrous-infused Camaro. While the engine damage was significant, thankfully Cox was able to walk away from the explosion with minor scrapes and bruises from the blast. 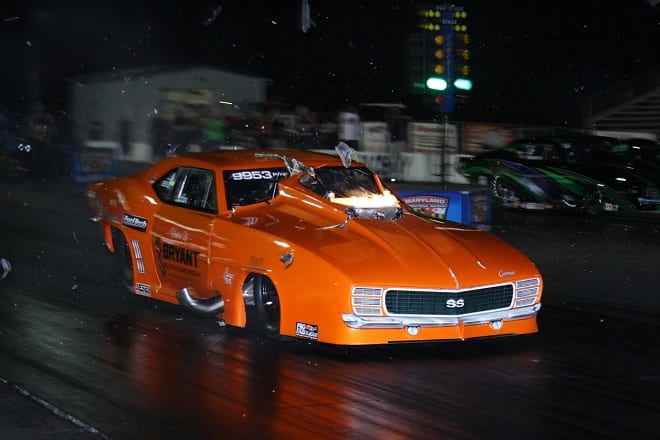 “Thank you to all the racers and fans for coming out for our Wednesday War on Wheels program. We are proud of this signature series and pleased with the large turnout on all fronts last night,” says MDIR Vice President and General Manager Jason Miller. “We look forward to moving this series forward in ’16 and will continue to build on the current success into future seasons. Thank you everyone for your amazing support of MDIR!”