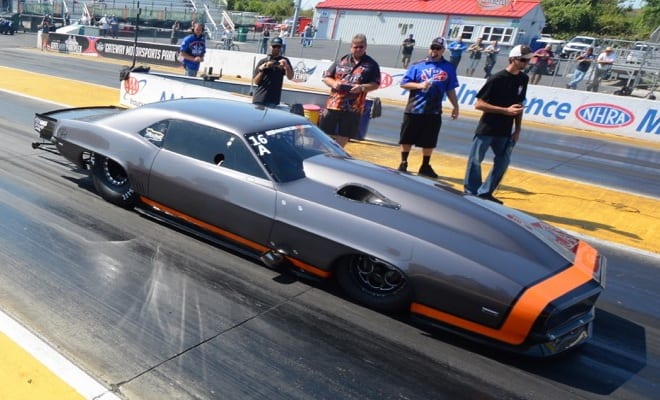 Tom Bailey made a simple post on Facebook looking to buy or borrow a set of wheels—wheels that would fit “Sick Seconds 2.0,” his slick Hot Rod Drag Week, Unlimited Class-winning ’69 Camaro. He was inquiring just in case he decided to mount a set of 315 drag radials for an upcoming race at Memphis. 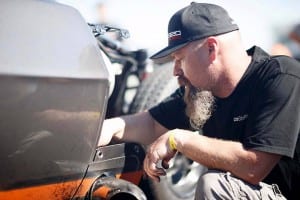 “It’s still too cold in Michigan to test or race, so we were going to hit the PDRA season opener at Tulsa Raceway Park until it was pushed back a week due to a very ominous weather forecast,” Bailey said. “Memphis is closer to home and giving the radial tire deal a try sounded like fun.”

So with a borrowed set of wheels and Mickey Thompsons, Bailey and crew are headed south Mar. 17-19, to see what they can accomplish on a small tire at the Outlaw Street Car Reunion.

According to Bailey, the twin-turbocharged, 615 c.i. Steve Morris powerplant is the same “mule motor” that has not been out of the car or apart since the grueling 1,000-plus miles Drag Week road trip ended last September. Aside from bolting on radials, making a converter change, rear suspension adjustments and adding 250 pounds of weight needed to meet Radial vs. the World class rules, he said no major changes will be made to the car. 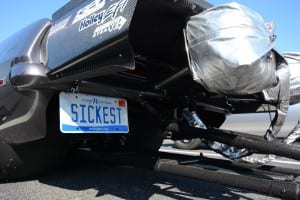 The Camaro has been as quick as a 3.97 in the eighth mile on the slicks—though never having made a full start-to-finish pass without some pedaling required. Not a complete stranger to drag radials, Bailey knows he has his work cut out for him to harness a few thousand horsepower to the tiny by comparison footprint of the radial tires. While having a good time in Memphis is his primary expectation, Bailey said running low four-second passes would be a bonus. The plan is to take full advantage of the test day on Thursday before the race, and hope his team can get the car close in short order.

Since completing and winning the Unlimited class in Drag Week with a 6.17 at 219.63 average, Bailey’s “Sick Seconds 2.0” has been on the track only once to test some different stator and converter combinations. Public appearances have been the name of the game, with stops at SEMA, PRI, and the famed Detroit Autoroma where the Camaro picked up a second-place trophy, as well as a best-engineered award.

When asked what he thought about the potential of lining up against Justin “Big Chief” Shearer and his “Crow Mod” Firebird for ultimate “street car” bragging rights, Bailey answered with a simple “maybe.” Regardless, he said the car will arrive at Memphis International Raceway in full street trim, “so if nothing else, we can shuttle people back and forth from the track to the hotel with it.”