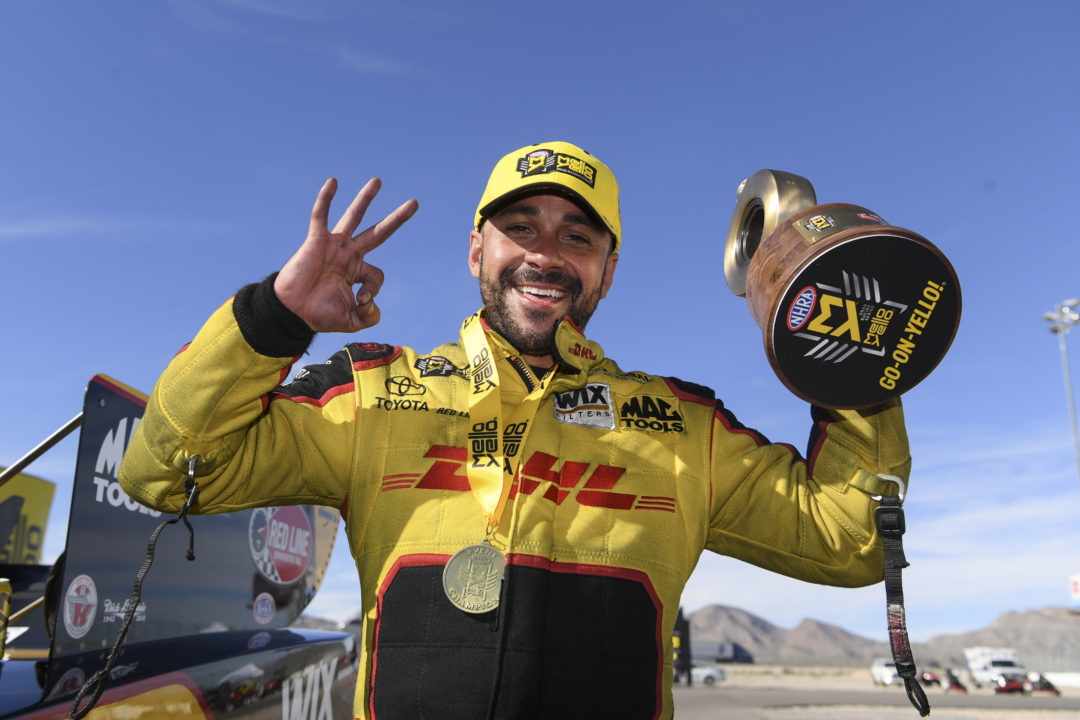 Make it three in a row for J.R. Todd at Las Vegas.

The reigning Funny Car world champion drove his DHL Toyota Camry to victory at the DENSO Spark Plugs NHRA Four-Wide Nationals at Las Vegas Motor Speedway with his pass of 3.970 seconds at 319.07 mph. He has won three consecutive events at the Las Vegas track.

“It’s all Kalitta Motorsports,” Todd said. “It seems like ever since I’ve come on board with this team, we’ve always run well here. This whole team, all four cars, have a really good handle on this place, especially Todd Smith and Jon (Oberhofer, crew chiefs). It seems like the more we come here the better grip they get ahold of this place.”

In Pro Stock, Butner picked up his third win of the 2019 season with his Jim Butner’s Auto Chevy Camaro team with his 6.677 pass at 206.67. The 2017 world champ got the final win light of the day with his triple holeshot victory over the quad of Matt Hartford, Jason Line and Greg Anderson. Hartford was second to the stripe and finished as the runner-up.

Butner’s Sunday win is his first four-wide win and his second win at the Strip at Las Vegas Motor Speedway.

“I learned that you can’t be a lazy winner,” Butner stated. “The win light is off now and it’s time for the next race. We’ve got to work hard but I’m with the best team. I’m in the final with Greg and Jason, we’re like three brothers. It’s just great to get that with Ken (Black, team owner). It worked out to be a good day and just very blessed and can’t complain.”

Arana Jr. picked up the win on his Lucas Oil EBR amongst a quadrant of champions consisting of reigning champ Matt Smith, five-time champion Andrew Hines and four-time champion Eddie Krawiec. M. Smith came in second as Hines broke on the starting line and Krawiec fouled out with his red light start.

“That Lucas Oil motorcycle, she’s bad to the bone,” Arana Jr. said. “That’s just a testament to my team and the consistency. We weren’t the fastest but we were consistent all weekend. I worked on my lights and they got better and better and I stepped it up when I needed to step it up in the final because the final was stacked. I love going up against those guys. It makes me put out my best. It’s just something about racing those guys that you just dig deep and really go for it.”

The NHRA circuit will travel to Houston to the Mopar Express Lane NHRA SpringNationals Presented By Pennzoil April 12-14 for the fifth race of the 2019 season. 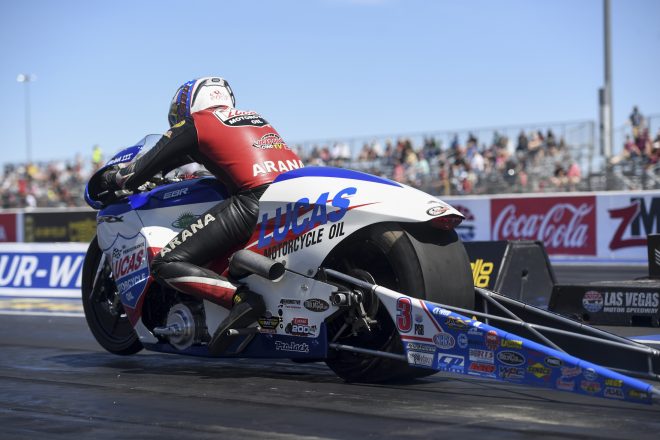