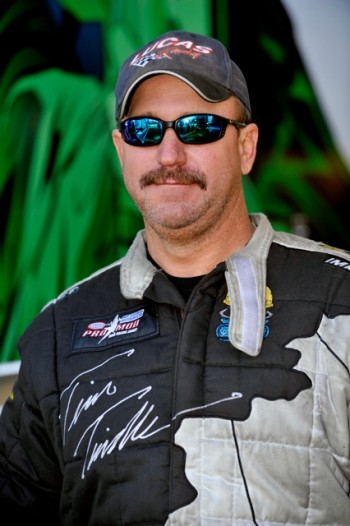 Tim Tindle (left), who joined Danny Rowe Racing as the driver of the team’s second Agave Underground Tequila Pro Mod Camaro in early July, is recuperating at Methodist Hospital in Indianapolis following a scary high-speed crash Sep. 1, during the opening round of eliminations for the 59th annual Chevrolet Performance NHRA U.S. Nationals.

Facing opponent Troy Coughlin in the first round of eliminations, Tindle’s Camaro went out of control near the midway point of the quarter-mile track and impacted the guard wall. Briefly airborne, the car flipped and rolled several times before coming to a rest upright in the grass alongside the outside of the retaining wall.

The NHRA Safety Safari was on the scene immediately and assisted as Tindle exited the car under his own power. He was taken to the on-site paramedic center and then transported by ambulance to Methodist Hospital in Indianapolis.

Team owner and fellow driver Danny Rowe reported Tuesday morning that while Tindle is being held at Methodist Hospital for continued observation, he is doing well and expected to make a full recovery. “Tim is still experiencing some pain and soreness from the accident, but the doctors report no major injuries,” said Rowe. “He is here with his wife Sonya and son TJ, and despite feeling pretty beat up has been in good spirits.”

Rowe continued, “We have to take our hats off to Tim McAmis, our chassis builder, and all the safety manufacturers who provide us with equipment that does exactly what it is supposed to do in worst-case scenarios such as this. Personally, I can’t say enough as to the job that all the safety equipment did in keeping Tim safe. We are all very thankful that he’s going to be fine and back racing with us again soon.

“The outpouring of support from the drag racing community has been amazing and I know all the phone calls and text messages have meant a lot to the Tindle Family. We may be fierce competitors on race day, but when the time comes this group of people – especially all our fellow Pro Mod teams – is one big family.”

Danny Rowe Racing will continue to provide updates as to Tindle’s condition and expected release from the hospital in Indianapolis. To keep up with the latest news and results from Danny Rowe Racing, log onto www.dannyroweracing.com