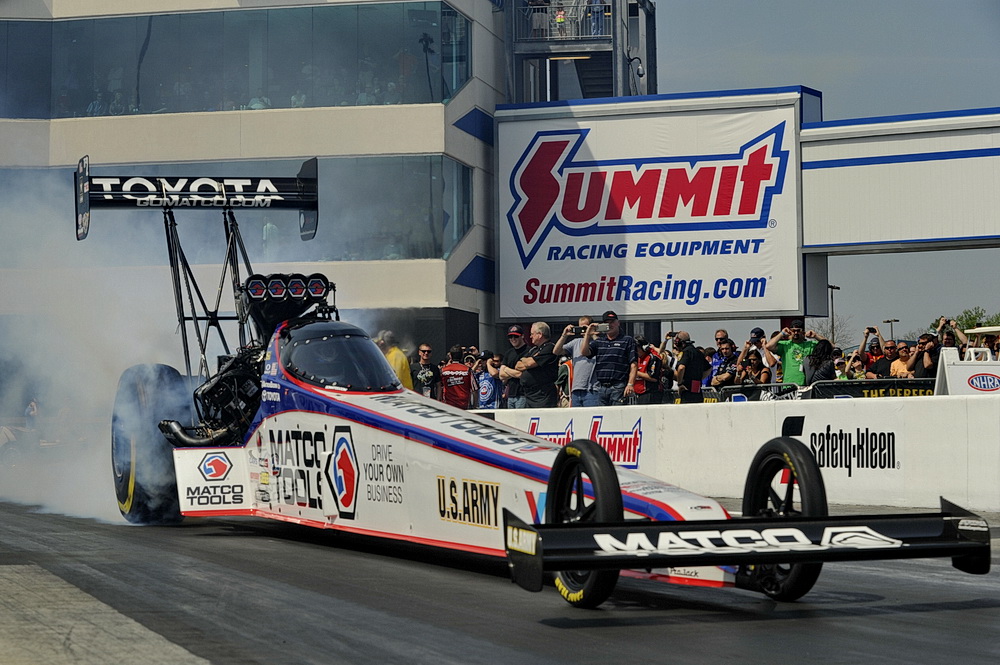 It’s always a special time when Antron Brown returns to his home track in New Jersey for the NHRA Summernationals in the Mello Yello Drag Racing Series.

It was where he grew up on weekends while his father, Albert Brown, and uncle, Andre Brown, would race at Old Bridge Township Raceway Park in Englishtown, N.J.

That alone makes the stop on the 24-race series one he circles each year, but this weekend marks even more reasons to enjoy a special trip home.

Brown, 39, will arrive as the Mello Yello Top Fuel points leader as one of only two drivers through eight events to win two national event titles. The next one will mark a milestone as it will be the 50th time he has left a race with an NHRA Wally trophy since turning pro in 1998 in the Pro Stock Motorcycle category. 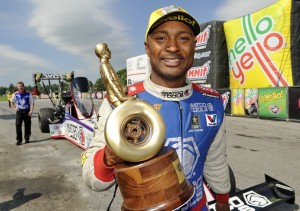 “There wouldn’t be a better place for me to get my 50th Wally than at Englishtown. That’s where it all started for me. I remember riding my dirt bike there and watching my dad and uncle race at Englishtown and playing under the grandstands. There are so many great memories there.

“I’ve been so blessed to be with our Matco Tools/U.S. Army team. All my family will be out at Englishtown and sharing that with them would be more than I could ask.

“But our team has to treat it like any other race. We’ll just put our Matco tools to use, keep our heads down and go from A to B.”

While Brown’s father and uncle will compete in the NHRA Sportsman competition at the Summernationals, his 21-year-old cousin, D’Andre Redfern, is a crew member with Terry McMillen’s Top Fuel team.

“Grandpop Alby was the first Brown to go down a dragstrip and he was pretty darn good at it,” said the 2012 Top Fuel world champion and first African-American to win a major American automobile championship. “He started the Brown drag-racing gene with support from my grandma (Dolores) who comes to a lot of our races.

“Grandpop never got to see me race or meet my wife Billie Jo and our three. He went to heaven when I was 6. That’s 33 years ago but I think about him a lot and remember all the stories I’ve been told about him. He was a smart man, a good man, a family man and always there to help people.

“I wish I had more memories but my dad and uncle and grandmom have told me so many stories. So many people are responsible for who I am today and being able to live my dream of being a professional drag racer, but my roots in racing go back to one man I wish I could have gotten to know better.

“Everyone in my life has contributed in some way for me to be able to own 49 NHRA Wally trophies and the 2012 Mello Yello Top Fuel championship.

Brown’s grandparents worked at General Motors in New Jersey when they lived on one paycheck and saved the other until they had enough to buy a house and 10 acres in 1953 in Chesterfield, N.J., and three years later he started Albert S. Brown & Sons Septic Services.

The 58-year-old business continues today as one of the longest running African-American businesses in the area.

“A lot of my peers always wonder why I work so hard in drag racing. Well, as much as I love our family septic business I don’t want to be No. 1 in the ‘No. 2’ business,” Brown joked. “I just want to be No. 1 on the racetrack.”