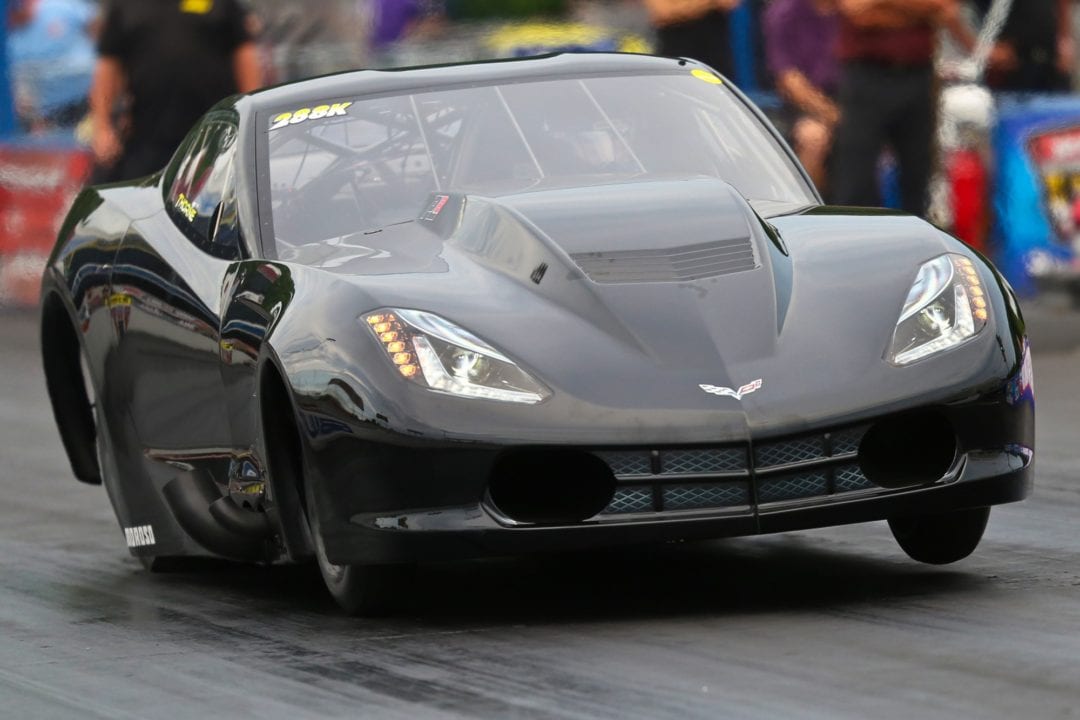 Racing at the Professional Drag Racers Association (PDRA) North-South Shootout presented by Line-X at Maryland International Raceway, Moroso Pro Boost rookie Kris Thorne fired off a 3.707-second pass at 216.55 in his turbocharged ‘17 Corvette to finish Friday qualifying as the No. 1 qualifier for the second consecutive race.

A high car count, frequent oildowns and rapidly approaching thunderstorms led PDRA officials to postpone the third qualifying session, which was also to include the rain-delayed pro class final rounds from the PDRA Mid-Atlantic Showdown at Virginia Motorsports Park.

“We’re thankful to have so many cars to run down the track, but we ran into a lot of unexpected downtime and couldn’t run everything as scheduled,” said Tyler Crossnoe, race director, PDRA. “We’re just going to have to go hard tomorrow, pray for the best and hopefully everything goes smooth so we can get this event wrapped up.”

In the Jr. Dragster classes, Joshua Talvacchio ran a perfect 7.900-second pass to hold the No. 1 spot in Coolshirt Pro Jr. Dragster presented by Knoxtown Products. With a .005 reaction time, Ryan Harris grabbed the provisional No. 1 position in Gilbert Motorsports Top Jr. Dragster.

Florida native Kris Thorne continued his strong debut season in Pro Boost with his 3.707 at 216.55, a pass that stood as the quickest of the day after 19 Pro Boost entries attempted runs down the Maryland eighth-mile strip.

“I’m very impressed with the way we’re running,” Thorne said. “We’re finally starting to get a handle on this thing. We’re struggling a little bit, but all around we’re doing pretty well with it. We have Proline Racing Engines on board – they kind of make everything fall into place.” 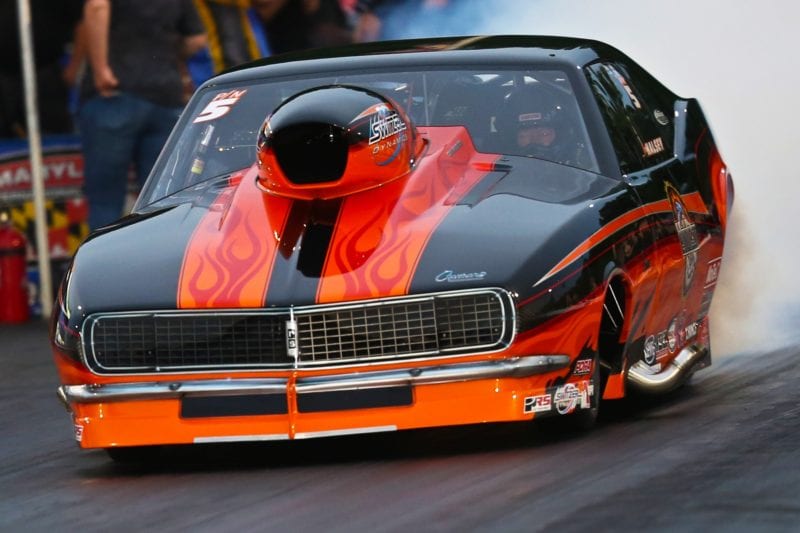 Maryland’s own Jim Halsey was the talk of the track after Thursday testing, as he recorded a blistering 3.65 in his Fulton-powered ’68 Camaro. Halsey and his Brandon Switzer-led team carried over that level of performance into qualifying, delivering a 3.686 at 205.60 to end the day. He’ll square off against two-time Pro Nitrous world champion Tommy Franklin in the Mid-Atlantic Showdown final round during Q3. 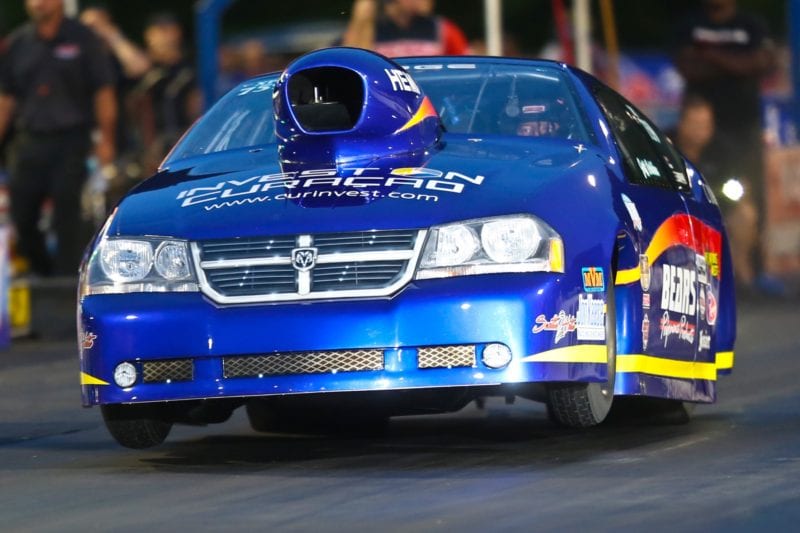 Extreme Pro Stock veteran Jeff Dobbins entered the North-South Shootout with the chance to win two events, as he was set to face Tommy Lee in the final round from the Mid-Atlantic Showdown during Q3. He prepared by running a 4.064 at 177.51 in his Bear’s Performance ’14 Dodge Avenger in the second session.

“We felt like that was a pretty good lick,” Dobbins said. “We struggled a little bit earlier today when the track was hot. We actually caught a break when, unfortunately, Dave Hughes crashed in front of us (Hughes was uninjured). (PDRA) went out and dragged the track again and we were able to get back in the (clutch) can, made a little adjustment and that probably had a lot to do with it. I think that run would’ve been hard to outrun and I’m sure it will stick for tomorrow.”

Lee, who was filling in for John Montecalvo in Montecalvo’s ’18 Camaro at the Mid-Atlantic Showdown, might sit out the final round. While he would forfeit the event win to Dobbins, he would give Montecalvo one final chance to qualify for the eight-car North-South Shootout field. Montecalvo is the only driver outside the field, aside from Hughes.

East Coast Nationals runner-up Todd Hoerner qualified No. 2 with a 4.08 at 178.24 in the Zarella family’s Sonny’s-powered ’12 Camaro. Johnny Pluchino, son of 2016 Extreme Pro Stock world champion John Pluchino, recorded a 4.09 at 177.63 in the Kaase-powered Strutmasters.com ’13 Mustang to hold the No. 3 spot in his Extreme Pro Stock debut. 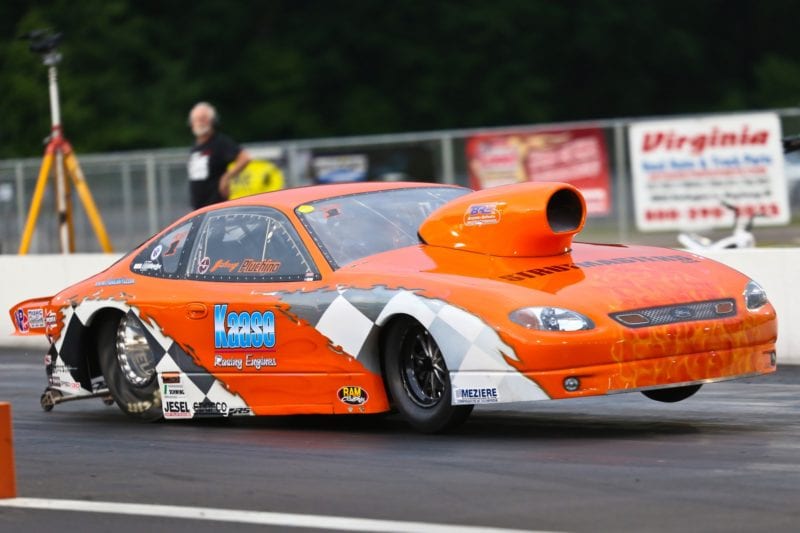 Pluchino, the points leader, didn’t let the unexpected opportunity distract him from success in Pro Outlaw 632. He unleashed a 4.215 at 167.97 in the naturally aspirated Escort to defeat Mike Oldham in the Mid-Atlantic Showdown semifinal and to qualify No. 1 going into Q3 – and the Virginia final round against Tony Gillig, who defeated Jordan Ensslin on the other side of the ladder.

“We’re really confident in the 632 program right now,” Pluchino said. “We’ve been fast, but we’ve turned the consistency up a notch. The challenge has been going back and forth from the Pro Stock car to the 632 car. The shifting patterns are a little different, doing the burnout is a little different. Every little thing is similar but a little different. We’ve managed to do well so far, but these are two difficult cars to drive. We’re really happy with the performance of them. I just have to stay tuned in.” 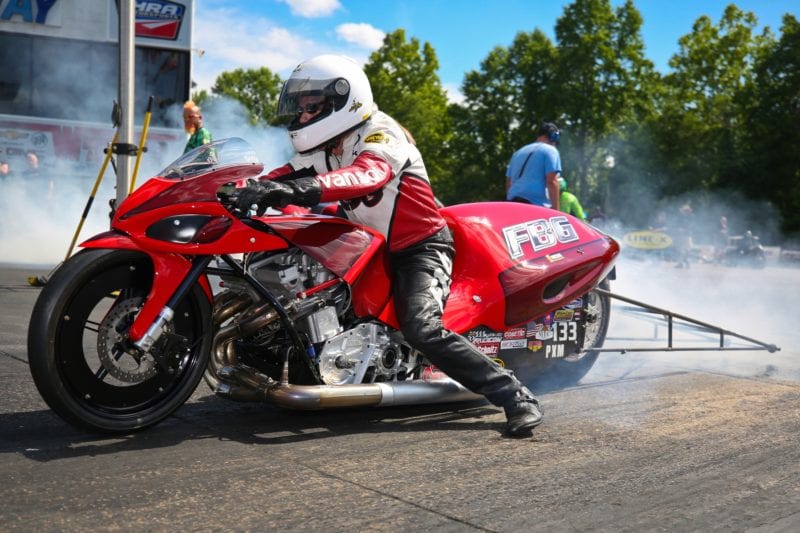 Longtime drag bike rider and mechanical guru Paul Gast shot to the top of the qualifying order in Pro Nitrous Motorcycle when he rode his Fast By Gast ’16 Suzuki to a 3.987 at 178.83 during the night session.

Defending world champion Ronnie “Pro Mod” Smith qualified No. 2 with a 4.005 at 175.34 on his Innovative Performance ’16 Hayabusa. Past world champion Travis Davis rode his Davis Racing entry to a 4.021 at 175.75 to round out the top three. 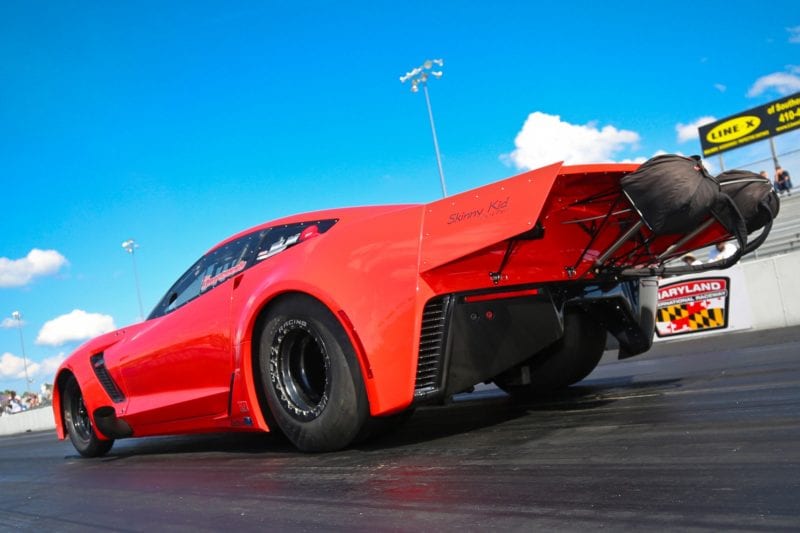 The North-South Shootout is the second of three PDRA races for the wild and unpredictable Outlaw 10.5 class in the Atomizer Racing Injectors Outlaw 10.5 National Championship Series. Connecticut’s Ken Quartuccio finished a tricky day of qualifying in the provisional No. 1 spot with a 4.078 at 198.85 in his turbocharged “Serial Killer” ’17 Corvette. Maryland native Tim Essick took his self-built “Brown Sugar” ’18 Mustang to the No. 2 spot with a 4.181 at 183.59. Chris Cadotto in his supercharged Dodge Ram qualified third with a 4.283 at 179.88.

Continuing the trend of consistent top performers in the PDRA’s sportsman classes, Brian Bednar piloted his supercharged Spitzer dragster to the provisional Elite Top Dragster top spot with a 3.722 at 196.13. Camrie Caruso in the supercharged “Lola” Nelson dragster qualified No. 2 after running a 3.831 at 192.85. Kathy Fisher rounds out the top three with a 3.873 at 184.47 in the ProCharger-boosted “Dragoness” American dragster.

The PDRA North-South Shootout presented by Line-X Protective Coatings will continue Saturday at 9:30 a.m. beginning with the final qualifying session for professional competitors. The original Saturday schedule, starting with sportsman final qualifying, will go into effect after the completion of pro qualifying.