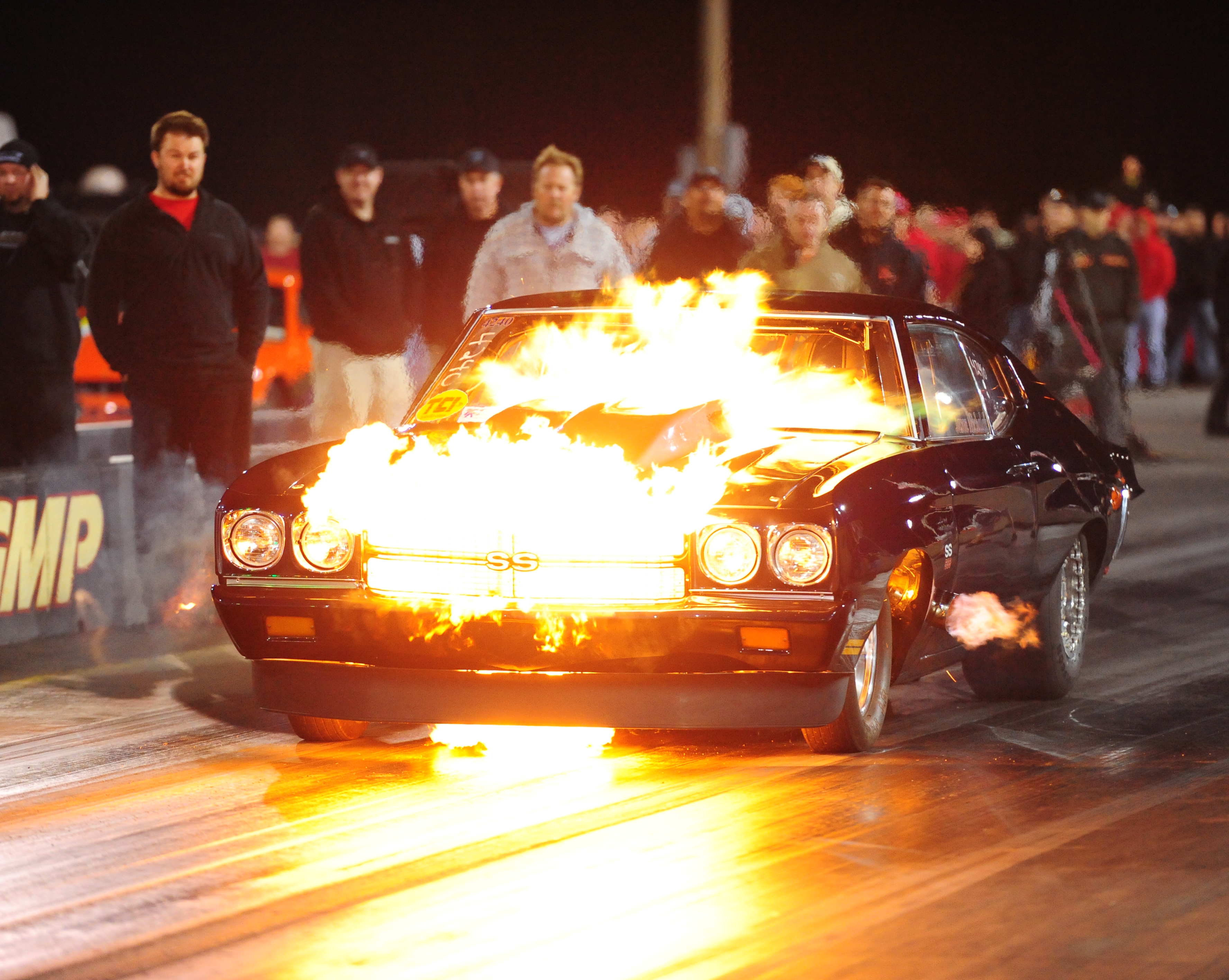 The action came fast and furious Feb. 24-26, at promoter Donald “Duck” Long’s The Night the Lights Went Out in Georgia, Radial Rumble III at South Georgia Motorsports Park (SGMP), but it was Mother Nature who won the final round as persistent rain showers on race day negated literally months of anticipation, trash talk and late-night wrenching.

Long made the call to send everyone home shortly before 4:30 p.m., but said all classes would be paid in full, with the total purse divided equally among all entrants remaining in contention. For instance, the 32-car Radials vs. the World field didn’t get to make even one elimination pass, so the $26,000 total purse was divided by 32, giving each qualifier $812.50 to take home.

“It sucks; what more can you say?” Long asked rhetorically. “We thought we were going to get the track dried after it stopped raining at 3, but when it started again about an hour later it became obvious we just weren’t going to be able to get it done.”

Long said prior to announcing the decision he conducted a quick poll in the pits that revealed unanimous agreement among competitors to call it a day.

“Nobody wanted to go home early without racing, but everyone agreed they didn’t want to try and wait it out, especially since we were facing a 10 o’clock curfew anyway,” he said.

With 271 entries listed among the seven official Lights Out III classes and dozens of index and bracket racers also in attendance, it was by far Long’s biggest spring race ever.

“I really hated to see this because we had a record car count for the February race (he promotes a similar event in October at SGMP), record spectator attendance and tons of records and personal bests out on the track. This was an awesome event and I hate that it ended with rain, but what can you do?”

Racers also contended with challenging conditions Friday, especially during round one of qualifying, as gusty winds reaching nearly 40 mph blew straight down the track from the starting line. Saturday’s action saw the best weather of the weekend with warm and dry, but overcast skies. It also attracted a huge spectator turnout that filled the grandstands along both sides of the all-concrete SGMP strip.

As mentioned, fans and racers alike were rewarded with several new records set during three rounds of qualifying and the first round of eliminations for six classes completed before the wet stuff took over. Chief among the new records was the 4.323-seconds pass at 185.13 mph in the final round of qualifying by Kevin Fiscus that secured top spot in the marquee Radials vs. The World class that pits drag radial-equipped cars against machines with slick rear tires. Fiscus’ run eclipsed Steve Jackson’s previous radial-tire record by just one-thousandth of a second.

Home-state hero Jackson slipped into the number-two slot with a 4.328 effort, followed by Oklahoma’s DeWayne Mills at 4.389 seconds. “I hate that we lost the record and won’t get a chance to get it back because now I’ll have to hear about it all summer until we come back here in October,” Jackson said with a laugh as the rain continued falling in his pit.

A record 47 drivers made attempts at getting into the Radials vs. The World field, with Ray Royer Jr. of Strongsville, Ohio, securing the number-32 bump spot with a 4.916 pass at 151.73 mph in his ’85 Camaro.

Only 30 cars vied for the 32 spots reserved in Outlaw Radial, but they put on a great show in qualifying as Ricky Fox earned the number-one position with the only 4.40 run in the class all weekend at 4.492 and 167.88 mph.

The Xtreme 275 drag radial class drew an astounding 61 entries and after three qualifying sessions it was Edison, New Jersey’s Rich Bruder sitting atop the list with a record 4.658-seconds run at 151.34 mph in his Procharger-equipped ’88 Mustang. Based on ET, the 32nd-place bump was secured by Mississippi racer Jon Gibson with a 5.173 at 138.12 in his ’02 Trans Am, but Tim Meagher and his ’90 Mustang were inserted into the field as first alternate and remarkably got past a troubled Bruder in round one of racing before the rains came.

In Ultimate Street, Ronnie Wilson of Coral Spring, Florida, was the only driver all weekend to break into the 5-teens, earning the pole in his 2000 Mustang with a record 5.178 pass at 131.37 mph, then going 5.98 at 131.66 in winning his round-one match against number-32 starter Rusty Daughtry and his ’95 Camaro.

The Leaf Spring class saw its ET record lowered no less than three times in qualifying, with Tommy Kirk turning the trick first in his ’72 Camaro with a 5.024 in the opening session, then improving to 4.979 in round two. The North Carolina driver’s time on top was short lived, however as just one pair later Ken Marrow Jr. of Ft. Lauderdale, Florida, seized first place over the all-run, 21-car field with a 4.935-seconds run at 149.93 mph.

Significantly, in the lone round completed of Outlaw 10.5 eliminations, Lowry became the only driver from any class in the event to surpass a number-one qualifying time as he went 4.200 at 189.70 in beating Paul Malor and setting top speed of the meet, too.

And then the skies opened up just as Radials vs. The World was about to take the track.

Soon after, class by class, Long called the remaining racers to the tower, where he doled out the cash and time after time expressed regret at having to pull the plug.

To that point it had been a remarkably smoothly run event with minimal delays for clean-up despite several brief nitrous fires on the starting line, a couple of crashes (including Kevin Neal’s wild ride featured elsewhere in this issue of Drag Illustrated) and the inevitable dropping of fluids and broken parts when wheelstanding doorslammers suffer their inevitable returns to earth.

“I’m sorry; I wish we could’ve got it in,” Long said repeatedly to racers obviously disappointed by the cancellation, but appreciative of being treated fairly in payout. “Don’t worry, though, we’ll be back here in October and it’ll be a good one. I promise.”