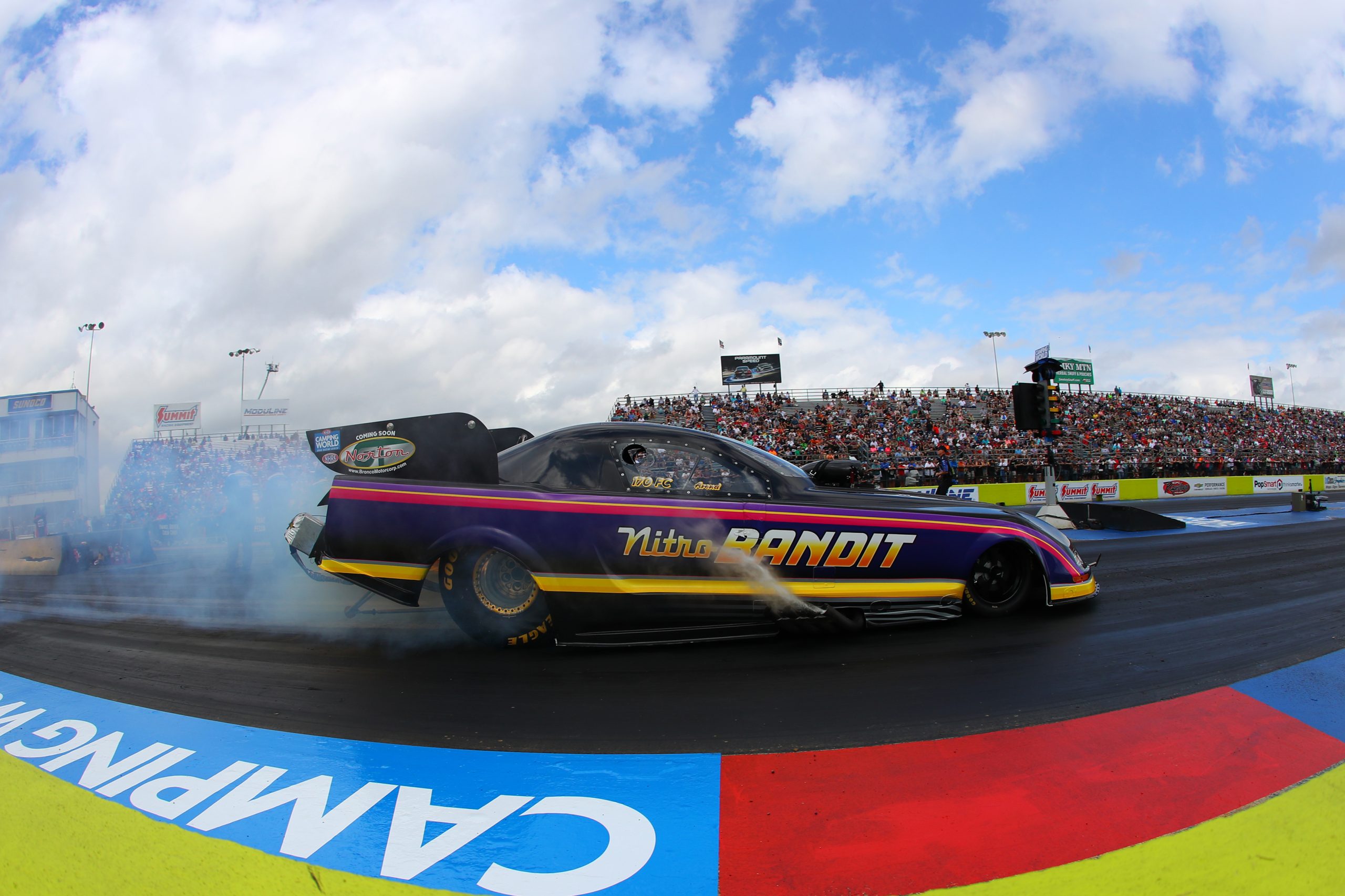 The return of the Stampede of Speed, a ten-day festival of music, drag racing and amazing fan experiences in advance of the NHRA Texas Fall Nationals, was officially announced Wednesday with the release of the special event schedule on www.stampedeofspeed.com. Hosted once again at the historic Texas Motorplex, the multi-use facility located just 35 minutes from Dallas and Fort Worth, as well as in downtown Waxahachie, the Stampede of Speed will feature non-racing activities, concerts, educational and business events for fans from across the country.

“Last year we took a leap of faith with the Stampede of Speed and it paid off with thousands of fans coming to Texas Motorplex, Waxahachie and Ellis County for ten days of racing and entertainment,” said Christie Meyer Johnson, Texas Motorplex co-owner. “Over the next two weeks we will be unveiling new events, a major country concert line-up, fan contests and additional elements making the second annual Stampede of Speed even bigger than last year. Our goal is to welcome visitors to the great state of Texas and introduce them to our facility, the NHRA playoffs and high quality family-friendly events.”

The Stampede of Speed event calendar will feature ticketed and non-ticketed events leading up to the NHRA Texas Fall Nationals. Fans can visit www.stampedeofspeed.com for more information. Tickets will be available for online purchase Saturday, August 6, at noon CT. Highlights of the Stampede of Speed include:

In a true Texas tradition cowboys will drive over a dozen head of cattle along with special guests through downtown Waxahachie and around the historic courthouse to kick off the Stampede of Speed.

Featuring the fastest and coolest nostalgia Funny Cars from the past four decades, the Funny Car Chaos Series will crown their national champions over this two-day spectacle of speed and racing fury. The race day will conclude with a pit side concert event for the fans and participants.

BBQ, craft beer and music will be the theme of the day as some of the best pitmasters show off their tasty delicacies paired with some refreshing cold beer from Metroplex area breweries. Before the country stars take the stage fans will be treated to a bull riding exhibition featuring some of the toughest riders and bulls in the area. Multiple musical acts from Nashville to Texas will entertain the crowd from the afternoon into the evening. A special lantern release will cap off this magical event.

Racing action will be the theme of the day as competitors from across the region race in the Stampede of Speed Shootout featuring Pro Mods, Top Dragster and a host of other high-performance racers. Door-slammers and dragsters will battle it out for bragging rights and the chance to hoist the Shootout trophy. Pro Mods from every association including NHRA will settle their scores on the track with a no-rules, anything goes battle to be the quickest at the Stampede.

See Pro Stock, Pro Stock Motorcycles, Top Alcohol Dragster and Top Alcohol Funny Cars make test laps in advance of the NHRA Texas Fall Nationals. The stars of the NHRA Camping World Drag Racing Series will be on-site preparing for the fourth race of the NHRA Countdown. This open schedule test session is a chance for curious motorsports fans to get a taste of the high-speed excitement that will play out Friday-Sunday.

Join the 2021 Texas Fall Nationals champions Justin Ashley, Ron Capps, Greg Anderson and Matt Smith in a high-end dinner and celebration event in the Champions’ Club. The event will include cocktail happy hour, plated dinner the champions selected, photos and autographs, Q&A session, and special surprise for all attendees.

The wildly popular and free Fan Fest event will begin in downtown Waxahachie highlighting race cars, interactive games, live music and family fun. A massive driver autograph session will be the highlight of the evening with food trucks and kid’s games entertaining the crowd.

For the third year in a row Friday Night Live will turn the traditional qualifying schedule on its head as music, exhibition runs and a special guest DJ will surround the Friday night NHRA pro qualifiers as they try to run to the top of their respective categories at speeds over 330 mph in under four seconds. The night will conclude with a free after-party on the starting line.

The last day for teams and drivers from across the country to make the highly competitive sixteen car fields will conclude on Saturday. Teams will only have two chances to make the show or be relegated to spectator status so tension will be high and the competition jumps to a new level as teams vying to be one of the lucky 16.

Following a massive opening ceremony the top drag racers from around the country will be racing to get one step closer to a world championship at the only playoff race in the state of Texas. Hundreds of thousands of dollars will be on the line as well as the chance for racing immortality. The pits as always will be open for fans to mix and mingle with the racers throughout the day. At the conclusion of the event fans are welcome to join the winner’s circle celebration on the starting line. 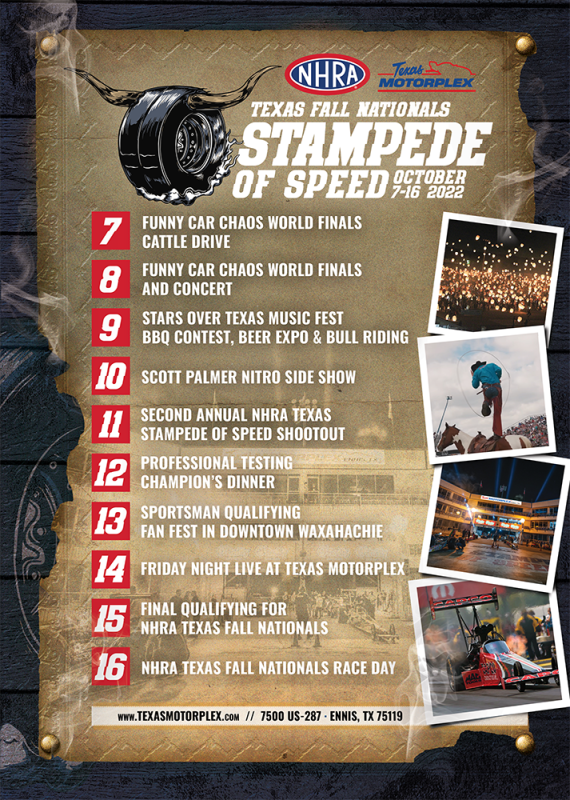