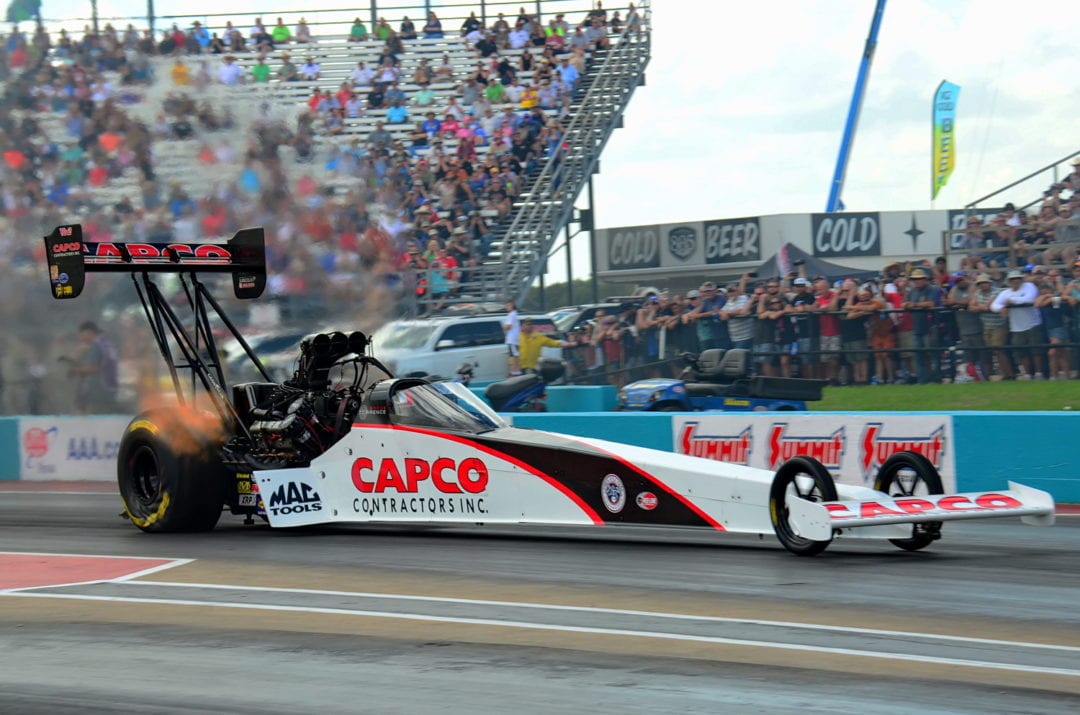 It took a third trip to a Top Fuel final at his home track, but Steve Torrence finally got it done at the Texas Motorplex Oct. 7, defeating Terry McMillen for the AAA Texas NHRA FallNationals title. It also marked the third-straight win for the Kilgore, TX, native in as many races held so far in this year’s six-race NHRA Countdown to the Championships, the 24th victory of his Top Fuel career and eighth of the season, matching Torrence’s career-high total from last year.

The win represented redemption of sorts for Torrence after he survived a violent high-speed wreck last season at the track south of Dallas that also contributed to him narrowly losing the 2017 NHRA Top Fuel championship to Brittany Force, last year’s winner at the Motorplex.

Regardless, once the opening round of qualifying passed this weekend, Torrence said he put any thought of last year’s accident out of his mind. He also claimed not to be concerned about closest championship rival Clay Millican earning 11 of 12 maximum qualifying points, based on leading three of the four sessions (Torrence led Q3 qualifying). Instead, Torrence insisted, winning rounds at 20 points apiece will more than negate qualifying bonuses as he left the track with a 103-point advantage over Millican.

“Clay can do what he’s gonna’ do and we’re gonna’ do what we have to do and if we run into him on race day we’re going to try and chop his head off,” Torrence said. “I had fun through the regular season, but now it’s Katie bar the door. We’re here for unfinished business.

“We felt like we got robbed last year and we’re doing everything that we possibly can to not let that happen again. At the end of the day we’ll let the Good Lord handle the rest. He’s been on our side for the first three races of the Countdown; I hope He continues to be there for the last three.”

After qualifying second behind Millican, Torrence easily handled Bill Litton, Blake Alexander and a tire-smoking Tony Schumacher to reach McMillen. On the opposite side of the ladder, McMillen defeated Mike Salinas, Force and Millican, whose car suddenly lost fire shortly before the finish line while leading. 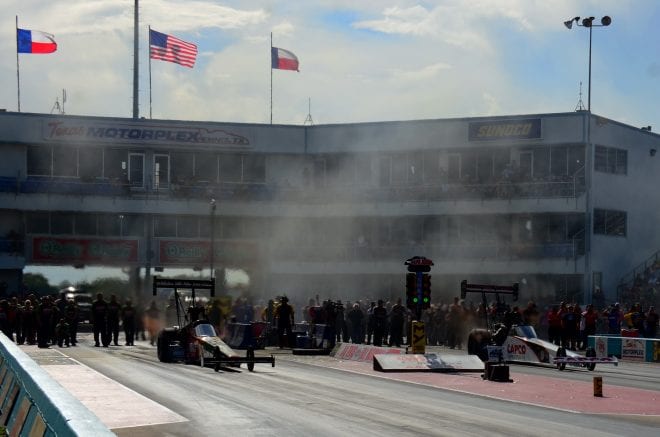 After winning an NHRA Top Alcohol Dragster race at the Motorplex in 2005, Torrence went on to win the championship that year and hopes that history repeats itself. No matter, this weekend’s Top Fuel triumph represents “a check off my bucket list,” he said.

“I couldn’t be more proud to pull off a victory in front of everyone that was here this weekend. There are so many of our fans, guys and girls from the Sportsman classes that I raced with, in addition to all the people from Capco that were here and the gas companies that we work for, our clients that came out and supported us. Every one of these victories is special, no matter where it happens, but it’s really special and important to me to get one in front of our hometown crowd.”

Arlington’s Kebin Kinsley, the only other Texan in the Top Fuel field for the FallNationals, qualified a career-best eighth, but fell in the opening round of racing to Leah Pritchett.