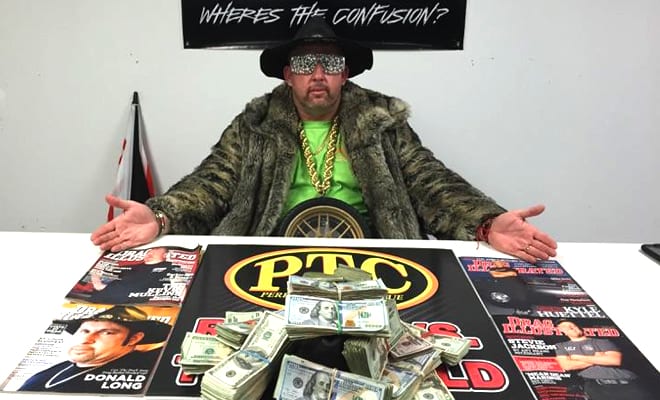 Donald “Duck” Long, purveyor of the world’s finest radial tire races, has upped the ante to an unprecedented level for next February’s Lights Out 7 “Testing’s Over” event at South Georgia Motorsports Park. February 17th through 21st, 2016, racers in the no-holds-barred PTC Radial vs the World eliminator will be competing for an enormous $50,000 winner’s share.

“It’s time to find out once and for all who is the baddest Radial vs the World racer,” said Duck in an exclusive interview with DRAG ILLUSTRATED. “It’s time for anyone who might have been on the fence – anyone with a 10.5-tire car or Pro Mod or whatever – to go ahead and bolt the radials on. This is where it all began back in 2010; this is where Radial vs the World came to prominence, and it’s only fitting that this is where the discussion ends. Somebody is going to leave South Georgia Motorsports Park with $50,000, and that somebody will be the baddest radial racer on the planet – hands down.”

For those who think Duck’s just trying to hype the race and that $50,000 is too good to be true, he’s got the cash – and photos – to prove he’s putting his money where his mouth is.

“By the time we got off the phone with all of these guys, history was in the making,” Duck added excitedly about having the largest purse in radial tire racing. “None of these guys had any obligation to do what they did to make this happen and I’m truly grateful for them.”

In addition to the $50,000 reward, the lucky winner of PTC Radial vs the World will also go home with a special “Outlaw” version of the now-legendary cowboy hat courtesy of Duck, as well as a championship jacket, $5,000 championship ring – and the cover of Drag Illustrated.

Duck’s races are notorious for attracting some of quickest and fastest radial tire cars on the planet, but this massive amount of paper will certainly act as incentive to bring even more of the top players to the pavement. With only a few short months until the Lights Out 7 “Testing’s Over” race begins, expect to see more and more folks strapping on radials and heading down for the hottest radial race the world has ever known in pursuit of a $50,000 pay day.

Qualifying for PTC Radial vs the World at Lights Out 7 will begin the night of Wednesday, February 17th, 2016.