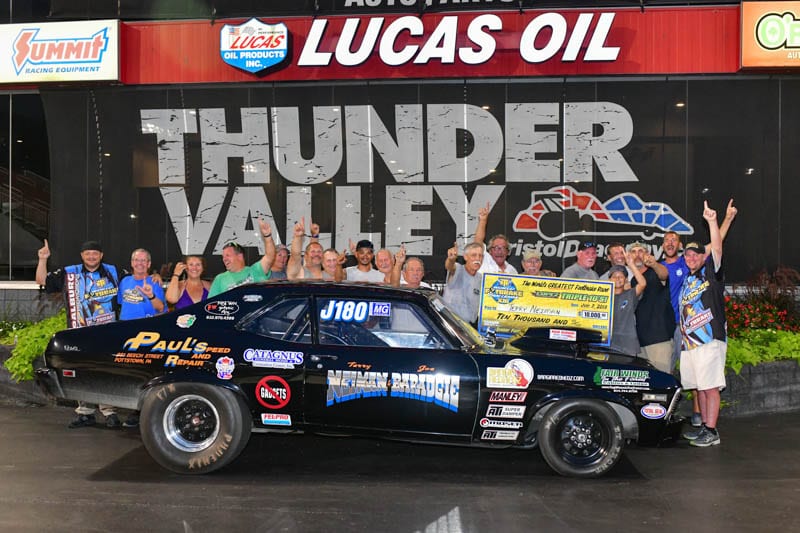 The connotation has been used before but we have come to Day Last of the 13th BTE World Footbrake Challenge at Bristol Dragway. Yesterday’s Lopez Motorsports $10K vent had its – excuse the pun – challenges as Mother Nature set the day back several hours forcing eliminations to be halted at the curfew of 1:00 this morning with 22 racers still left in competition.

Today’s plan was to complete round six and then go into first round of eliminations for Sunday’s race with the remaining Saturday rounds worked in until a Saturday winner is named.

Quarters and Reeves defeated Seigel, Phillips ended Burch’s day and finally Ellison put a stop to Norris. Next round, Phillips received the semifinal round bye run to move him into the final while Ellison and Reeves squared off, with Ellison turning on the red-light to move the man who suffered a severe heart attack last September and came back to win Thursday’s Gamblers Race into his second final of the weekend.

Reeves drove a Ford into victory Thursday, Epperson drove a Ford into Friday’s $10K win… Can you see a pattern? When the ‘Tree dropped, Reeves was .001 from a perfect reaction time on the green side to collect his second big check of the weekend. 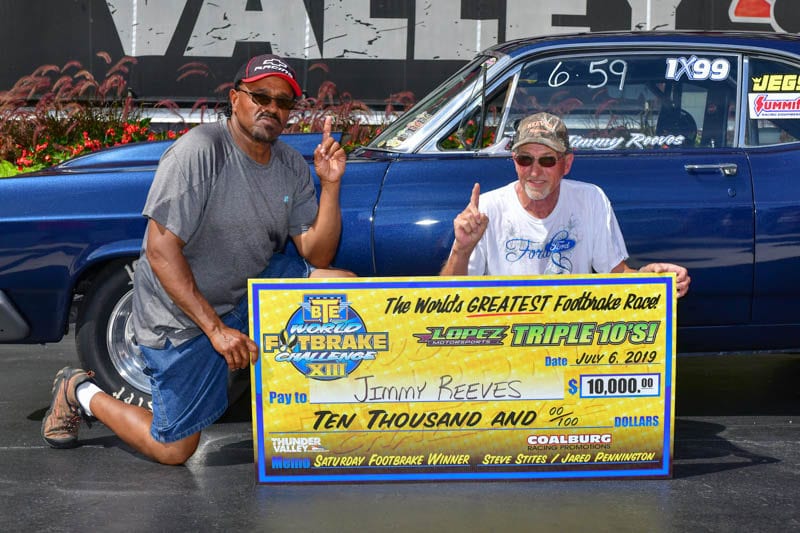 Back to Sunday’s race, down to five cars left, it was David Bell, Bob Walsh, Terry Neiman, Seth Lancaster and Jake Ball. Based on his reaction time of the quarterfinal round, Bell received the bye run to move into the semis. Neiman took .005 win stripe to send Walsh home and Ball turned on the red-light to advance Lancaster.

Semifinals, Neiman on the bye while Bell and his Mustang used a .008 package to send home Lancaster. And the storylines began to flow. We’ve had two Fords win the past two races. We’ve also had Jimmy Reeves win last night’s race which finished this morning. Reeves came back from a severe heart attack last year and Bell’s opponent in the final, Neiman, also has come back from a heart attack earlier this year.

Identical reaction times for both in the final, but Neiman’s dead on the dial with a “3” forced Bell to take too much win light and break out in the process. Sixty-eight years old and still as good as anyone out here, Terry Neiman did what he has done best driving the only race car he has ever driven since 1970.

“We are so very pleased for each of those who chose to spend their 4th of July weekend with us,” said co-promoter Jared Pennington. “Both Steve [Stites], and I along with our families and staff, can’t thank each one of you enough for the support you have given us. We’re already gearing up for an even bigger WFC next year and can’t wait for Labor Day weekend, 2020, and the biggest check to be awarded to a footbrake racer.”