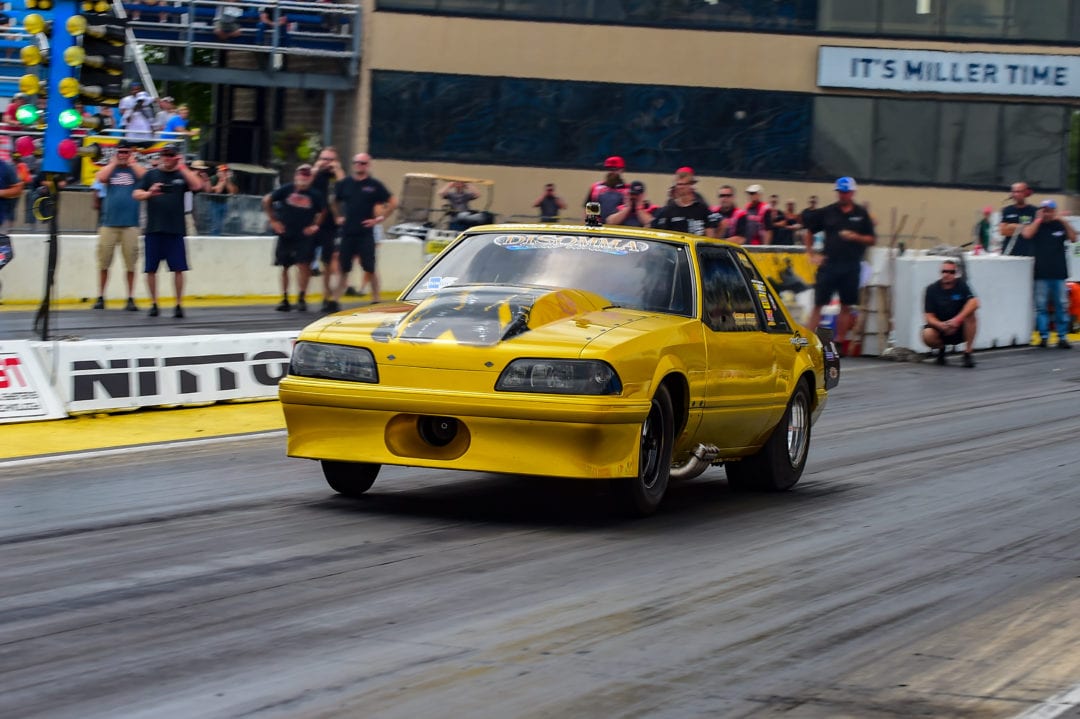 The 13th Annual NMRA/NMCA Super Bowl of Street Legal Drag Racing was one for the record books, as favorable temperatures brought in around 600 race cars, over 250 show cars and upwards of 20,000 spectators to witness all the action at Route 66 Raceway in Joliet, Illinois. After two days of qualifying, Saturday afternoon signaled the start of eliminations that ran saw round one stretched into the late night hours to complete. Before the clock stuck nine on Sunday morning, eliminations were underway with round two action. By mid afternoon hours, eleven individual class champions were crowned. They would be joined by the True Street winner from Saturday’s action to comprise Team NMRA to battle sister series NMCA in the Super Bowl of Street Legal Drag Racing Runoffs to determine the best team and the lucky recipients of the Nitto Tire Diamond Tree Ring and huge celebration in the Aerospace Components Winner’s Circle.

The VP Racing Fuels Street Outlaw class gets a bump in participation at Route 66 Raceway, as the NMCA series joins NMRA to create a large field of Street Outlaw racers. Shawn Ayers (pictured above) qualified the Fletcher Cox-owned ’93 Mustang atop the sheets with a 4.29 at 167 mph, and he would advance to the final round to face Daniel Pharris. Pharris showed the driver mod was active, cutting a .006 reaction time, but the Procharger power pulled Ayers alongside, and at the stripe Ayers got the win by just one thousandth of-a-second with a 4.31 at 167 mph besting the holeshot-aided 4.34 at 172 mph lap of Pharris.

After qualifying on top of the Edelbrock Renegade class with a 7.38 at 187 mph ticket, Team B’s Frank Varela experienced problems in a round one victory. The team did an overnight thrash to change engines, completing it in time to see the sun rise on Sunday morning and prepare for the final round battle with Tony Hobson. Any worries about the new bullet were laid to rest after 1,320 feet of work, with Varela laying down a 7.39 at 184 mph to edge out the 7.43 at 185 mph from Hobson.

The Procharger Coyote Modified class saw Tommy Annunziata qualify number one with a 7.69 at 179 mph lap, and he made his way to the final round on Sunday to face Daniel Pachar. Although the defending class champion Annunziata qualified better, Pachar would get the upper hand in the money round, using a 7.78 at 170 mph to take out a troubled 10-second lap from Annunziata.

Coming off a runner-up finish in Ohio, Sondra Leslie qualified number one in the Steeda Limited Street class with an 8.62 at 160 mph pass. Leslie then turned up the wick for eliminations, clocking a class record 8.57 at 160 mph in the semifinal round to earn a final round slot opposite Michael Ciborowski. Although he defeated Leslie in Ohio, Ciborowski was the underdog on paper here, and an attempted holeshot turned red for the 2014 Mustang, giving Leslie an 8.58 victory lap.

Charlie Booze Jr. collected the top qualifying spot in G-Force Transmissions Coyote Stock after two days of work with a 10.21 at 128.97 mph, then wheelied his way through eliminations to face Darin Hendricks and his teal Cobra in the final round. A couple of NMRA veterans would decide the win, and although Booze launched with another huge wheelstand, he was able to gather it up and claim victory over Hendricks via a 10.24 at 128 mph to a 10.34 at 130 mph effort. 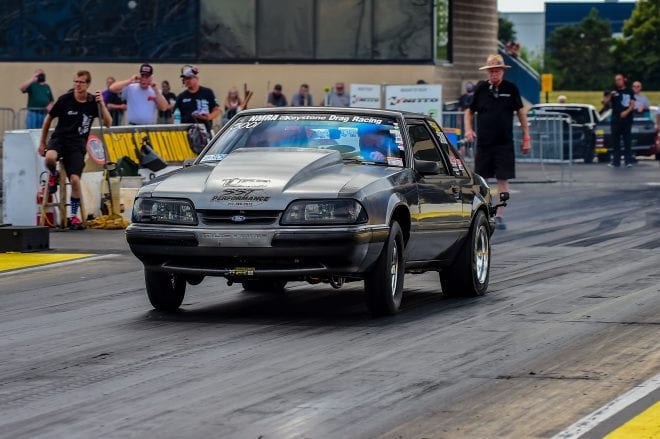 Richmond Gear Factory Stock witnessed Dan Ryntz as the lone car in the 10.30s in qualifying, clocking a 10.34 at 128 mph pass for the top spot. He used that performance to make the final round to face number two qualifier Bart Welte. A pair of ’89 Mustangs would lock horns for the title, and Ryntz took home the title via a 10.42 at 127 mph pass to the 10.59 at 126 mph of Welte.

ARP Open Comp played host to 29 participants, and Dennis Corn nailed a perfect triple-zero reaction time for the top spot in qualifying. After four rounds of work, it came down to Bill Staton and Gordon Harlow for the bragging rights in the final round. Staton would leave first on the 11.65 to 10.10 index difference, but Harlow was much better on the reaction time, pushing Staton into a .06-under 11.59 break out pass to give Harlow’s .04-over 10.14 lap the win and into the Aerospace Components Winner’s Circle.

Exedy Racing Clutch Modular Muscle found past NMRA champion Donnie Bowles at the top of the class with a .000 reaction time in qualifying, but the final round pitted Jason Henson against Charlie McCulloch. Henson got the head start on the 12.07 to 10.68 index handicap, but McCulloch gave chase on a four hundredths better reaction time. That advantage allowed McCulloch to win when his .04-over 10.72 nipped the .01-over 12.08 of Henson by half a fender length.

The Roush Super Stang class had two competitors nailing perfect reaction times, but Miles Wagoner did the deed first to earn top billing at the conclusion of qualifying. The other perfect reaction time belonged to Marvin Knack, and those two drivers sliced their way through eliminations to meet in the final round. Knack got the better reaction time in the final pairing, but a double break out found the .06-under 10.10 pass of Wagoner getting the win over Knack’s more-offensive .11-under 11.73 pass.

Detroit Locker Truck & Lightning also featured a perfect reaction time at the top of the qualifying sheet, this one belonging to Ron Miranda and his 2001 Lightning. By Sunday afternoon, a pair of past NMRA class winners staged up, with Mike Motycka facing defending class champ Randy Conway. Motycka got the handicapped start by the 12.18 to 10.28 index difference, but a 12.16 break out from Motycka meant the 10.29 of Conway would secure the victory.

The Race Star Wheels Ford Muscle class found defending champion Bryan Parker the top qualifier when his 11.502 pass was the closest to index. He then worked his way to the final round to face the always-tough Randy Conway. Already a winner of the Truck & Lightning class, Conway’s chances of a double win were eliminated in a double break out fashion, with Parker’s .01-under 11.49 the less offensive against the .08-under 11.67 of Conway, giving Parker the win. 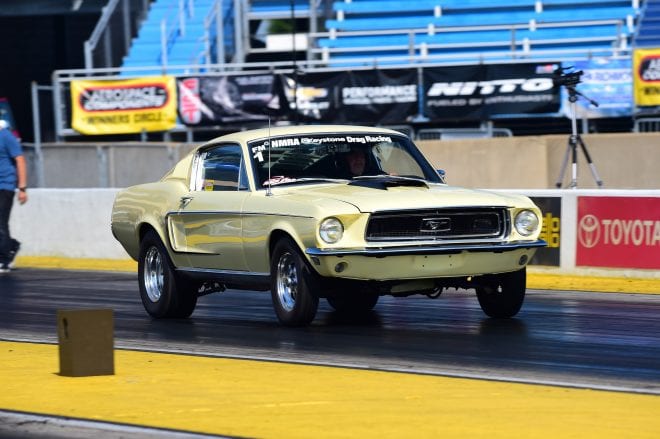 The NMRA and NMCA joined forces in the QA1 True Street class, with 69 cars and trucks lining up for a shot at the overall True Street trophy, as well as individual 9-second through 15-second class titles. The feared 2010 Shelby of Randy Thomas is a proven True Street winner, and he added another trophy to his case with an 8.78 average to take overall win. Mike Niehaus stick-shifted his way to the runner-up spot with a 9.20 average, the wheelstanding Mustang GT of Jason Struckman grabbed the 10-second title, Frank Beal collected the 11-second class accolades, Tim Apple won the 12-second class, Nathan Chastain earned the 13-second title, Gastor Brown trucked home with the 14-second win, and Belinda Moore rounded out the True Street class with the 15-second title marking her eighteenth class win.

Once the class titles were secured, the Super Bowl of Street Legal Drag Racing Runoffs was staged up, with the NMRA winners now working as a team to defeat the NMCA class winners head-to-head. The NMRA came into 2018 with an 8-4 advantage over the NMCA series, and although the NMCA claimed the first two race wins, the NMRA team rebounded to earn the next six win, putting the NMCA in a must-win situation to survive. Two races later, it was all over as NMRA claimed win number seven, and the final tally on the day saw the NMRA with 10 wins to the NMCA’s three, pushing the overall record to 9-4 in the NMRA series favor, and giving every NMRA class winner the coveted Nitto Tire Diamond Tree ring.