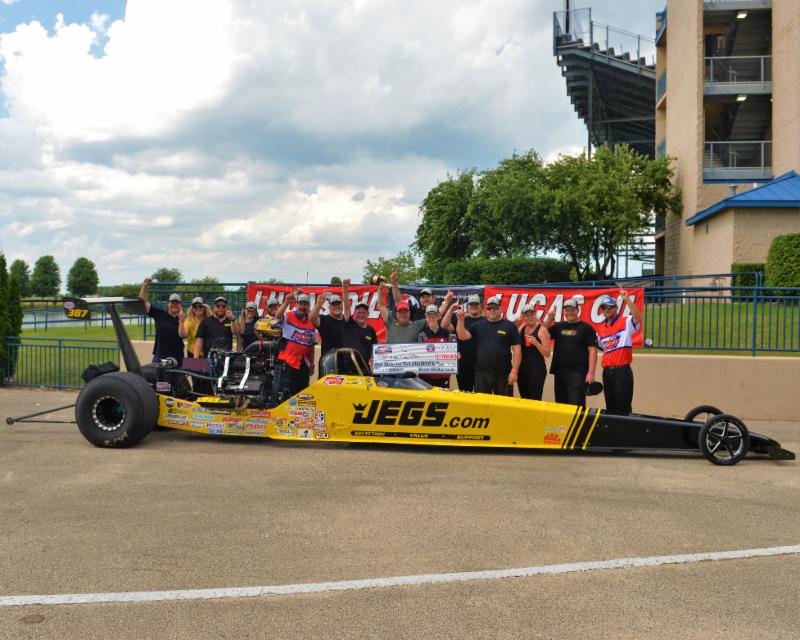 Mike Coughlin remains unbeaten in his JEGS.com Top Dragster ever since changing to a Fowler F12 roots-style supercharger, winning Sunday’s Burndown at Sundown Division 3 race at Route 66 Raceway. It was Coughlin’s second win in as many weekends and the first time he’s ever won two races in a row.

“If you had come to me a month ago and said I’d win two in a row I would have said ‘no way, no how,’” said Mike, a two-time Division 3 champion in Top Sportsman who switched to Top Dragster three years ago. “This is such a different racecar since we switched to the Fowler. It’s so easy to drive and it responds to everything we ask of it.

“This win is for the guys on this crew who made this change so seamless. They’re the best. Big thanks to Dad (Jeg Coughlin Sr.) too for all of his advice, and once again it was a blast having my son Clay with me.”

Sharing the spotlight in Chicago was Coughlin’s nephew Troy Coughlin Jr., who raced to his fourth runner-up finish of the season in Top Alcohol Dragster, as well as Paige Coughlin, Mike’s niece and Troy Jr.’s sister, who went five rounds in Super Comp.

Prior to last weekend’s victory in Indianapolis, Mike had gone exactly two years since visiting the winner’s circle at an NHRA event, which makes earning consecutive wins just one week apart extra special.

“When you have a car like this it just seems everything just falls into place,” said Mike, who now has 28 career wins in NHRA competition. “You’re not constantly fighting the car every pass. You become better in the driver’s seat because you can focus on driving. We’re thinking if things keep going this way we may be add to our race schedule.” 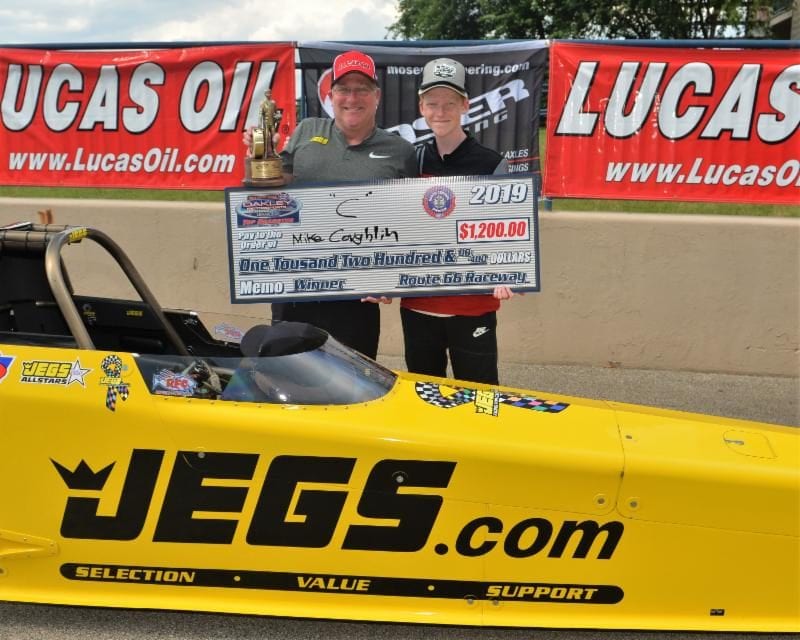 Three weeks ago in Norwalk, Ohio, Troy Jr. drove his McPhillips Racing Top Alcohol Dragster to the Winner’s Circle. This weekend he came up just short of another trophy, yielding to Matt Sackman in a dead-even race.

“I thought we’d won when I went past the final cone but I looked up and saw Matt’s win light come on and I was like, ‘that must have been really close,’” Troy Jr. said. “As it turns out, it couldn’t have been any closer, so congrats to Matt and that team over there. I like Matt a lot and he’s certainly paid his dues in the sport working on Antron (Brown’s) crew over there at DSR (Don Schumacher Racing.) I’m happy for him.

“It was a crazy day with Uncle Mike winning again in Top Dragster and my sister knocking ’em down in Super Comp. We all stayed busy. At one point I was watching Rich (McPhillips, car owner and tuner) and the rest of the guys just doing their thing on our dragster with so much professionalism and I was thinking how lucky I am to have this incredible group of dedicated people setting such a great example for me of what it takes to win. I’m so proud to be here.”

Sunday’s action featured Troy Jr. beating Will Smith and Julie Nataas before bowing to Sackman. He’ll next race at his home track of National Trail Raceway in a JEGS E.T. Series event in his sportsman car.

It’s been an eventful and fruitful summer for Paige, who continues to impress in her JEGS.com Super Comp dragster. Just a week after racing to a Round 4 finish at the D3 race in Indy, Paige bettered her result by reaching the fifth round here in Chicago before losing to class heavyweight Luke Bogacki.

“It was such a fun weekend, watching my Uncle win again in Top Dragster and seeing my brother get to another final round,” Paige said. “And once again Justin Beaver and my brother had my dragster so dialed in and we were able to get to the fifth round.

“It’s crazy how many rounds we’ve gone in the last three races. I’m learning so much and, win or lose, the experience has been so cool. I think racing Luke this afternoon was one of the highlights of my racing career. He’s one of the best drivers in the world and watching what he does and how effortless he does everything is just beautiful to me.

“We entered this weekend eighth in the points and if this quarterfinal finish helps move us up a few spots we may start thinking about adding some races to the schedule. For sure we’ll be with Troy next weekend at National Trail Raceway and we’ll go from there.”

Falling to Paige on the day was Jeff Spierling, Jim Gerakaris, Mike Jirousek and Ken Carson.