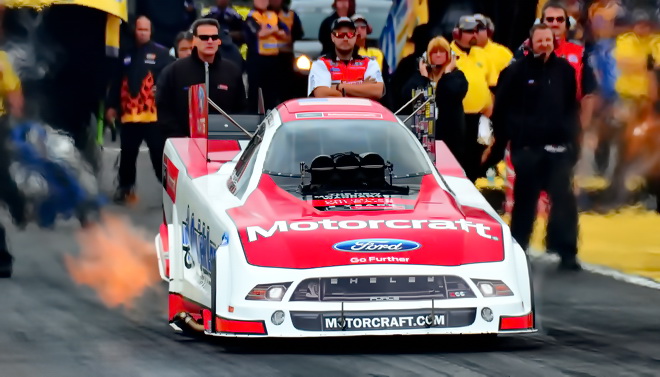 If Bob Tasca knows a turnaround is coming–and the Funny Car driver is confident one is–having that turnaround begin to take shape at his home track might be the ideal way to make a resounding resurgence.

That is at least the plan for Tasca, who has been left scratching his head far too often during the recent stretch in the NHRA Mello Yello Drag Racing Series. But Tasca is ready to put a few of those rough patches to rest, starting this weekend at the second annual Auto-Plus NHRA New England Nationals at New England Dragway in Epping, New Hampshire.

The race is the 11th of 24 in the 2014 NHRA Mello Yello Drag Racing Series season and the Rhode Island native sees it as the perfect opportunity to showcase his 10,000-horsepower Motorcraft/Quick Lane Ford Shelby Mustang running at a championship level.

“With the way our season is going we need some home court advantage,” Tasca said. “We need a good weekend and it couldn’t come at a better time than right now. I can tell you no one is working harder than we are to turn our season around. Unfortunately we have nothing to show for it yet. I know we are very close to turning the corner and there is no better time than the New England race.”

Despite a first-round loss at the Epping event a year ago, Tasca thoroughly enjoyed NHRA’s debut in the region. The build-up was tremendous and Tasca eagerly did his part to drum up interest for an event that entertained fans at a fervor level all weekend. But if the debut was a massive success, Tasca, who has four career Funny Car victories, thinks the encore will be that much better.

“It was awesome,” Tasca said of the inaugural event. “I know firsthand how hard so many people worked to make it happen. To have that kind of turnout for the first event was awesome. I know this year’s event will be just as big. Fans were talking about it all year long. I can’t tell you how many people from races this year that keep telling me they will see me in New England. It will be another great race.”