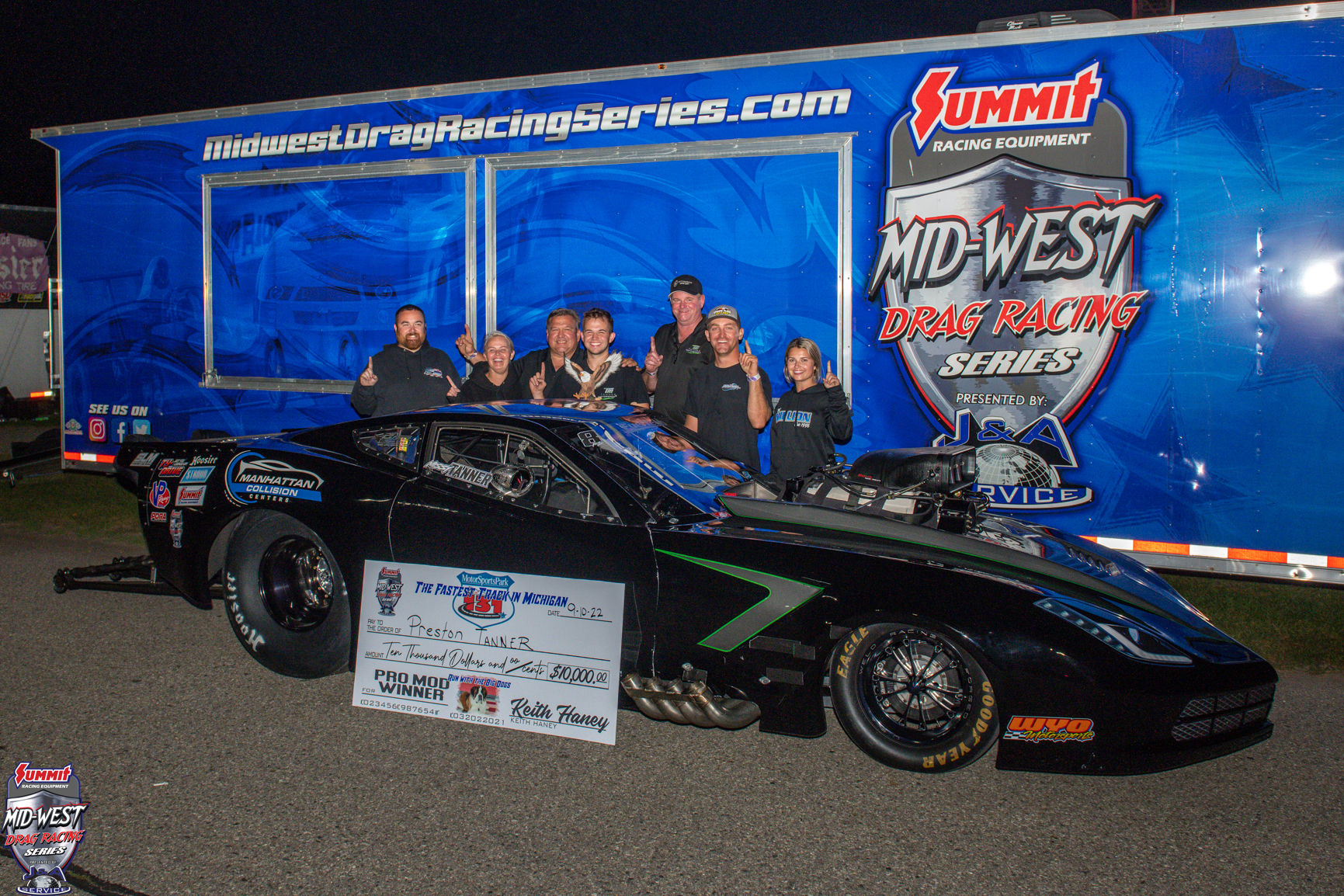 A red light also decided the outcome in the J&A Service Top Alcohol Funny Car final round, where Chris Marshall won over Annie Whiteley to secure his third MWDRS victory. 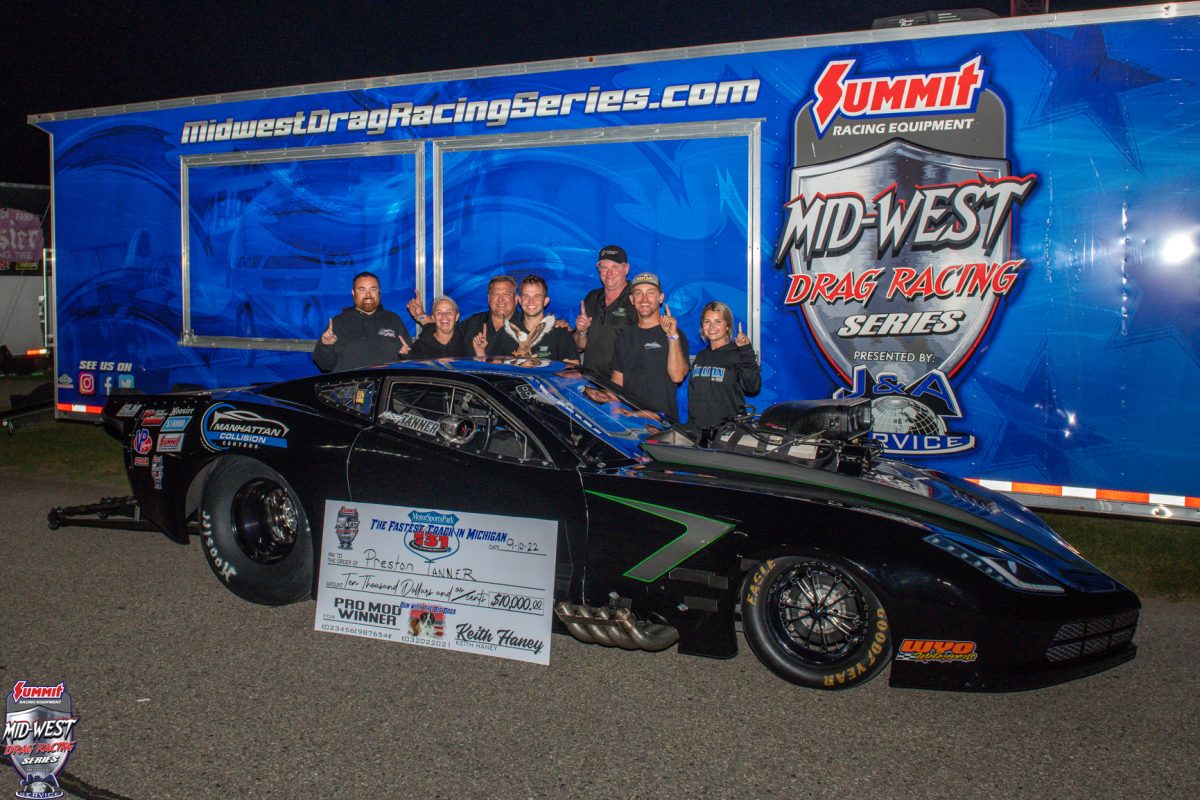 Preston Tanner rolled into US 131 Motorsports Park with a full head of steam after winning his first Pro Mod race in PDRA Pro Boost just a month ago. Driving his screw-blown “Sweetheart” ‘15 Corvette tuned by Jeff Pierce, Tanner was confident he could go rounds in his MWDRS Pro Mod debut.

“I knew we’d have some tough competitors when we showed up, like the Proline boys and Brandon Snider,” Tanner said. “Most of the competition there is pretty stiff, so I didn’t think we’d show up and just win. I knew we’d have to earn it. But I knew Jeff and I were both doing our job, and we’d be pretty hard to beat.”

Tanner’s confidence grew after qualifying. He was the provisional No. 1 qualifier after the first session on Friday evening, then Dustin Nesloney grabbed the top spot in Q2. Tanner reclaimed the No. 1 spot in Saturday’s final session, though, throwing down a 3.629-second pass at 204.73 MPH to lead the 19 cars that attempted to qualify for the 16-car field.

“It just shows that Jeff knows what he’s doing,” Tanner said of the No. 1 qualifying effort. “He knew the track conditions and knew what it would take and it worked. In all honesty, qualifying is all Jeff. That’s his showcase for all his effort in this car.”

Tanner started eliminations with a 3.657 at 203.80 to beat Scott Krueger in the opening round. With bracket-like consistency, Tanner ripped off a 3.651 at 202.16 in the second round to defeat Tom Ladisky, who went red.

A marquee matchup followed in the semifinals, where Tanner lined up against Brandon Snider, who’s excelled in both outlaw and “legal” Pro Modified competition. Tanner’s .005 reaction time helped him win the round, as he ran a 3.64 to hold off Snider’s 3.619.

“I was watching Brandon’s lights in qualifying, and I was like, ‘Man, I need to get up on the wheel,’” said Tanner, who used to watch Snider race Pro Extreme when he was racing Jr. Dragsters. “Dad was like, ‘Hey, you want to even the box out?’ I was like, ‘Yeah, we probably should because he’s been on it and he’s going to throw down.’ He threw down. I was setting up to be .010 and I was .005. There wasn’t much room for error, but I knew we had to go for it. Look at the number he threw down. It was crazy. Just the fact that I can race with these guys is just unbelievable.”

In the final round, Nesloney went red by .011, negating a 3.648 at 204.82. Knowing he’d already won, Tanner lifted shortly after passing the Christmas tree because his screw-blown ‘Vette was getting out of the groove.

“I might’ve been able to get it back in the center, but I saw the red light and there was no reason to risk having anything going wrong by staying in it,” said Tanner, who thanked parents Andy and Missy, sister Lexi, Pierce, crew member Chad Crawford, and supporters Wyo Motorsports, M&M Transmission, G-Force Race Cars, Kinetic Engineering, and Manhattan Collision Center. “I saw my win light, so I was like, ‘All right, we’re good. We’ve got the car in one piece and the win light, so that’s all that matters.’ We had our best 60-foot in the final and it was on track to lay down probably fastest of the weekend. We knew Nesloney wasn’t going to take it easy on us.”

Tanner, who’s in his second year of Pro Mod competition, enjoyed his first MWDRS race. He praised MWDRS and US 131 officials for their efforts toward a successful race weekend.

“It’s a really good atmosphere over there,” Tanner said. “The cars are really good. I think they had 19 cars going for 16 spots. The fans at US 131 were insane. There’s fans in the stands at most Pro Mod races, but that race was packed. You looked up in the stands and it was jam-packed. It just shows that the sport is alive.” 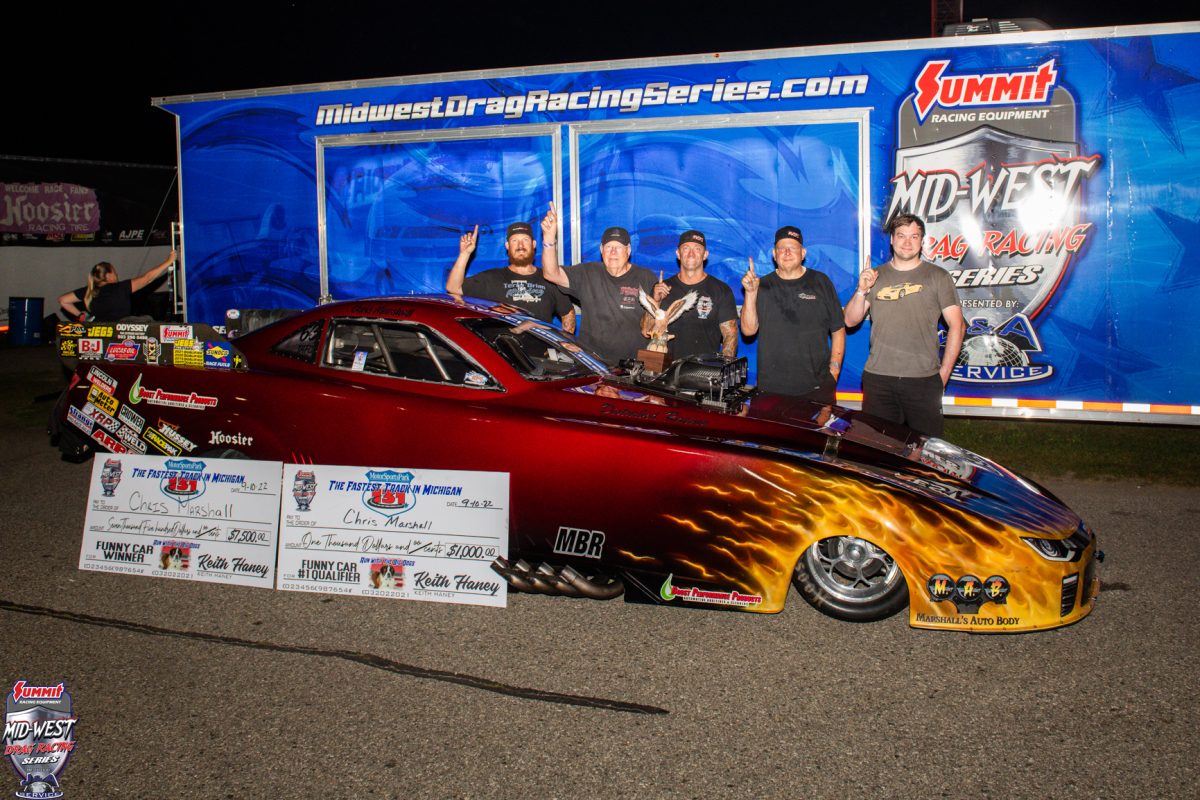 Coming off a disappointing showing at the NHRA U.S. Nationals near Indianapolis, Top Alcohol Funny Car racer Chris Marshall was admittedly feeling down. But after switching back to proven, time-tested parts, the Oregon-based driver found himself with the quickest entry on the property at US 131 Motorsports Park.

“My car runs fine with all my regular old stuff, and this weekend proved it,” Marshall said. “I took all that new stuff back off and put all my old regular stuff in it and it ran great and dominated the class. ET wise, the car was running really good. If we would’ve run like that in Indy, we would’ve been competitive.”

With Indy in the rearview mirror, Marshall kicked off MWDRS testing with a 3.58 at 213 MPH. He had the front wheels up in the air for most of the run, so he added weight for qualifying. That adjustment calmed the car down enough to make quick, consistent passes, including the 3.608 at 211.37 that gave Marshall the No. 1 spot.

“Jim tried to beat me in the first round,” Marshall said. “He had a great light and I had a terrible light. I squeaked by on that one by two thousandths of a second. Apparently, Jim told Annie what to do too, so she went to go chop down the tree and she went .002 red on me. If she would’ve been green, I would’ve had my hands full there. At least I had a .034 light on that one, so I was safe.”

Even though he got the win – his first of the season – Marshall was hoping for a better performance in the final round.

“After analyzing the data, really what happened there was I just didn’t have enough for that track,” Marshall said. “The track was so good. Clutch cars are finicky to wheelspeed, so the track was so good that the clutch separated. I needed to put some more clutch on it. I easily could’ve ran a .57 or a .58 in the final if I would’ve just got after it a little bit. But the car was running so consistent and smooth down the track every single run, I just hated to mess it up.”

Still, the win gave Marshall a much-needed boost in the points. He entered the weekend third after a broken starter prevented him from running the first round of eliminations at the last race in St. Louis. But points leader Sean Bellemeur didn’t attend the Martin race, so Marshall and Annie Whiteley went around Bellemeur.

“It was imperative that we got back in the hunt by winning this race,” said Marshall, who’s finished second behind Bellemeur in the MWDRS TAFC championship the last two seasons. “Clearly, it helped that Sean Bellemeur didn’t show up. He obviously has won every one he’s been to, so he’s a tough competitor. Fortunately for Annie and I and anybody else in the running, Sean isn’t doing all the races this year. That gives us a chance, to be honest. Sean’s a great racer and a great car. My understanding is he’s still going to miss one more race. As long as I can keep ahead of Annie, I think I should be doing pretty well as far as the championship hopes.”

Marshall thanked his crew, noting, “I can’t do this without them. They do everything right every time. It’s very difficult to do. When we can minimize errors, that really makes my world a lot easier to go out and focus on getting down the track and doing my job. I definitely have to thank the crew for being there, showing up, and doing their job.”

Marshall also thanked his wife, Briana, who is typically right there by his side at the races, but had to miss Martin due to a bone infection.

“This was the first race I’ve won where she wasn’t here with me,” Marshall said. “That was tough for both of us. I am fortunate for such a wonderful and understanding wife for allowing me to come do these things even when she can’t be here.” 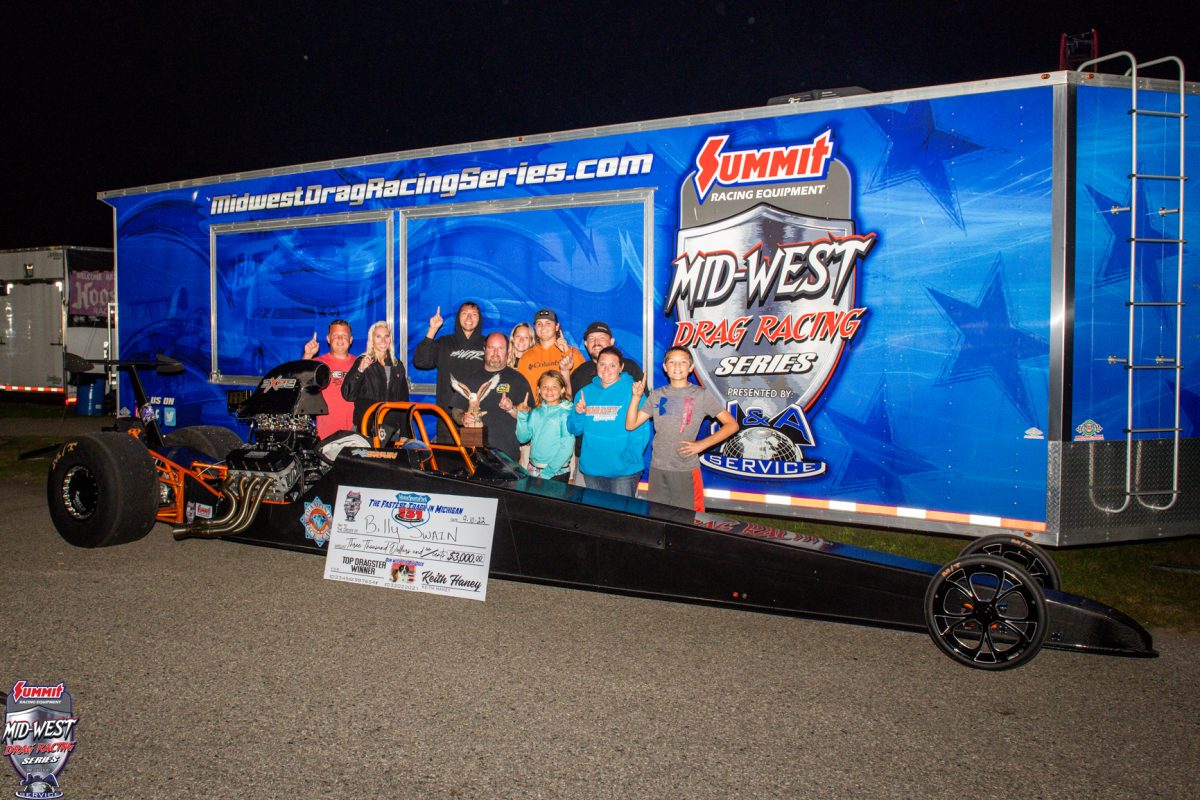 A pair of Michigan natives faced off in the Top Dragster final round. Jared Ledford grabbed a slight advantage at the starting line, but Billy Swain made up the difference with his 4.475 on a 4.47 dial-in. Ledford followed with a 4.418 on a 4.40 dial-in. Both drivers qualified in the middle of the 20-car qualifying order, which saw Anita Strasburg qualify No. 1 with a 3.695 at 198.24. 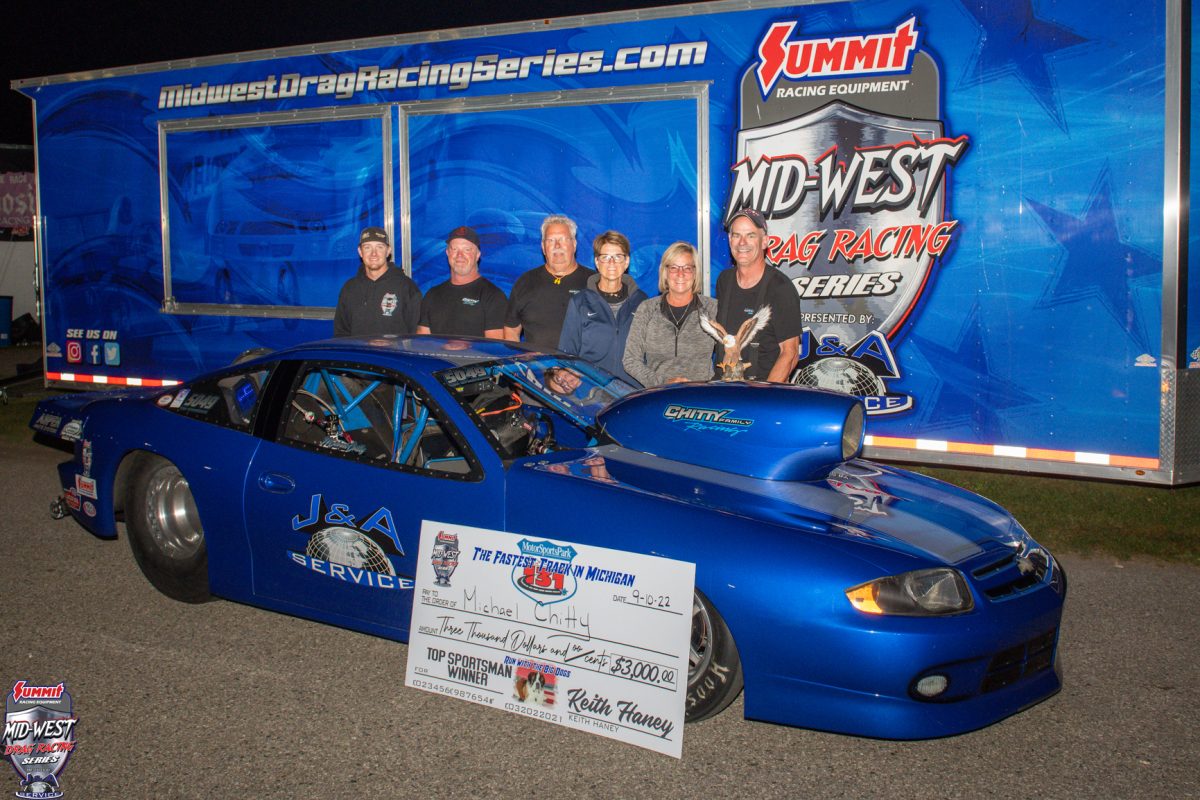 Top Sportsman championship contender Michael Chitty improved his odds for the title with his final-round victory over Maximus Butcher. Driving his J&A Service/Chitty Family Racing Cavalier, Chitty left the starting line first and posted a 4.311 on a 4.29 dial-in for the win. Butcher, the son of Top Sportsman veteran and No. 1 qualifier Glenn Butcher, recorded a 4.969 on a 4.95 dial-in. It was Chitty’s second consecutive final-round appearance. 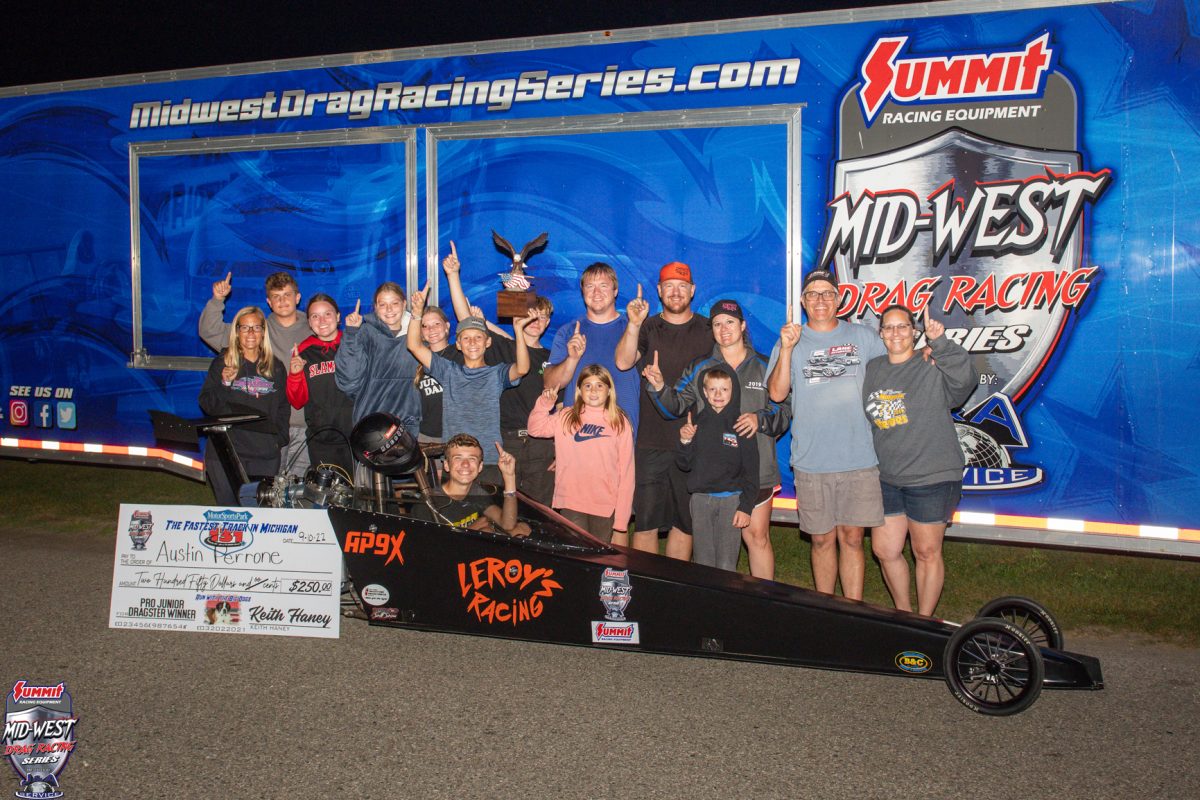 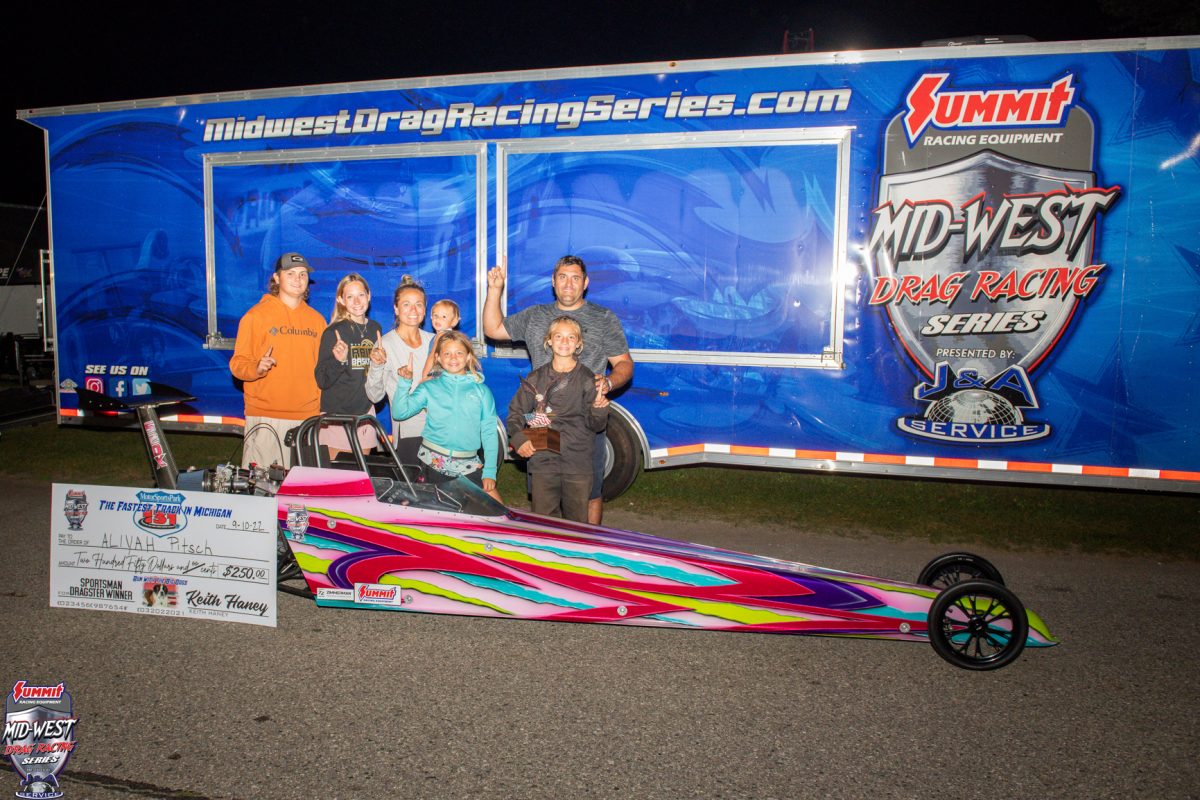 The 2022 MWDRS season rolls on Oct. 7-8 at Osage Casino & Hotel Tulsa Raceway Park for the fall Throwdown in T-Town, where the series will also complete eliminations from the MWDRS Great Bend Nationals.