The 2018 NHRA’s Mello Yello Drag Racing Series season was a continuing education for the always-learning Tim Wilkerson. This past year, the Springfield, Illinois, resident confirmed a finish in Funny Car’s top 10 for the 14th time and for the 11th consecutive season.

Looking ahead, Wilkerson will compete in his 500th NHRA nitro Funny Car race in 2019, and the Levi, Ray and Shoup Ford Mustang driver is eager to take two decades of successful experience into a new era.

“It’s great to have that No. 5 on the car for 2019,” said Wilkerson, who climbed as high as the No. 3 position during the Countdown to the Championship. “That’s the highest number I’ve had for a long time, so I’m pretty happy – but of course you always want to do better.”

Over the course of the season, Wilkerson reached three final rounds to gain valuable points towards his strong finish. Most impressively, his first final of the year came in Epping at the New England Nationals following a massive blow-up. The team rallied and recovered efficiently from the fiery engine explosion to send their boss to the 40th final round of his nitro Funny Car career.

Two months later, Wilkerson made the Countdown to the Championship with a clutch move as the sun set on the regular season at the U.S. Nationals in Indianapolis, tallying enough marks to lock in and fight for the title. When the Countdown began at the next race, Wilkerson and his team were starting their ascension from the No. 10 position, but they were more than ready to move up.

The group launched into the most critical six races by reaching the final at Maple Grove Raceway and followed up at the next event with a final round at their home track, Gateway Motorsports Park near St. Louis. A semifinal finish in Dallas capped their Countdown success.

“The cream rose to the top there at the right time,” said Wilkerson. “As soon as we got our difficulties behind us, we could see that we had a pretty good car – and everyone else could see it, too. It was a lot of fun, especially in the Countdown.”

Wilkerson looks to rake in even more achievements in 2019, when he will celebrate his 10th anniversary of making the productive move to a Ford Mustang Funny Car body. Since that time, he has cleared a top 10 finish in NHRA’s championship standings every year. Wilkerson has accumulated 10 national event wins for Ford, bringing his win total in the class to 20.

“We’re really excited about the new Ford Mustang bodies,” said Wilkerson, who has campaigned a Ford Mustang Funny Car since 2009. “We’re hearing that they should be coming out the middle of December or near the first of the year. We’ll get one of the first ones, and then it’ll go to [longtime chassis builder] Murf McKinney to mount, then we’ll send it off to have it painted. All of that takes time, so we may not have it before we do our pre-season testing, but we’re excited.

“What we’re most looking forward to in this next year is Ford coming back to NHRA in the Funny Car class,” said an elated Wilkerson. “We’ve had offers from other manufacturers to jump ship over the years, but we believed that these Ford Mustang bodies are the best. We stuck with them and won some races, and I tell you what, we’re proud to be part of the Ford family. Historically, each time there has been a new Ford body released, it’s shown improvement. I expect this new one will be as good as or better than what we’ve had.”

Next season, in addition to piloting the new Ford Mustang body, Wilkerson is dialed into what will take his team to the next level.

“What we struggled with the most early on was our procedural parameters; that’s it,” said Wilkerson, who is not only the driver of the Levi, Ray and Shoup Ford Mustang but also the crew chief and team owner of Tim Wilkerson Racing. “Next year, I’m going to be more of a stickler on getting things right, and I think that’s going to make us better as a team.

“We’ve got a real chance at continuing this performance roll we’ve been on, and I’d like to see us stay in the top 5 all season long. I believe we can. There is parity in the class, and the competition is just crazy good, but I’m up for it. We’ll be even better next year than we were this one.” 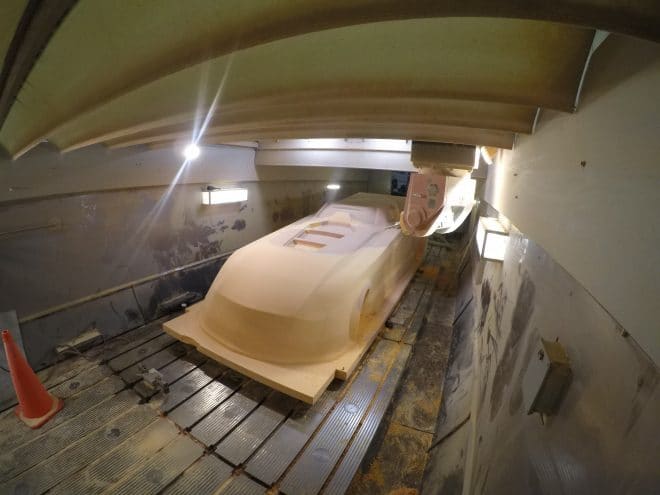 The first of the new Ford Mustang bodies being cut in Detroit. (Photo courtesy of Campbell Martketing/Ford Performance)