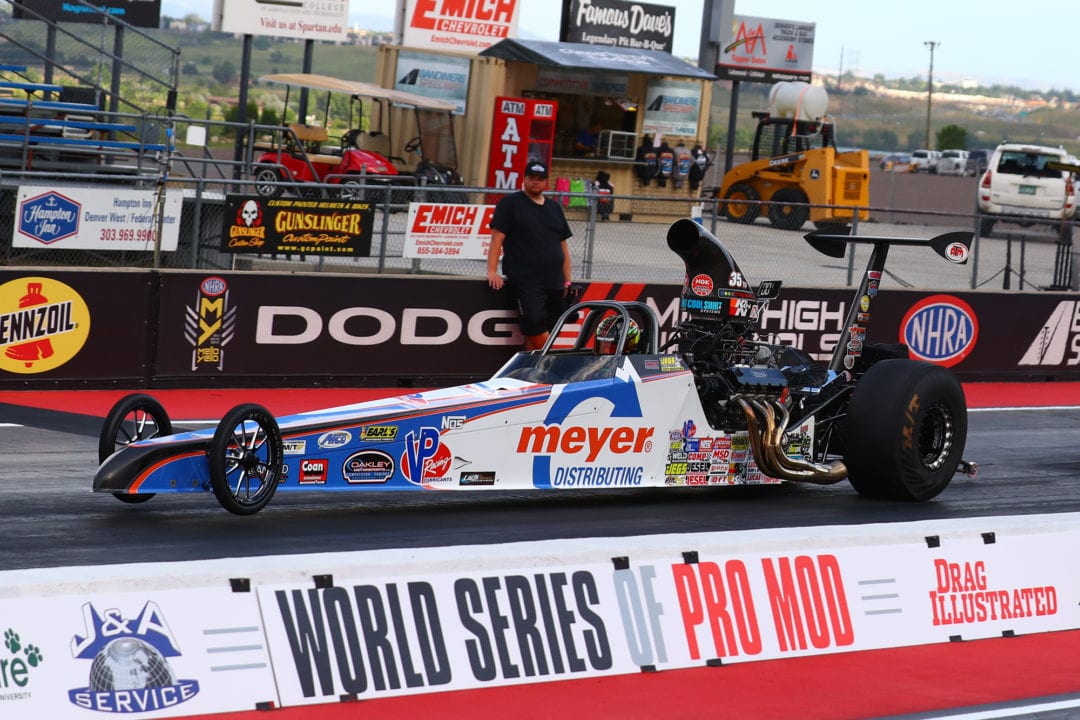 The third annual World Series of Pro Mod event at Bandimere Speedway was completed this past weekend. JB Strassweg drove his Meyer Distributing Top Dragster right up the mountain and claimed the $10,000 prize for winning the class. The cliché of no mountain for a climber, JB climbed and conquered “Thunder Mountain.”

“Racers talk about the challenge of racing on the mountain, when we made the decision to come compete, I started preparing and it obviously paid off,” Strassweg stated. “We made a converter change and played with the laptop a few times and we had a consistent race car.”

Strassweg qualified solid eighth with a 6.29 at 210 mph. The elapsed time was only about .015 hundreds off typical times in the Midwest. JB would square off in the finals against a familiar face in Emilee Novak and her blown combination. Novak qualified 10th with a 6.31 at 219 mph. They both executed outstanding runs in the final, with Strassweg coming out on the right side of a double breakout.

“We were just tied together going down the track, I made a call based off of where we were on the race track and it worked out,” Strassweg said. “The race was extremely tight, the money, the glory, none of that bothered either one of us.”

Strassweg is currently chasing points in the NHRA Lucas Oil Series and is currently 26th, but just 62 points out of 10th with lots of racing yet for the former NHRA Division 3 Top Dragster Champion. Strassweg is sitting 3rd in the North Central Division points chase. Yet, making the trip to compete for $10K in conditions that are never seen in the Midwest fueled the long journey.

“Going to compete against racers that we never see on a pre-entry basis, in conditions that we never see makes my wheels spin not only on the car, but my mind,” Strassweg said. “What separates most is the ability to adjust to conditions and I like a challenge. What do you have to change to keep the candles lit and tires planted to turn on the winlights? That made it much sweeter for the 1,100 mile trip.”

Strassweg and the Streetway Marketing race team will take a week off to prepare for the grueling three in a row as Bowling Green, U.S. Nationals and Earlville will take place starting the 22nd of August. The team will be ready to collect win lights, points and the coveted NHRA Wally.