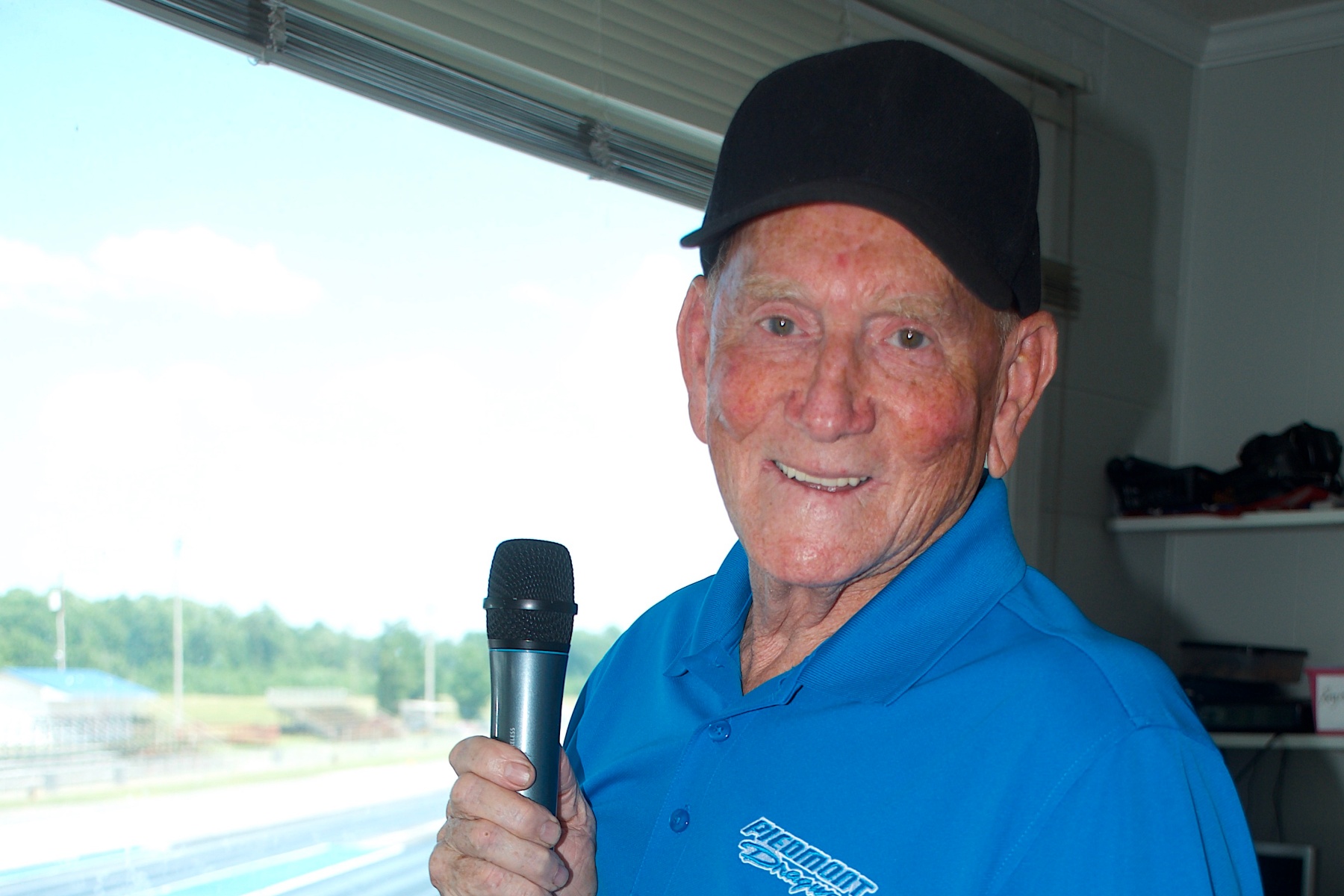 Beloved announcer Alvin Dilldine has officially retired from full-time announcing after a celebrated career that has spanned just over a half-century. Dilldine retired in June, four days shy of his 80th birthday. He’s perhaps best known for his tenure at Piedmont Dragway, calling the action of the legendary Big Dog shootout and many other events. He’s also been a familiar fixture at Rockingham for many of the big bracket races held throughout the year.

A longtime resident of Kernersville, North Carolina, Dilldine’s travels took him all over the Carolinas, and also deep into Florida and Michigan, as his ability to excite a crowd with both humor and extensive racing knowledge was well-known and sought after.

Long before he found his way to the announcer’s booth, Dilldine was first exposed to street racing by his good friend, Ronnie Beal. “Ronnie invited me to tag along one night, and there must have been 600 people lined up for a mile on both sides of the road! After I saw all the people and all the cars, it just kinda stuck and I was hooked on racing!” Dilldine recalls.

Piedmont Dragway was actually the first organized dragstrip Dilldine ever saw, and he quickly landed a job in the 1960s working on the starting line, and in the coming years even became part owner of no less than 13 different race cars.

His big break into announcing came in 1972, and completely unexpectedly when then-track owner Alfred Williams asked Dilldine to bring a case of water to the tower. “After I got up there, Alfred says to me, ‘Come over here and talk to these people while I go down and work on the scoreboard.’”

Dilldine wasn’t the least bit interested in talking over the PA, but Williams insisted. “Well, while I was up there, I begin to think about working in the air-conditioned tower versus working down on the starting line with the sun beating down on me, so in about 30 seconds I made a career decision!” Dilldine laughs.

It was a decision that served him well for the next five decades, and he feels fortunate to have witnessed the early careers of racers such as Rickie Smith, Don Carlton, Bill “Grumpy” Jenkins, Sam Carroll, Ronnie Sox, and many more. “I saw all of those guys…often on the same day!” he beams.

Dilldine promptly fell in love with the sound of high-winding Modified and Super Stock cars. He also witnessed the Pro Stock match race circuit during the boom years. He was present for the launch of Pro Modified, as well as Piedmont’s Big Dog series, and all sorts of other regional gatherings that followed.

“I feel blessed to have also been exposed to things like Top Fuel dragsters and Funny Cars and all sorts of door cars. I came out of Sparta, Tennessee, where we plowed with a mule and rode in a wagon, so my career in racing has been both funny and supernatural!” he insists.

When it comes to announcers in the sport who inspired him, he says Bob Frey was among his biggest influences and helped shape his own announcing style.

Dilldine has also worked for so many different track owners, he says he’d hate to start naming names because he’d certainly leave someone out. “I’ve gone to a banquet before working for one man and leave working for another,” he laughingly recalls. He was once invited to announce at Dunn-Benson Drag Strip (now GALOT Motorsports Park) for a weekend and wound up staying five years.

It was always an adventure, and Dilldine was up for almost any gig. Exactly one week before his 80th birthday, he still had the energy to pull off a trio of 15-hour days alongside Steve Earwood at Rockingham during a big event. “Believe me, I was tired after that and my wife, Linda, worries about me these days because I’m so old!” he laughs. “Even though I still feel pretty good, I’m retiring simply because it’s time.”

As for his retirement plans, he hopes to do some traveling with Linda, and says he still plans to do some announcing on occasion at special events. “I’ve learned a lot and I’ve been blessed by a lot of different people. It’s the people in racing who’s made up my life, not the cars in particular, but always the people,” he smiles.