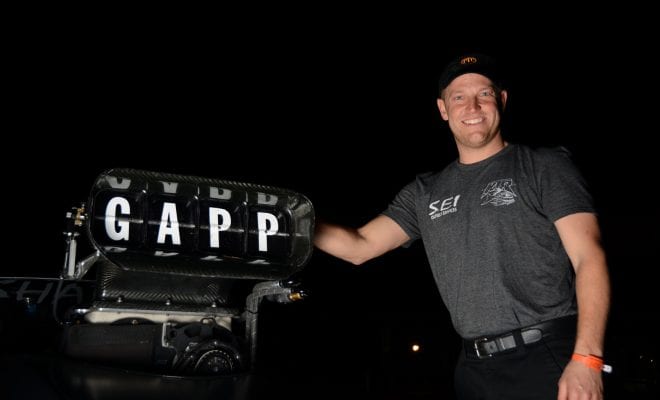 “Stevie Fast” Jackson, amongst drag racing’s most beloved characters, made headlines this week with a Facebook post/press announcement on his team’s account announcing that he and the fan-favorite “Shadow 2.0” late model Chevy Camaro would not be competing in the fast-approaching No Mercy 9 at South Georgia Motorsports Park (SGMP) outside Valdosta. For anyone paying close attention, this wasn’t groundbreaking news as he’d actually admitted as much on my show last Wednesday when he came on to talk about his incredible win at the NHRA U.S. Nationals.

Basically, long story short (or…uh…long), up until the big crash he endured earlier this year at the NHRA 4-Wide Nationals, Jackson has had two arrows in his quiver. He had the red-white-and-gold Jerry Bickel-built Bahrain 1 Racing Camaro that he debuted at the start of the 2017 NHRA Pro Mod Drag Racing Series season for all his big-tire endeavors, and the Phil Shuler-owned, Rick Jones-built “Shadow 2.0” for any and all grudge racing and radial-tire type work he needed to do. Following the top-end ordeal at zMAX back in the spring/early summer, Jackson and crew were forced to switch their famed matte-gray sixth-gen Camaro, which was basically purpose-built for small-tire racing, over to NHRA-legal Pro Mod trim.

With the way the NHRA Pro Mod schedule bunches up races – three-in-a-row in June and damn near the same thing this fall – it was going to be virtually impossible for the Georgia-based squad to take the car from a setup that just won the NHRA U.S. Nationals and get it ready to go radial racing at SGMP. Plus, it’d be kind of crazy. Obviously, Donald Long’s races are amongst the biggest happenings in drag racing and pay “serious cheddar” as Jackson might say, but he’s said that his primary focus is NHRA Pro Mod and let’s be honest – with the level of competition over there right now, making any sort of radical changes to a car that just rolled out of the winner’s circle would be hard for anyone to go through with.

Now, I’ll admit that a Donald Long-produced drag radial race sans “Stevie Fast” seems sacrilegious, and I’m sure there are a slew of folks that are bummed out or altogether devastated that the tool-dealer-turned-drag-racing-superstar won’t be behind the wheel at SGMP. (Side note: I’m one of those people, and I’m glad that he will still be there, hanging out and generally being awesome.) However, I’d like to take a moment here to argue that this could be good news. For as long as I can remember, short a few rough outings, come the semifinal round in Valdosta, you can basically count on “STEVE JACKSON, EVANS, GA” being in one of those four remaining spots on the ol’ CompuLink run sheets. With Jackson and company out of the picture at least for late September’s small-tire extravaganza, I feel like there’s an opportunity for someone new to emerge as a contender, potential winner and – if the good Lord is willing – a superstar personality. It might not be a name we’re completely unfamiliar with that takes Stevie’s place in the late rounds, but it might be – and it might be someone that’s just been waiting for an opportunity or to have a little race day luck fall their way so they can get a little bit of the air-time and publicity that goes with making a late-rounds run at one of Duck’s deals.