Stevie “Fast” Jackson made a decision to open 2019: no matter the situation, no matter where he stood, he was going to be in attack mode.

Through qualifying at the first race of the 2019 NHRA Pro Mod season, it looks like a good choice.

Despite not making a full run in his first two passes, Jackson stayed aggressive at the 50th annual NHRA Gatornationals and now he has the quickest pass in NHRA Pro Mod history because of it.

Jackson delivered an incredible 5.665 at 253.99 mph on Saturday at Gainesville Raceway to set the E.T. record in his Bahrain 1 Racing Chevrolet Camaro, taking the historic top spot in the quickest field in NHRA Pro Mod history.

“We decided at the beginning of the season we were going to aggressively attack the season,” Jackson said. “We decided in Orlando (during the NHRA Pro Mod warm-up event) we were going to make them outrun us every single run. We went up there swinging. I thought it would go .67 or .68, but (tuner) Billy (Stocklin) did a great job and it was a killer run.” 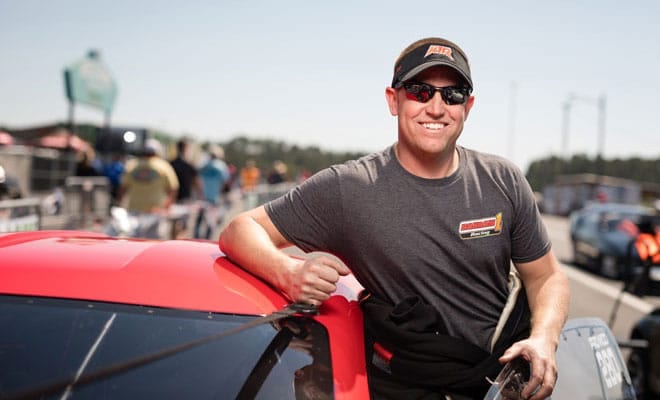 Jackson debuted the new RJ Race Cars Camaro in Orlando, and it’s been impressive right out of the box.

He was runner-up to Jose Gonzalez, who qualified No. 3 with a 5.672 at 259.31, at that event and was killer when it counted in qualifying at  Gainesville, even if it wasn’t by conventional methods.

“We changed some stuff in the car for that run that you wouldn’t believe,” Jackson said.

Stocklin agreed, noting with a laugh that the changes they made weren’t the typical ones you would make going into a third qualifying session not near the qualifying bump.

But the radial and outlaw racing background has served both well in the NHRA Pro Mod ranks, thinking outside the box to reach new levels.

Stocklin has mounds of notebooks filled with data from his wealth of racing experience, leaning on that to make aggressive calls when traditional thinking might suggest a more conservative approach.

“It helps tremendously,” Stocklin said. “There’s this pool of data and how we approach the car is different from a lot of the guys. We come from radial racing and we may learn something in one venue that we can carry forward in another.”

The bottom line for both, though, is to stay aggressive no matter what.

It served Jackson well as he finished 2018 strong, winning the U.S. Nationals in Indy and at St. Louis, and he is determined to take that to another level in 2019. After all, being timid won’t cut it in Pro Mod in 2019. The qualifying bump in Gainesville was a surreal 5.753, with six drivers not making the field despite running in the 5.70s.

Jackson admitted that approach may lead to a DNQ this year, but with the immense talent in the field, there will be a who’s who outside the field at every race. In Gainesville, it was the likes of Steve Matusek, Sidnei Frigo, Jim Whiteley, Rick Hord and Mike Castellana missing out, so Jackson knows staying aggressive is vital.

It’s an approach that gave him the NHRA Pro Mod record on Saturday and a massive legion of fans over the years. Many of them were there at a sold-out Gainesville Raceway, and it’s something not lost on the fan-favorite driver.

“That’s the greatest compliment in the world when people come out to watch us race,” Jackson said. “(The fans) are the fuel that motivates me. Yeah the records are awesome, but somebody coming 375 miles to come watch us race makes those 2 and 3 a.m. nights worth it.”