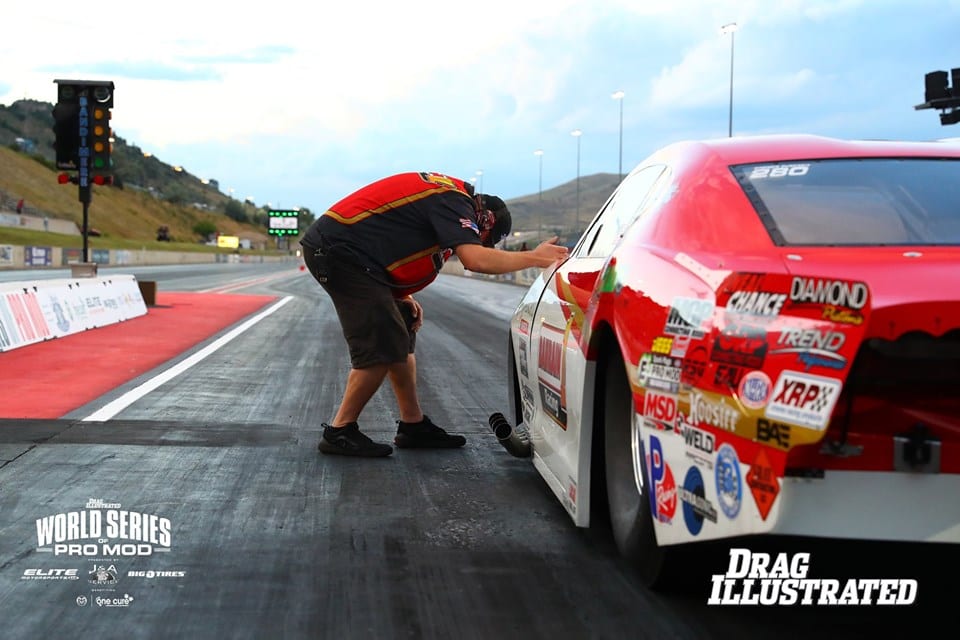 As Stevie “Fast” Jackson departed Bandimere Speedway less than a week ago, he left the Drag Illustrated World Series of Pro Mod with mixed emotions.

The first one was obvious.

After a red light during his first-round loss against eventual $100,000 winner Scott Oksas, the NHRA Pro Mod points leader wondered what might have been. He went a blistering 5.932-seconds in his blown Bahrain 1 Racing Camaro, ultimately throwing away the quickest blower run in Bandimere Speedway history. Understandably, that part of the weekend left him with a sour feeling.

“I rolled the dice. I was up on the wheel. I saw amber and I just went for it, and I went .020 red. The crew chief did a good job and the driver sucked.”

With that still lingering, there were positives Jackson could take away from his experience on Thunder Mountain.

He left the event last year raving about the advancements his team had made from running at an altitude of nearly 6,000 feet, winning in Indy and St. Louis on the NHRA scene immediately after leaving Bandimere Speedway.

Jackson left Denver with the same feeling this year as well. His team tested a number of components during the series of runs he made, and nearly all of it seemed to be beneficial.

“We’re down 700 horsepower up here, but to run 5.93 up here and maybe have gone a little quicker, that’s a good sign,” Jackson said. “We did a lot of stuff in the engine program and the supercharger program to compensate. From a component, testing standpoint, this was a tremendous, smashing success for Indy.”

With a sizable points lead, that could set Jackson up nicely for the final four races of the NHRA Pro Mod season.

After a two-month break, their season continues at the U.S. Nationals, and Jackson wanted the rest of the competition know he’ll be ready, in part thanks to what he learned on Thunder Mountain.

“The things and tools we used to win Indy (last year) I learned (in Denver), and I have learned things I’m going to use again this year,” Jackson said. “I’ve got a bad hot rod.”

As for the scene in Denver, Jackson couldn’t praise the weekend enough.

Though he joked that it “seems like this place has my number,” Jackson had nothing but excitement for the track, the fans and the entire event.

“Driving a couple thousand miles to come here might not seem smart to some people, but coming here to run on a stage this big in front of this many fans, with a potential chance to win, I wouldn’t change it for anything. I love racing here,” Jackson said. “I love it when the fans come out. These fans eat, sleep and breathe motorsports like I do, so it’s a cool deal.”

As for the red light, Jackson said he knew immediately he had gone red. But at the very least – or perhaps out of sheer anger – he felt he should put on one last show for the fans. In the process, the run of 5.932 at a corrected altitude of 9,000 feet might have sent a message to the rest of the class.

“I saw it,” Jackson said. “I look at the tree every time and I saw it, and I went ahead and ripped it down through here. I was mad as hell, and I had a bunch in it and I wanted to see what it would run.”