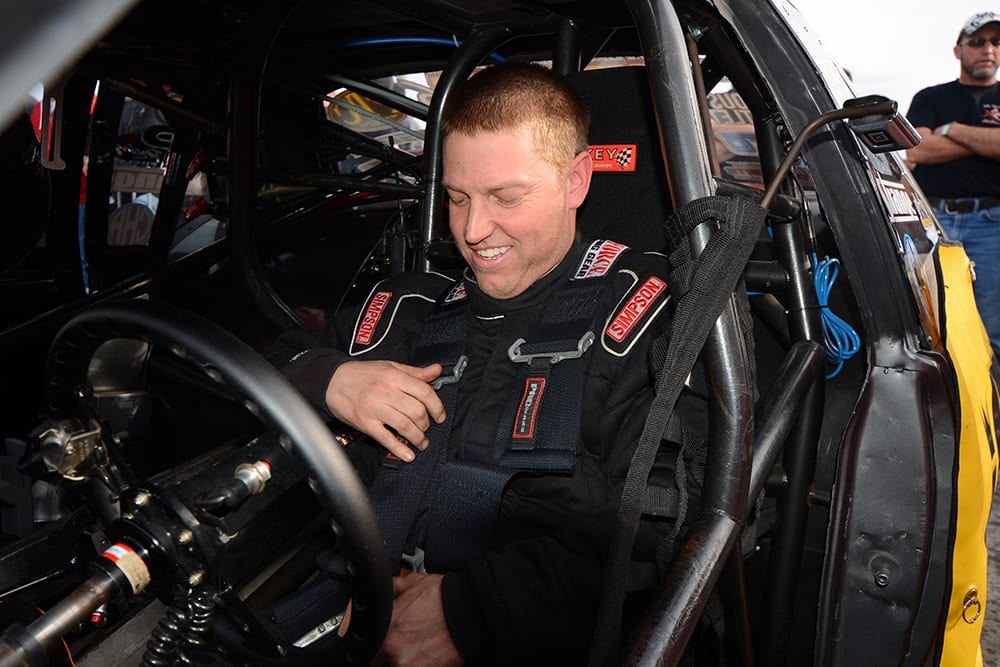 The 2013 Pro Nitrous World Champion, Steve Jackson, is returning to competition in 2015 and is hungry to defend his 2013 title. After a wild ride to the 2013 Championship and a trip to race with the Arabian Drag Racing League during the offseason, Jackson was handed a rude awakening, when he, along with several other high-profile teams, were suddenly dropped from Al-Anabi sponsorship. This sidelined Jackson for much of the 2014 season, prohibiting him from defending his hard earned title. 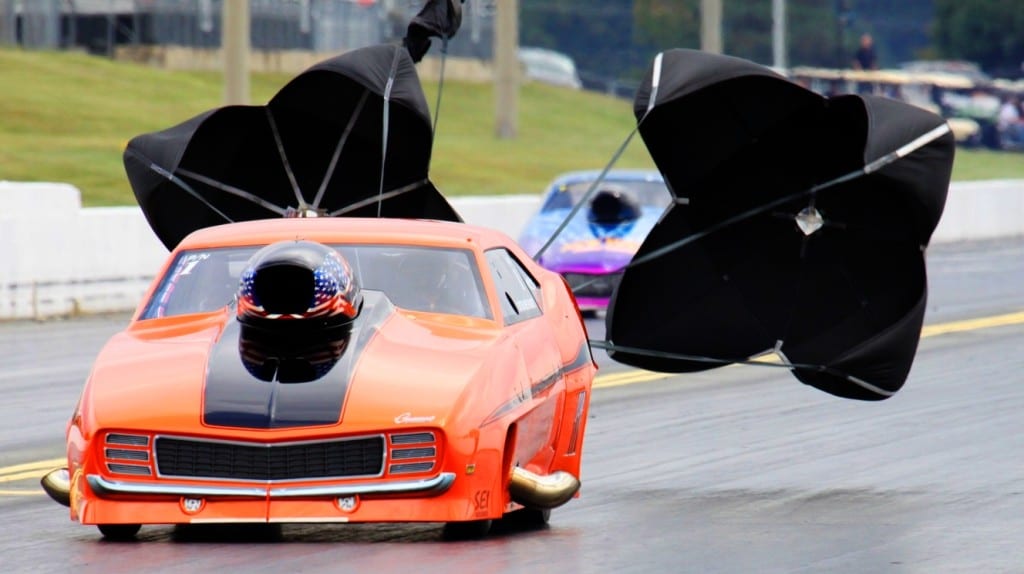 “It killed me at first,” Jackson said of not being able to defend his title. “The whole 2013 season was kind of a blur. It was really thrown together. Even to be able to win that Championship was tough. I had all knowledge and thoughts that we were coming back to run in 2014. At the last minute our sponsorship and funding got pulled. So it took me a couple of months to even get started putting a new deal together. I was pretty fired up. Disappointed is not the word. Pissed off is. But it’s kinda the way of the world.”

That new deal would come at the hand of Jeff Sitton and SEI Oil Field. “After I won the Championship in 2013 and after I got back from Qatar, Jeff and I  signed a deal to race together in 2015. It took us half a year to get a car, truck, trailer, engines, stuff like that,” Jackson explained. Preparations included a signature orange Jerry Bickel built ‘69 Camaro with a Reher Morrison powerplant. “It took the majority of the year to get everything in place. Then we came out and ran the last two PDRA races to get our feet wet with the new car and see where we were at with our old powertrains. Our main focus the majority of last year was preparing ourselves for 2015.

“For me, it’s hard to find someone to work with that’s as passionate about racing as I am.” Jackson continued. “I love racing more than I like breathing. So for somebody to partner with me – sponsorship or otherwise – you’ve got to be pretty into it. You’ve got to be pretty hardcore. I want to win and I don’t care what it takes. If there’s a way to get out front, I’ll find a way to get us out front. Me and Jeff work well together because he has the same mentality. Along with me and Jeff, we also have my partner and best friend Phil Shuler. I have  been racing with Phil for the last 10 years. He actually owns the radial tire car that we won Lights Out 6 with in Valdosta. He’s as hardcore as the come, and doesn’t mind one bit chunking the crankshaft out on the ground to win. Then we have Billy Stocklin. I call him Big Swig. Hes a genius behind the computer and helps tune the Pro Nitrous car. He’s very good at what he does and wants to win as bad as I do. I try to surround myself with people who have the same mindset as we do.”

Although Jackson was sidelined from Pro Nitrous for much of 2014, he continued racing in other arenas. He stays behind the wheel nearly year round running grudge and radial events. Recently he and his team won the Radial vs. The World event in Valdosta, Ga.

“I run just about everything with wheels on it,” Jackson explained, “but our 100% focus this year is on PDRA Pro Nitrous. The grudge racing and radial tire racing and other stuff just fills in the gap. I would be at the race track 365 days a year if you’d let me. So running 10 events a year is not enough to keep my plate full. I grew up grudge racing, so I kinda gotta stay to those roots. We enjoy racing for money. If something pays decent and the competition is good, we’ll go. I like crushing people most of all.”

Clearly illustrated by his passion for racing – and winning – Stevie Fast doesn’t back down easily and isn’t a competitor to be taken lightly. His return to PN competition late last season was quickly met with a touch of staging controversy with fellow competitor Lizzy Musi.

“There were shenanigans at Rockingham that had to do with the tree not falling for a very long period of time,” he retold of racing Musi at Dragstock XI. “I stepped off the throttle because I was on the two-step for a very long time. As soon as I stepped off the throttle, the tree came down. We think it was just a tree malfunction, but it kinda carried into Virginia. I guess it’s because of my grudge racing background, but I have seen every sort of starting line game there is. Hell, I invented half of them. I embellish the fact that I’m very hard to rattle up there. So at Virginia when we did the burnout and came back, she wouldn’t go in. She wouldn’t light the top bulb and go in. So I just put the car in neutral and sat there. I told the guys on the radio that I was just going to let it sit there until it ran out of fuel or caught on fire. After Rockingham, our team owner Jeff told me, ‘Before you go in, I don’t care if the car is 300 degrees and on fire, if you’re not in any immediate danger, you will not stage that car until she stages.’

“It’s nothing personal. I actually really like Lizzy and I respect her as a competitor, so it’s not personal, but it is what it is. The fans love it. If it’s somewhat of a rivalry now that’s good too. I don’t know if it will carry into 2015. All I can tell you is that last year I had a pea shooter, and now I have a bazooka and anybody that gets in my way, I’m going to blast ‘em. If they’re coming to win they better have everything lined up. All their duckies better be following. 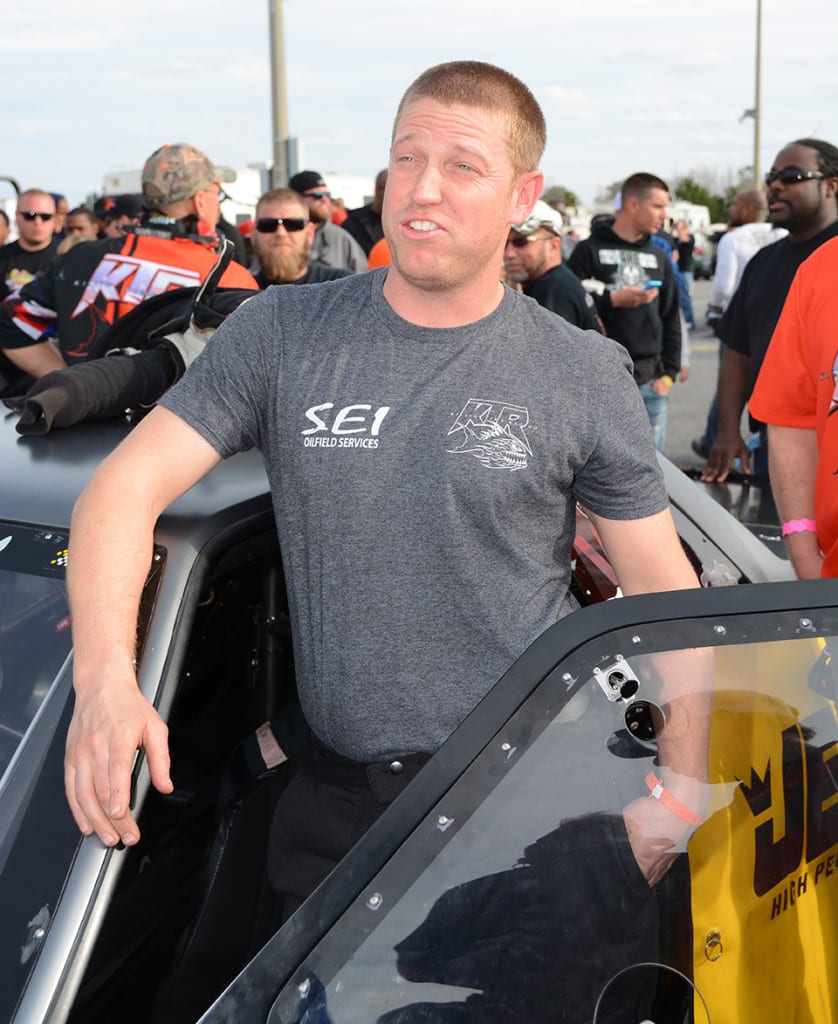 “It’s going to be good,” continued the Georgia native, whose fast talking rivals his performance on the track. “Pro Nitrous is going to be the hardest class to win. Everybody’s got nice cars. Everybody’s got nice motors. Everybody’s got good stuff. It was already very difficult before. This year will be the hardest, I think, it’s ever been to win. I think you’ll see a lot of different winners. And that’s not me being modest. It’s just that everybody who does this at this level is good at what they do. I talk a lot of trash, but if you have a Pro Nitrous car that you run at the PDRA, you’re pretty accomplished. That’s just the way it is. I like to think that we’re pretty smart. We’ve got some good people behind us. Our team owner believes in us. And if we don’t win, it won’t be for lack of effort.”

Jackson is quick to point out that his success, past and future, can be greatly attributed to his crew. “I want to thank my crew:  My longtime crew member Chris Johnson, Jack Barbee, Jeff, of course, our team owner and sponsor, Billy Stocklin our tuner. Phil Shuler runs a Top Fuel car for Spencer Massey as his day job, and comes and hangs out with us when he’s not racing. So he’s got it about as bad as I do. It sounds cliche but I have to thank all the people that make all the parts and pieces that make these cars tick. Sometimes they really have to go out of their way. There are times when you have to call vendors at 3:00 in the morning at their house and try to get them to get up and make us parts. Racing at this level is about people. You have to know people. You have to have integrity. If you don’t take care of the companies that support you, you won’t be racing long. Money almost can buy you in, but it can only get you halfway. You gotta have some brains behind you. I feel like we have a good ensemble of people who not only have the brains, but talent and passion as well. Passion is the biggest thing. When you run out of talent, passion will keep going. I always like to say that I can overcome any obstacle as long as it presents itself to me.”

That passion has helped Jackson overcome the loss of a major sponsor to come back and fight for another Pro Nitrous title in 2015. The season kicks off with the Texas Nationals March 19-21.

“This will be a good year for the fans, I can promise ya that. I’m excited about it. I’m fired up. I enjoy the camaraderie at these things. I’m very fortunate to be able to call drag racing my day job. Very, very few people get to do that and I’m just thankful to be where I’m at. Looking forward to seeing what everybody’s cooked up over the winter. The winter time is kind of exciting, everybody trying to keep what they’re doing hush-hush. Then everybody’s trying to figure who’s building what, who’s ordering what. Everybody wants to show up at Dallas with something trick and new. I’m looking forward to what’s going to go down in three weeks. I have a countdown app on my phone – I’m counting down the hours until I get to stage that thing. You’re going to want to keep your eyes on that orange ‘69 Camaro.”