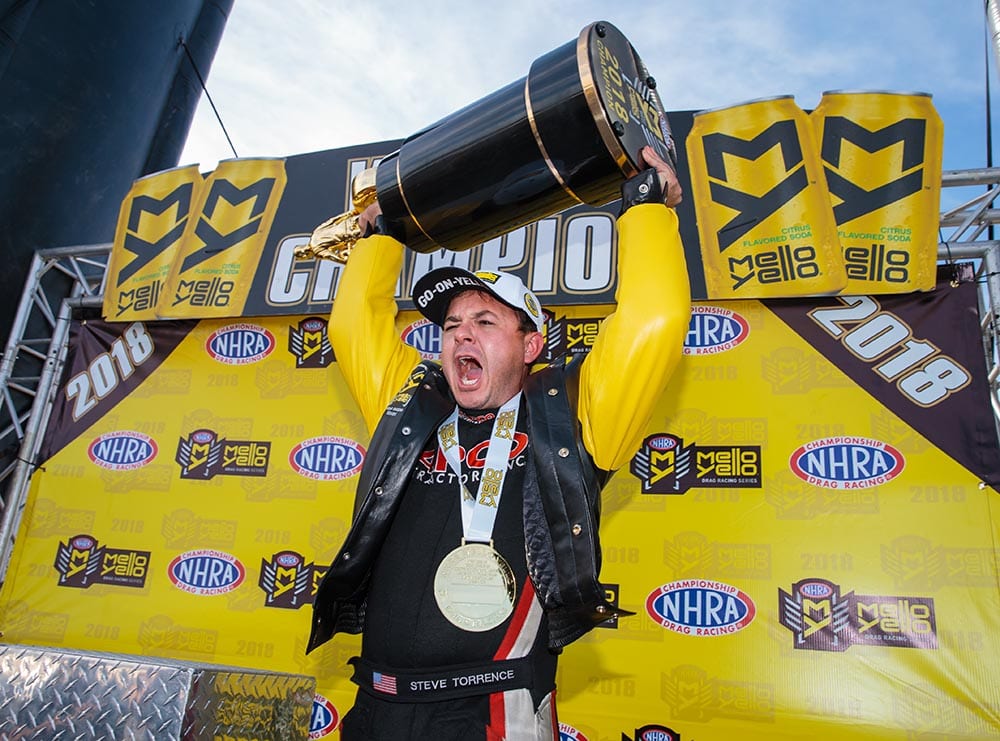 Although the title already was secure before the final round at the 18thannual NHRA Toyota Nationals, Torrence made sure no “mathematical” wiggle room remained for rivals Clay Millican and Tony Schumacher by driving his Capco Contractors dragster to a record fifth consecutive Countdown victory and running his playoff winning streak to 20 straight rounds.

He dispatched Leah Pritchett in an almost anticlimactic final round, winning in 3.751 seconds at 326.32 miles per hour after Pritchett’s car lost traction and fell back. That signaled the start of the team’s familiar “dogpile” starting line celebration.

Stunned, frustrated, even a little disillusioned after losing the championship to Brittany Force on the final day of the 2017 season, Torrence was in a far, far better place Sunday after securing the $500,000 Mello Yello bonus and becoming the first driver ever to win NHRA world titles in both the Fuel and Alcohol divisions.  He was the Lucas Oil Top Alcohol Dragster champion in 2005. 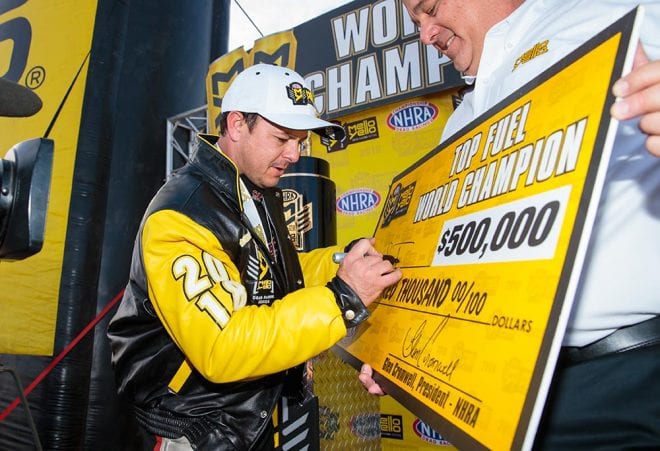 “World champion! Man, that sounds good don’t it?,” Torrence said. “After last year, to come back and have the year that we’ve had, I just can’t say enough about every single member of this Capco team. This isn’t just a job for these guys. It’s a lifelong goal that now they’ve achieved. For the rest of their lives, they are Top Fuel champions.

“I was angry last year. I had a chip on my shoulder,” he said, “but when we didn’t win it, I did some soul searching and when we came back out this year, I had to give myself a little attitude adjustment and I’ve got to tell you, I’ve had fun all year.”

In becoming just the seventh different pro driver to win as many as 10 races in a single season, the Kilgore College graduate slapped a giant exclamation point on a season of vindication for him, his dad Billy, mom Kay and the “Capco Boys” who comprise his extended family.

“The competition (in Top Fuel), in my opinion, is stronger than it’s ever been,” Torrence said.  “So, to win a championship in this time is probably more difficult than it was 10 years ago. There’s zero room for error out there but with the car that Richard (Hogan) and Bobby (Lagana Jr.) and the guys have given me, my confidence has been through the roof.

“It’s not me. It’s not one person,” Torrence said of the success he has enjoyed over the last three seasons, finishing third, second and, finally, first in the pont standings. “This is a team sport and on this Capco team, every member is like the spoke in a wheel. Take a spoke away and the wheel don’t roll. We’re rolling pretty well right now and our mindset is to just keep it going.

“Every round that we go is history and you don’t have an opportunity very often to make history.  I said earlier that if you win ‘em all, the points will take care of themselves. That’s what we’ve been trying to do – win ‘em all. And now we’ve got an opportunity to do something no one else has ever done and that is sweep the Countdown.”

The point leader since prevailing in the second race of the campaign at Phoenix, he won a category best five races during the regular season and entered the playoffs as the No. 1 seed for the second straight year. However, this time that proved to be just the appetizer.

The upshot is that when the tour moves to Auto Club Raceway at Pomona, Calif., for the season-ending Auto Club Finals Nov. 9-11, Torrence for the first time in three years won’t have to worry about all the various point scenarios.

With points no longer awarded for national records, the most anyone can accumulate in the finale, even though the event pays one-and-a-half times more than any other except the U.S. Nationals, is 191 points.

The 35-year-old cancer survivor left The Strip 231 points ahead of Millican, with whom he has battled for most of the season, and 264 ahead of Schumacher.

Torrence becomes the 21st different Top Fuel champion crowned since the NHRA adopted an accumulative points format in 1974. He is the fourth Texan to win the Top Fuel title joining Richard Tharp of Dallas (1976), Eddie Hill of Wichita Falls (1993) and former Lubbock, Austin and Dallas resident Kenny Bernstein (1996 and 2001).

Significantly, he is he first driver regardless of category to win as many as five Countdown events. He’ll go for perfection at Pomona and in this gambling mecca, it would have been difficult Sunday night to find anyone who would be against him.