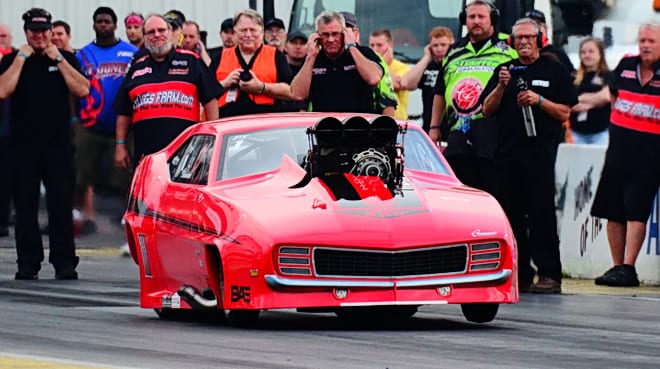 Bubba Stanton (above), the defending Professional Drag Racers Association (PDRA) NAS Racing Pro Extreme champion, said that Gateway Motorsports Park has never before been kind to him, but he hopes that’s about to change this weekend during the inaugural PDRA Mid-America Open. Stanton got off to a good start by placing atop the 16-car NAS Racing Pro Extreme field after just two of three scheduled qualifying sessions were completed for most classes due to recurring rain storms in the St. Louis area. 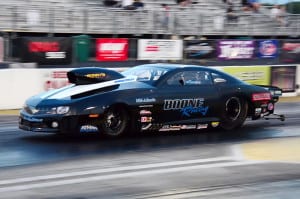 Also qualified number one in the PDRA pro classes with one more session to go on Saturday were Travis Harvey in Switzer Dynamics Pro Nitrous, Jim Bell in Precision Turbo Pro Boost, and Chris Garner-Jones in Drag 965 Pro Extreme Motorcycle.

In the PDRA sportsman classes, Pro Nitrous regular Mike Castellana placed first in MagnaFuel Top Sportsman with a potential record 3.89-seconds pass at 195.53 mph while testing his brand-new 2015 Pro Mod Corvette. Meanwhile, Jon Bradford paced the Dart Top Dragster field with a 3.87 at 188.52 mph, and after just one round of qualifying completed due to rain, Jackie Cannon led the way in Huddleston Performance Pro Jr. Dragster and Nathan Prose held the tentative top spot in Huddleston Top Jr. Dragster.

“I’ve never had any luck here. I mean, I qualify terrible and I usually lose first round here,” Stanton said after going 3.54 seconds at 214.21 mph in the first session to lead the way after 25 entries made qualifying attempts. “It’s nice to be here and doing good for a change. This is a better start than I’ve ever had here before.”

Still, the Potts Camp, MS-based driver admits he was “a little surprised” to run as quick and fast as he did, given atmospheric conditions that were less than ideal with too much water in the air.

“We just turned it up, taking into consideration that the air was bad, and the track took it. By the time I got about 60 or 80 feet out it felt real good and I knew it was gonna’ be a good pass,” he said. “What I was actually trying to do was go maybe a high .55 or .56; I never even thought about a .54, but I think the track was better than we expected and that’s what made the difference.”

Following Stanton and his ’69 Camaro with one more qualifying round planned before eliminations begin Saturday afternoon, were Frankie “Mad Man” Taylor at 3.55 and 212.09 mph and Tommy D’Aprile with an impressive 3.58 at 211.10 in the debut event for a brand-new 2015 Corvette.

“That was only the fourth run on the car and it was the first one we made a full pull to the finish line,” D’Aprile pointed out. “I’m so excited and feeling blessed to have this opportunity and I have to thank (team owner) Mel (Bush) and (crew chief) Brandon (Snider) for making it happen.” 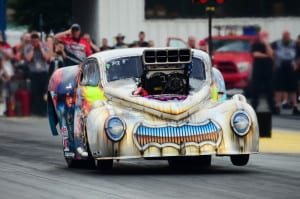 Following in fourth place was Wesley Jones, who very fortunately avoided disaster in his second attempt after his ’41 Willys swapped lanes about halfway down the track, right in front of Jon Stouffer, who managed to slot in behind Jones while safely slowing down his ’70 Barracuda.

In fifth was Mustafa Buhumaid of Dubai, who won the season-opening race in Dallas, while Randell Reid, Mike Recchia and Don Wootton filled out the top half of the field. 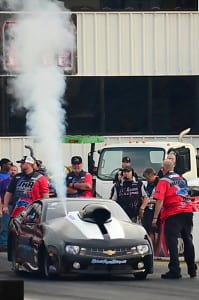 Travis Harvey, last year’s PDRA Top Dragster champion, turned his attention back to doorslammers this season and on Friday night at Gateway secured his first provisional number-one Pro Nitrous start. Driving the Boone Racing 2014 Camaro with a 959-cubic-inch Sonny’s engine under the hood, Harvey ran 3.72 at 199.61 mph to oust Jay Cox and his Buck 990-equipped ’69 Camaro from the top spot.

“I don’t know if it’s because we went out early and the track was maybe a little green for our first run, but on that one it just didn’t run out the back end as well as we thought it would. The track was in great shape at night, though, so we tuned it up and I was pretty happy when it went a .72,” Harvey explained.

“I think there are a few cars here that can go faster than that, though. Jay (Cox) for sure and I think we can go faster, too,” he added. “We’re probably going to have to.”

Cox, the number-one qualifier at the previous two PDRA events in North Carolina and Louisiana, held the position in St. Louis after one session with a 3.74 at 200.56, but his ’69 Camaro veered out of the groove on his second attempt and he was forced to shut off early. In third with one more qualifying round to go was “Stevie Fast” Jackson at 3.76 seconds, followed by Tommy Franklin and Mike Castellana to round out the top five in a field of 24 entries. 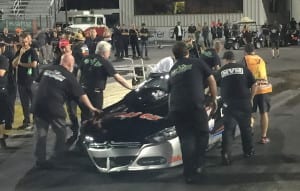 Second-generation driver Lizzy Musi also made her Pro Nitrous return in Frank Brandao’s “King Kong” 2015 Dodge Dart at Gateway after it underwent extensive repairs following a season-opening crash in Dallas. Unfortunately, the car sustained more damage to its nose Friday night when at the end of its burnout it darted right and punched the short, lane-separating wall leading up to the starting tree. Damage to the right, front corner of the car appeared minimal and largely cosmetic, but more repairs would be required before it could race again. 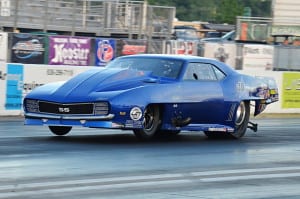 After two rounds of qualifying, official PDRA sheets showed 25 cars made attempts to break into the 16-car Pro Boost field at St. Louis and Gerry Capano was quickest of them all with a 3.82-seconds pass at 191.54 mph in his supercharged ’63 Corvette. Capano’s run was disqualified, however, after PDRA officials determined something under his car was too low–below the mandated three-inch ride height–causing it to interfere with the starting line beams.

Inheriting the point position was Canadian Jim Bell, who jumped from 10th to second overall in the final qualifying round with a 3.87 at 201.79-mph pass in his twin-turbocharged ’69 Camaro. The blown ’53 Studebaker of Joe Baker was third at 3.88 and 190.65, with Bell’s teammate Kevin Fiscus fourth in a twin-turboed 2012 Mustang and Jeremy Ray fifth with his supercharged 2015 Corvette.

Capano’s earlier run of 3.95 at 190.67 was allowed to stand, which placed him 12th on the list with one more qualifying opportunity remaining before eliminations were set to begin Saturday afternoon. 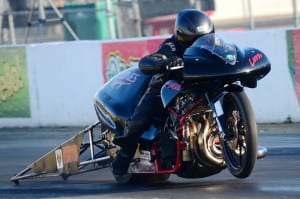 For the first time this season a new name was on top of the Pro Extreme Motorcycle qualifying list at the end of the day as Chris Garner-Jones secured the spot with a 4.04 pass at 175.66 mph aboard his 2014 Suzuki.

Next was Canada’s Terry Schweigert at 4.06 and 171.25 mph and Eric McKinney, who so far has qualified number one and went on to win each of three PDRA races held so far this year. Garner-Jones’ father, T.T. Jones finished off the top half of the eight-bike field after 10 riders made qualifying laps for the PDRA Mid-America Open.

The all-eighth-mile PDRA event at Gateway Motorsports Park, straight across the Mississippi River from St. Louis, will resume with one more qualifying session for all classes starting 11 a.m. on Saturday, followed by elimination rounds at 4 p.m.