Prior to each ADRL race, Pro Extreme team co-owner Camp Stanley pens a unique “press release” detailing the latest goings on surrounding the ’68 Camaro his son, John, drives on the circuit.

Camp’s latest missive details the installation of a new mural on the rear door of the Stanley & Weiss Racing Team’s hauler, “Clifford” (above), as they prepare for the ADRL Hardee’s Georgia Drags VII this weekend (Apr. 13-14) at South Georgia Motorsports Park. 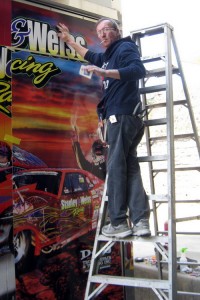 Now that spring had finally sprung out here in the Appalachian hills it was time to get new artwork installed. This artwork was originally designed by our webmaster, the inimitable Mark of goDragRacing.org fame.

This original artwork was a three-dimensional, see-through car project that Mark had wanted to get accomplished for several years. And for those who have been reading our website for awhile, you would have seen the finished product from Mark in an article in December of 2011 as a screen saver. It was so well received by all who viewed it that we decided it would look good as a replacement for our existing goDragRacing.org cartoon on the rear door of the trailer

So, who else to go to and have the project tweaked and manipulated to fit an area it was not designed for but Tim Fraker Signs! 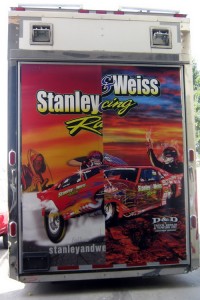 Tim and I sat and talked about what we wanted to do and how it needed to be moved hither and yon to fit the eight-foot by twelve-foot area it was now intended for. When we completed the mind melding of our thoughts, Tim then handed the chore of making them become a reality off to Lee, his computer-picture-bender-all-arounder-guru person.

Lee worked his magic taking things from here and moving them over there in between his real work projects that generated revenue for Tim Fraker Signs. He even went so far as to take the project home and whittle away at it.

And then of course like all projects everywhere, the owner would show up out the clear blue and say, “What about if we…” or “How hard would it be to…” and Lee being the consummate professional would smile and say, “Sure, that can be done,” all the while muttering under his breath, “It’s a good thing I like you!”

But work his magic he did and herein you all will see the finished project. 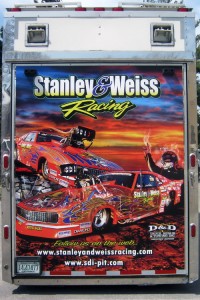 So off Clifford and I went to the Tim Fraker Signs business emporium for the installation of said graphics.

The graphics installer that Tim employs has been doing things for me since he worked for Tim back in The Wild Bunch days! That is going on TWENTY FIVE years! “Hippy,” as he is affectionately known to one and all, is not a morning person and it was not who was expecting to see on this Monday morning! But we started in on the removal of things that were in the way and it was on to the ladder and beginning to ply his trade for the aforementioned Hippy person.

And when the project was completed it was another Tim Fraker Signs And Graphics masterpiece, via the original brain cells of goDragRacing Mark, as manipulated by Lee and installed by The Hipster!

Please come by (the Stanley & Weiss pit at SGMP) and give us your thoughts after looking at the detail of this see-through masterpiece.