In 2013 the Stanley & Weiss Pro Extreme racing team set a brand-new record for ourselves to start off the season on a positive note. We had planned on attending the test session at Palm Beach International Raceway and to accomplish that we needed to be sure the Camaro would be ready. Which is the reason for the “brand-new record” comment.

Almost every year (driver) John (Stanley) and I (Camp Stanley) never manage to do what we say we are going to. And that is to be ready to go before we have to leave for the first race of the year–we are generally still bolting parts on the car as it goes in the trailer and then putting the rest on at the track!

The only major changes over the winter were to attempt to lighten the car a bit more and to rework our rear wing. We had discovered at the early part of last season that the car had entirely too much down force and we had tried different things to help with the problem throughout the season. With the help of Garret Livingston from Garret Race Cars we formulated a plan to decrease the size of the table top part of the wing and to take a few degrees out of it as well. This little trick was suggested to me by Jeff of Composite Specialties in Memphis at the latter part of the season. When the project was completed I sought out my shock guru person, Eric from Penske Racing Shocks, and got his suggestions as to what he thought we should do now that we had made our changes. His suggestions were put into the chassis setup and we were set to go. 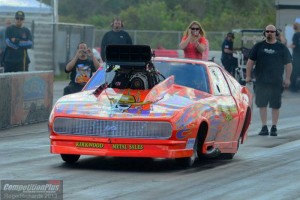 The weather was supposed to be excellent the entire weekend. BUT we all know how the weather people don’t always know the truth, dont’t we? That being said, I arrived Friday evening at the track and parked out of the way awaiting my turn to get into the track on Saturday morning so we could setup and be ready for Sunday am first thing. I met up with Mitchell and Jason Scruggs, along with Roger Henson, each of whom had graciously agreed to let us test with them. The fuel cars were have their two night testing sessions that evening and were getting ready and then the rains came! And that as they say was that!

Sunday dawned a nice sunny day and we went about getting ready for our first hit of the 2013 season. After the track was readied we went to the line and the first shot yielded us a respectable 3.7 run at 202 plus. We felt this was good for a first shot since the car was set up really soft to be sure it would go down. We made several more hits on the Sunday with the best being another 3.7 at 204 plus. We had a cylinder going in and out of service before the sixty foot on all the runs so we elected to install a new set of MSD plug wires for Monday morning. And that made a such a difference in the first part of the run that John had to pedal the car because it was spinning the tires and then, OF COURSE it blew the burst panel right as he shifted it into second gear. And that, our friends is why it is called “testing”!

We believe we have found a few of the bugs that would have bitten us at the first race in Rockingham and we are confident with the changes to the rear wing area. The car went 204 and change with no effort and did not move around. AND that was with the tall wicker bill we started out with. When we install the new composite pieces that have been manufactured by Garret’s brother, Eston, at Garret Race Cars, we hope to gain a bit more weight savings and a bit more speed.