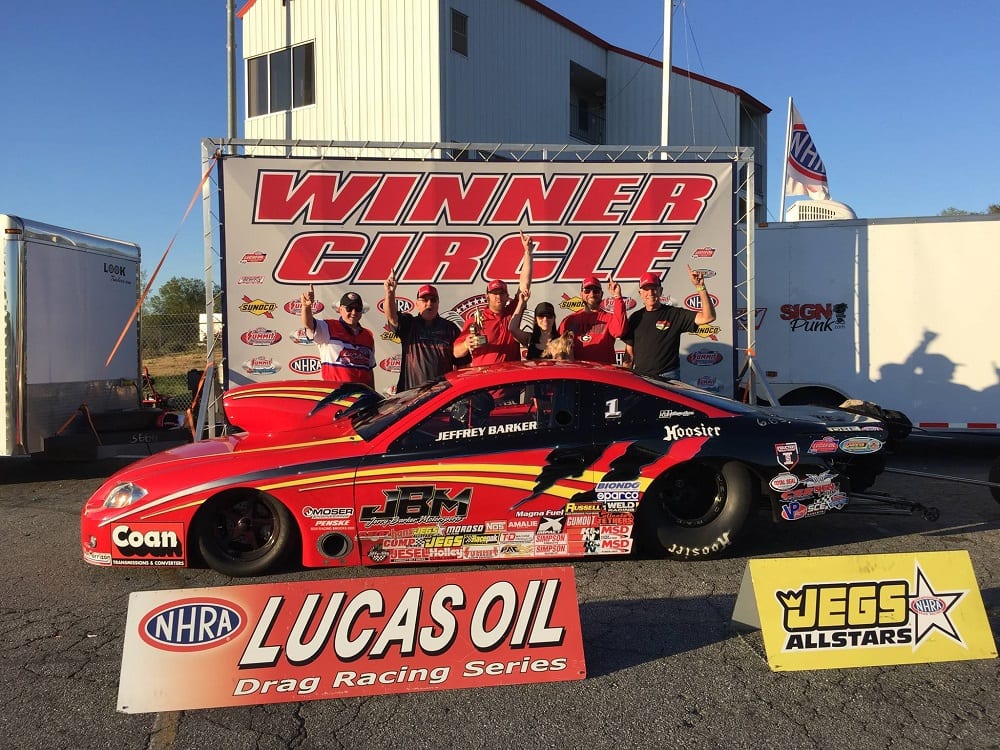 The couple that races together stays together. Sometimes sharing a passion with a spouse can cause conflict, especially when both are highly competitive and seeking success. For Jeffrey and Lindsey Barker, however, their mutual love of drag racing not only keeps them close, it’s what brought them together in the first place.

Back in the early 2000s, the two crossed paths at Silver Dollar Raceway in Reynolds, Georgia. “I had a friend there who knew Lindsay, and we wound up meeting. Over the next year or so, I’d go to divisional races and I’d go snoopin’ around her pit area,” admits Jeffrey, who was immediately smitten with Lindsey.

“I didn’t want anything to do with him at first, but he wouldn’t stop calling and we finally went out on some dates,” she adds, glad that she eventually gave in to Jeffrey’s persistence. With two distinctly different personalities – she’s quiet while he’s outgoing – the two complimented each other perfectly, and in 2010, they said their vows and committed their lives to one another.

Jeffrey came from a drag racing family, as his parents once owned the now-defunct Warner-Robins Dragway in Georgia. He started with junior dragsters when he was just nine years old, but once his family’s track closed, he took a hiatus until high school. At that point, Jeffrey picked up where he left off.

“I did some street car stuff and some grudge racing, and when I turned 16, I got my license in Super Gas and was doing bracket racing as well,” he recalls. Meanwhile, Lindsay also had family ties to racing as her father had been involved for years and piqued her interest as a child. She started racing when she was ten, also in junior dragsters, and began bracket racing and Super Gas racing when she was about seventeen. Based on their pasts, it’s no surprise the two wound up together.

Jeffrey ran his first NHRA divisional race in his late teens in Gainesville, Florida, and made it all the way to the Super Gas semifinals. In 2003, after picking up a win in Super Gas at a national event, he moved to Top Sportsman and immediately found success with a win during the Citrus Nationals at Palm Beach International Raceway in Florida. Jeffrey was named Rookie of the Year that season for the NHRA Southeast division. 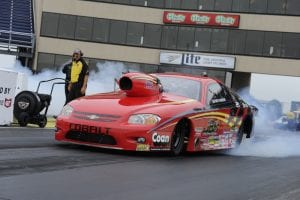 Over the years, Jeffrey racked up an incredible number of championships, including seven total NHRA Division II Top Sportsman titles in 2007, 2008, 2009, 2011, 2013, 2014, and 2015. Although he’s not quick to boast, Jeffrey readily admits, “I’ve won roughly seventeen Top Sportsman divisional races, one in Super Comp and one in Super Gas. I won the JEGS All-Stars race in 2015, the Atlanta national NHRA event three times, and the NHRA Cajun SPORTSnationals in 2009.”

In 2015, however, Jeffrey won his most prestigious title when he claimed the inaugural 2015 NHRA Top Sportsman national championship. He accomplished the feat by scoring wins at four events along with three runner-up finishes.

It’s hard to top a national championship, but Jeffrey’s most memorable win was actually at a divisional race in Gainesville, Florida, in the late 2000s. “It was the first time me and my dad [Jerry Barker] raced each other in the finals,” he reminisces – a matchup Jeffrey wound up winning. “We wound up racing a few times over the years, but he never beat me. I’m not saying he couldn’t beat me, he just didn’t. We both always went all out for it, and it was a lot of fun.”

The husband and wife Barker duo’s legacy is comprised of more than just Jeffrey’s successes, however. Lindsay, too, has quite an impressive résumé, including multiple wins.

“I won a lot of divisional races when I was younger, and won the NHRA Gatornationals when I was 17 or 18,” she says. “When you’re young and it happens so quick, you think it’s easy peasy. Then you realize it’s not.” 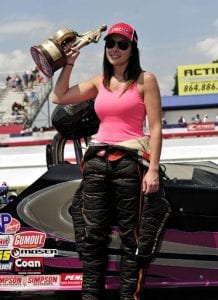 She did a quick stint racing alcohol dragsters around 2007, and won the NHRA Southern Nationals for Top Dragster in 2015. “It was so exciting when I won last year,” exclaims Lindsey. “Jeffrey was in the finals at that race, too, but he lost. Then we went to Bowling Green, Kentucky, for the divisional race at Beech Bend Raceway Park, and we were both in the finals again, and I won but and he lost, but he wins way more than I do anyway.”

Once, before they ever even met, the two wound up racing each other at Silver Dollar Raceway during a Friday night bracket race. “She doesn’t remember this, but I was driving an old ’68 Camaro, and I went up against her. I knew who she was, but she didn’t know me. She red-lighted, and other that that, we’ve never raced each other – not even goofing around. It’s probably best for the marriage that way,” laughs Jeffrey as he recalled the memory.

Juggling a work-life balance for just one driver can be pretty challenging, but somehow Jeffrey and Lindsey manage to make it work for two. “It’s definitely hectic because of all the races we go to, and they run our classes pretty close together,” he admits. “Trying to get back to cool the car down, turn wrenches, and get the next one ready can be a lot, but we have a system and make it work.”

Jeffrey himself manages the vast majority of everything for both his and Lindsey’s cars. He does all the maintenance – front to back – although is sometimes joined by his father, who lends a hand crewing when he can.

“I’m not going to say I handle the stress better than her, but I have so much to do that my mind just goes into autopilot mode and I get things done. After doing it for so long, it’s become a routine. We both know what we have to do, and we don’t get in each others’ way,” notes Jeffrey. Lindsay added that they both do well under pressure, and proudly shared that her husband is a natural when it comes to being mechanically inclined, which helps alleviate a lot of pressure.

With two cars needing attention, one would suspect there’d be some squabbles over who gets what when it comes to spending, but for Jeffrey and Lindsey, it’s usually not a problem. “Even though we’re married, we still keep certain aspects of our finances separate so we can each spend our money doing what we enjoy. Most of the time, though, she gets the newer stuff – mine only gets updated if it has to,” shares Jeffrey in regards to parts purchasing.

Both cars are nitrous oxide assisted, but the builds are quite different. His is a 2006 Chevy Cobalt built by Rick Jones Race Cars, while hers is a 245” wheelbase 2012 Miller Race Cars Top Dragster.

Jeffrey’s Cobalt was originally built for his father to run Top Sportsman, and the carbn-bodied car was state-of-the-art back in 2005 when it was commissioned. Featuring a 5.0” bore space 747ci Reher-Morrison engine with three stages of nitrous and a three-speed Turbo 400 transmission with Coan Engineering torque converter, the combination made 1,450-horsepower while naturally aspirated on an engine dyno. When spraying two of the nitrous systems, Jeffrey estimates he adds another 700-horsepower to the equation. Moser Engineering components make up the Cobalt’s rear end; additional components were supplied from CSR Performance Products, and a set of Hoosier tires provide the traction necessary for Jeffrey to consistently run in the low six-second range on the quarter-mile. 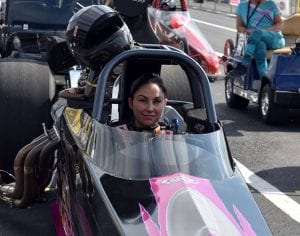 Lindsey’s four-link dragster, however, features an all-aluminum 632ci Brodix-based motor built by Hart Beat Racing & Competition Engines. With three stages of Induction Solutions nitrous oxide on board, Jeffrey estimates her car produces about 1,700-horsepower, which gets transferred to the track surface via a set of Mickey Thompson tires. Just like Jeffrey’s, the rear end is from Moser and a Coan converter is on board, however, it is bolted to a Powerglide transmission from FTI Performance.

With both cars running under the Jerry Barker Motorsports flag, Jeffrey and Lindsey will each be chasing the NHRA championship in their respective classes, Top Sportsman and Top Dragster, this year. The season started out a little rough for each with some engine troubles and no wins (yet), but there’s still plenty of time left for them to make up lost ground. “I can tell you this – when I go to a race, I don’t go to be second. I go to win,” says Jeffrey.

One determined driver can often achieve miracles on their own, but when a driver has the unwavering success of a spouse, especially one who shares the same dream and the same goal, greatness is all but guaranteed for all involved.