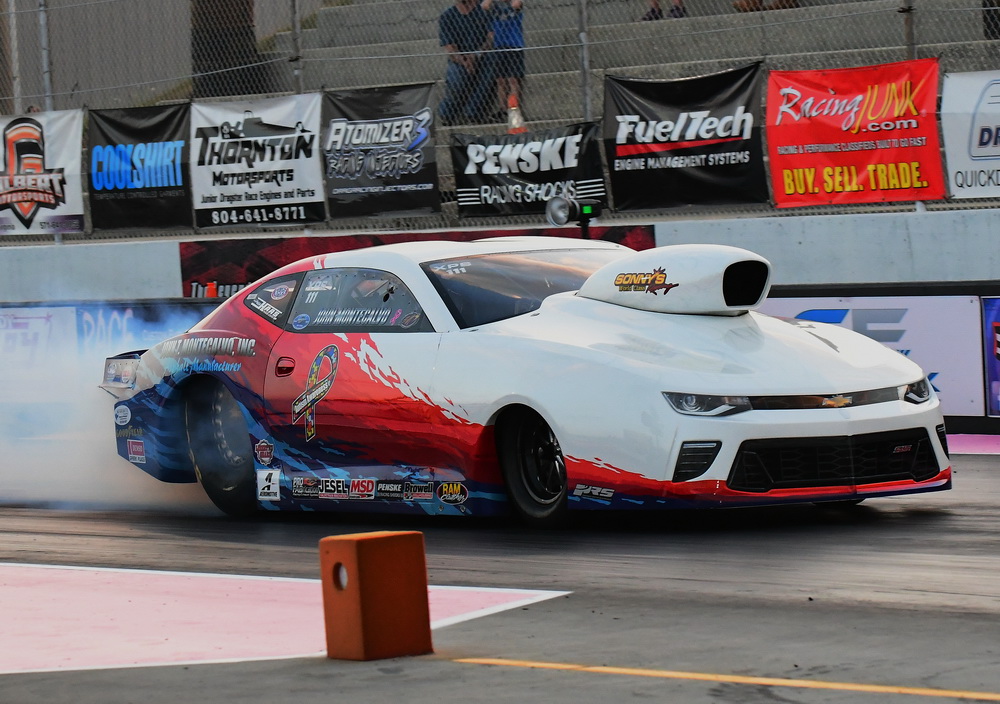 When John Montecalvo first approached Sonny Leonard about purchasing a new powerplant for his IHRA Pro Stock entry, the legendary engine builder wanted nothing to do with him. Now, the newly crowned PDRA Pro Stock world champion is the longest-standing continuous customer for Sonny’s Racing Engines.

“It was the late-’90s and I was with another engine builder, but I realized Sonny was the leader of the pack. He was building motors for Doug Kirk, Billy Huff, Harold Denton, who was number one and my mentor back then, and they were all winning races left and right,” Montecalvo recalls. “But Sonny thought I was just going to take his engine to my guy and copy it, so he wouldn’t sell me one.

“Well, that made me mad, so I told him at the next race I was going to go to each of his customers and offer to buy one and if they refused I’d move on to the next trailer and increase my offer $1,000 each time until someone gave in. When he saw I was serious, Sonny finally sold me a used motor and the rest is history,” he adds, laughing.

That nearly quarter century of shared history with Sonny’s has delivered to Montecalvo nearly countless wins and runner-up finishes along the way to the 2009 IHRA world championship, the 2010 ADRL series title, and now the PDRA championship, which includes two victories–at Darlington, SC, and West Salem, OH–after reaching five final rounds this season.

Speaking from his home on Long Island, NY, the man they call “Monte” is quick to point out, however, when business concerns kept him away from one event, veteran crew chief Tommy Lee stepped in and drove his Jerry Haas-built 2017 Camaro SS to one of those final rounds.

“Tommy’s been great to work with; he consistently makes the right calls and he’s helped make me the driver I am today. I also have to thank my crew guys Bobby Lorello and William Cavallo, who’ve both been with me for many, many years. I’m fortunate to have such an amazing, dedicated and very, very knowledgeable team,” Montecalvo stresses.

“And of course there’s my beautiful wife, Lois Anne, who really makes it all happen. She’s the one who keeps me going, keeps me motivated and keeps everything organized and gets things done. Now that I think about it, she’s probably the most important member of our team!”

Montecalvo also offers thanks to longtime backers Pat Norcia of Ram Clutches, brothers Adam and Andy Lambert at Precision Racing Suspensions, Joe Pando of MSD Performance, and Goodyear Racing Tires. But longest standing of all remains the ongoing partnership with Sonny Leonard and his staff at Sonny’s Racing in Lynchburg, VA.

“It’s been a great rewarding relationship for me with Sonny. He’s much more than just my engine builder, he’s a true friend,” Montecalvo says. “Sonny and his wife Francis, and their daughter Kelly and son Larry, they really are like family to me. I really can’t say how much I’ve enjoyed and appreciated our time together over all these years, both at and away from the race track.”