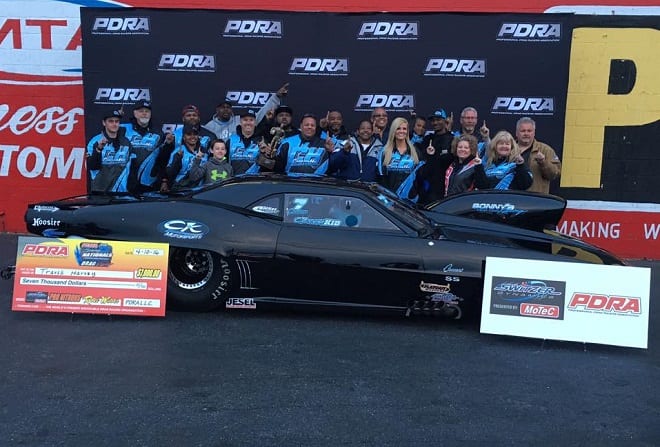 It’s still early in the Professional Drag Racers Association’s third season, but already North Carolina’s Travis Harvey has a decent lead. He’s been in the final of both events held so far, finishing second at the season opener and winning the Spring Nationals at Rockingham Dragway. That currently gives him a 197 point lead over Tommy Franklin, who was in the season opener final with Harvey. Perhaps even more impressive, Harvey has been to four consecutive final rounds. After taking delivery of a new Jerry Bickel ‘69 Camaro, Harvey won the Snowbird Nationals and then qualified number one and scored a runner-up finish at the U.S. Street Nationals. With additional Sonny’s R&D put into place before the PDRA season opener, it was no surprise Harvey made it to the first two finals.

“The team has just gelled in an awesome way, and Sonny Leonard provides us with excellent horsepower,” the Carolina Kid told. “We put this team together late last year, and it has already been in four finals since December.

“Sonny’s really takes care of their customers,” added the 2014 TD World Champion. “One of the things I like about Sonny is when I talk to him on the phone or see him at the race track, it’s not about racing all the time. He’s a great guy to joke around with or just talk to about anything.”

Much ado was made over the quickest and fastest side-by-side Pro Nitrous runs by Tommy Franklin and Steve Jackson. However, with no one able to back up those runs, Harvey still holds the Pro Nitrous elapsed time record at 3.703. It’s been an impressive ride for the Vaughn Myles-owned team, but Harvey is sure there’s more to come.

“I think we have a good chance of breaking our own record this year,” Harvey emphasized. “I definitely think it’ll be broken this year. Hopefully I can do it.”